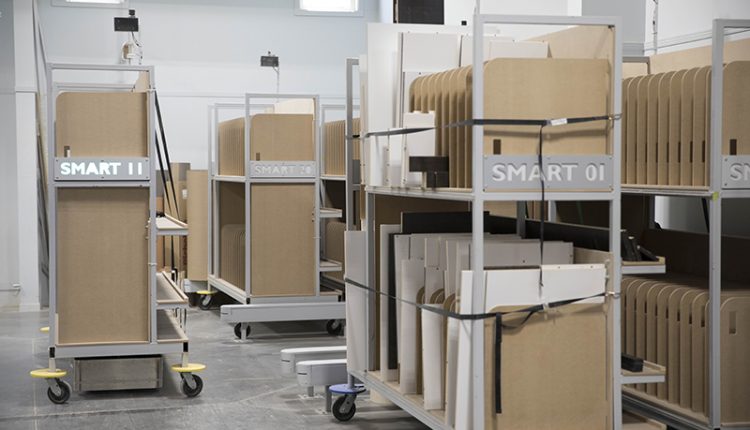 The shop of the future – now

When a wood shop wants to automate its manufacturing operations, often one or two processes get a high-tech upgrade. Not so Muskoka Cabinet Company of Alfred, Ont., down-river just east of Ottawa.

“Every inch of space is planned, equipment racks, shelving and ductwork is designed to be flexible to suit the changing needs of production as we automate,” says president Luke Elias.

Clearing the path for automation that now includes a custom radio-frequency identification (RFID) system, a “smart” enterprise resource planning (ERP) system and lately, automated guided vehicle (AGV) carts, has been the goal of business graduate Luke Elias since he purchased a 13-year-old company in 1989. His brother Eric joined in 1992 from the banking industry and is senior vice president.

The siblings are both from the Ottawa area, and the company also maintains a showroom downtown for sales, and where designers can transmit their software files directly to the shop. Luke leads the manufacturing technology innovation, while Eric oversees sales operations. The latter describes the company selling to as far as Kingston, Ont., to Montreal, Que., and Barrie to Waterloo, Ont.

Even property managers and general contractors can take advantage of Muskoka Cabinet’s cloud deployment and review orders on-site with a tablet computer. Luke Elias notes that in the future, with improvements to the Apple mobile operating system, tablets will be able to read the RFID tags embedded in the cabinets. This will allow for the accurate re-ordering of parts and traceability of defects back to the shop floor, he says.

The Elias brothers have overseen the transition of Muskoka Cabinet from its commercial origins to servicing the residential market exclusively by 1999. During this time, the company management took note of software then on the market that could help design kitchens and make cutlists. By 2000, the company implemented nested-based manufacturing, a first in Canada, according to Luke Elias. “We also had a computer network setup since 1993, something unusual for the time,” he says. In 2003, Muskoka Cabinet introduced cabinets manufactured from strawboard.

The next technology milestone was 2004 when an ERP system was introduced on the shop floor that would communicate between computers installed at each workstation and the front office. This implementation occurred at the company’s new location just up the street from the original one.

That was when Luke Elias learned overnight the real costs of material
handling. “Or better yet, the savings realized by reducing the time spent loading, unloading and remaking parts that were damaged as they were pushed around the factory floor,” he says. Before the move, the company spent months planning and streamlining parts flow with the use of conveyors, a parts sorting station and labelling. Production in the new plant doubled in the first month using the same number of people and machines. “I had no idea we were wasting that much time on material handling in our old factory,” he says.

As years passed and production grew, it became apparent a considerable amount of manual labour was still used to sort, label, load and unload parts. “We knew there were savings to be had if we could automate these labour intensive, mundane tasks,” he explains. “Robots were a possible solution as they could be programmed to handle and manipulate custom-sized pieces.”

To make this next transition, Muskoka Cabinet called upon the expertise of Automatech Robotik of Saint- Apollinaire, Que., in 2012. “Their robotic assisted nesting cell solution was a natural as it solved many of our goals,” says Luke Elias.

The Automatech robotic work cell was designed to have a three-year payback, but actually clocked in at two years, due to the existing deployment of automation in other areas, such as RFID and smart carts. The Wi-Fi activated carts employ flashing LEDs below slots to indicate where operators should place components from the same cabinet order.

Initially, the work cell took the place of such manual jobs as loading sheets on the nesting table, unloading cut parts, cleaning the spoiler board and feeding the horizontal boring machine. “In addition,” Luke Elias says, “the robot provided a unique solution to automate the application of RFID labels and RFID tag insertion as it is the perfect tool to orientate parts so they can receive additional operations.”

This is where the integration of technologies really starts to get interesting, according to Luke Elias. “So far, with no manual intervention we have loaded a sheet on the nesting table, unloaded cut parts from the table, fed selected parts to the horizontal boring and dowel insertion machine, applied RFID surface labels and inserted RFID tags into wood parts that require finishing. We have then created smart parts heading down a conveyor to the edgebanding machine for their first manual operation.

“Parts are edgebanded as required and the part’s RFID tag is read as it leaves the edgebander’s return conveyor. Reading the tag activates a wireless LED array on a slot in a smart cart, which tells the operator where to place the part in the cart. Each slot in the smart cart contains parts for a single cabinet.

“And presto, the parts are presorted, and ready for assembly.”

The current stage of automation rivals anything that could be found at an Amazon warehouse.

When the latest AGV-equipped smart cart is full, it is deployed to a parking area until the cart is called upon by the finishing or final assembly departments. Inventor, builder and former medical doctor, Les Buhler, describes the unique AGV requirements as being “able to move 10,000 lb loads in tight spaces — aisles with no room to spare.” Buhler also helped to develop the solution for embedding RFID tags into cabinet component panels so that they can be read at each process location throughout the shop. The solution involves cutting a narrow biscuit on the spine of each panel so a folded RFID tag can safely be inserted. The tag is designed so its RFID antenna is not damaged by this insertion process.

Each AGV sports eight Lidar units — the same technology being tested by big automakers in driverless road vehicles — and four infrared (IR) “beacons.” Together, the Lidar and IR scanning technologies ensure the AGV carts can navigate smoothly from workstation to workstation, and from parking lot to parking lot, with a stop at the assembly station along the way. No following rails on the floor.

The integration of robotics, RFID, smart carts, AGVs and ERP system facilitates an automatic, part processing, part sorting, part movement, part status, and part costing as each station and process reads each part as it passes through. Assemblers adjacent to the shipping department receive jobs via Windows tablets at each height-adjustable workstation table (to relieve back stress) or can access their jobs by picking a panel off the smart cart for their table’s RFID unit to read.

Even when product is being palletized at the loading dock, RFID readers are used on the shipping doors and the system automatically applies a shipped status to product as it gets loaded on the truck. A robot AGV, much like a giant Roomba floor cleaner, wraps the assembled cabinet order with clear plastic by circling the pallet repeatedly until the shipment is safe for transport.

Luke Elias notes that Muskoka Cabinet has received and continues to receive substantial support from a National Research Council program (IRAP) for technology R&D and implementation. “We would not be as advanced as we are without their support,” he says.

IRAP industrial technology advisor and professional engineer Bernie Schmidt says the NRC has worked with Muskoka Cabinet for five years now — and that it is continuing its relationship. “The story is not finished! “We accelerated their technology adoption and introduced business resources,” says Schmidt, “by developing a robust technology roadmap and an IP (intellectual property) protection strategy.” He noted that after two or three years, IRAP (Industrial Research Assistance Program) was noticing the potential for commercialization of the technological developments at the company.

The opportunities and key innovative elements in the Automatech-Muskoka
robotic work cell project were the integration of technologies, robotics, RFID and ERP. “Truly an Industry 4.0 solution that has enormous potential,” says Luke Elias. “Automatech (also an IRAP client) totally embraced the project and opened up their system to integrate with ours. They are the only industry partner we have ever had to embrace what we are trying to achieve.”

For this reason, smartMRP Inc., Muskoka’s sister company, has partnered with Automatech to implement RFID part and product tracking systems in other shops, and has some projects currently in process that have the potential to fulfil the promise of commercialization seen by Schmidt and IRAP.

The cabinet manufacturing business can be highly profitable, the Elias brothers believe. In 2015, Muskoka Cabinet had a gross margin that exceeded 40, with a net profit before tax exceeding 20 percent. On $10 million in sales, for example, that would translate into a $2 million net profit, the company explains.

Administration and engineering offices occupy 2,000 square feet and manufacturing 10,000 square feet, with the warehouse and assembly departments accounting for 6,400 square feet. “Depending on demand,” says Luke Elias, “we run two shifts in some departments up to 24 hours, and six days a week in others. smart ERP keeps our inventory requirements to just-in-time so little space is required.”

Muskoka Cabinet’s commitment to its smart ERP system means that the constantly evolving tool connects everyone in the organization on-site and off-site with pertinent real-time information. “People are the most important asset in any organization, giving them a well maintained ERP system to work with reduces mistakes and therefore stress and will lead to a happier more productive work force.”

The total number of employees varies from 55 to 60, including the designer showroom, with 25 required for the shop floor.

Production manager Sylvain Gariepy arrived as an 18-year-old to join the company that had only five employees at the time. Learning on the fly came naturally. “I always liked working with wood, but other things came up on the job such as computers and RFID,” says Gariepy. “Some people don’t want to learn new things but they’re limiting themselves.”

Today he continues to look for better ways to make products, including acquiring new equipment and justifying its payback. Working leaner, fixing machines and reducing downtime all play their part, according to Gariepy.

The company pays attention to the cosmetic look of the shop floor to provide a pleasant soothing environment for the employees. “You may have noticed the colour scheme is blue and grey,” says Luke Elias. “Our conveyors, safety fences, duct work, air lines and most equipment have custom-ordered paint finishes. Have you ever seen a light grey robot?”

Making the technology transition to 100 percent water-based finishes was a gruelling process taking several years, however. The company’s finishing line commissioning process was a disaster, admits Eric Elias. “We threw $100,000 worth of materials at it, even though it was tested before being installed in our shop,” he says.

Muskoka Cabinet is a manufacturer and distributor of Breathe Easy Cabinetry. The cabinets are constructed of non-toxic, environmentally friendly products such as responsibly harvested solid wood, formaldehyde-free cabinets, and non-toxic water-based glues and finishes.

Some consumers are quite sensitive to chemical off gassing in wood products, so when Muskoka Cabinet finally did get its finishing line up and running properly, one particularly allergic potential customer put their product to an unusual test. “She actually slept with a part under her pillow,” says Eric Elias. “And we got the order.”

In all, a designers’, producers’, marketers’ and consumers’ dream.