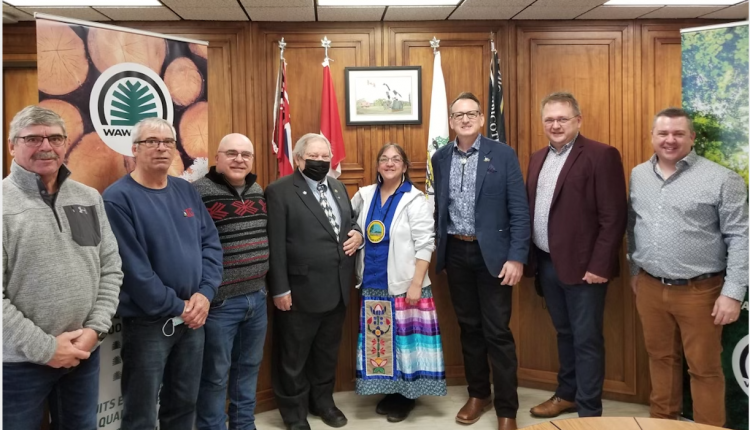 Minister of Northern Development, Mines, Natural Resources, and Forestry, Greg Rickford announced that the Ontario government is providing a grant of up to $15 million over four years to Wawa OSB Inc. through the Forest Sector Investment and Innovation Program to support a new state-of-the-art plant that will produce oriented strand board (OSB).

“Funding this new plant is a win for Ontario, Wawa OSB Inc., and the entire community of Wawa,” said Greg Rickford, Minister of Northern Development, Mines, Natural Resources and Forestry. “An investment of this size is one more way our government is supporting forestry and ensuring we secure the materials we need for our plan to Build Ontario. This exciting opportunity is another example of a new company choosing to invest in Ontario because of an improved business environment, and it will bring good jobs back to this region and benefit Indigenous communities.”

Wawa OSB Inc. is investing $181 million to build the province’s third OSB manufacturing facility, which will expand Ontario’s OSB production capacity to satisfy the growing demand for building materials in Canada and the U.S.

“Through Ontario’s Forest Sector Investment and Innovation Program, we are creating jobs and supporting innovation and economic growth in the North,” said Vic Fedeli, Minister of Economic Development, Job Creation, and Trade. “Our government is proud to support this investment by Wawa OSB to build a state-of-the-art manufacturing facility, and we will continue to support small and medium-sized businesses to bring jobs, opportunities, and prosperity to people and communities in Northern Ontario.”

In addition, Minister of Energy Todd Smith explained, “Our government has reduced electricity rates for large industrial customers by 15% through our Comprehensive Electricity Plan, so job creators like Wawa OSB have the certainty and stability they need. We know that competitive rates are important for the success of Ontario’s forestry industry, which is essential to Northern communities. We are pleased to support expansions like today’s that will support good-paying jobs and build more prosperous communities.”

“This assistance is a key first step in financing our project to reopen the WAWA OSB mill,” said Yolaine Rousseau, Executive vice-president, WAWA OSB Inc. “The Cossette family is very excited about creating jobs in Northern Ontario and increasing our production capacity to better serve North American customers. I would like to reiterate our commitment to working with the various stakeholders, including the First Nations in the territory. Our team is proud and grateful to the Government of Ontario for recognizing the importance of this project to the province, and we will continue our discussions with the Government of Canada to obtain their support as well.”

The funding is conditional on completing key project milestones and finalizing a funding contract between the company and the province. There are still several other milestones for Wawa OSB Inc. to achieve before they can be fully functional, including working with local Indigenous and municipal communities and local Sustainable Forest Licence holders.

Wawa OSB is located east of Wawa at what was previously Rentech which was idled in February 2017 after being purchased in 2013 from Weyerhaeuser. Weyerhaeuser had idled the OSB mill in 2007 (with a workforce of 152). The mill has been operated by MacMillan Bloedel (purchased in 1999) and was built initially by Harvey Jager in 1995.