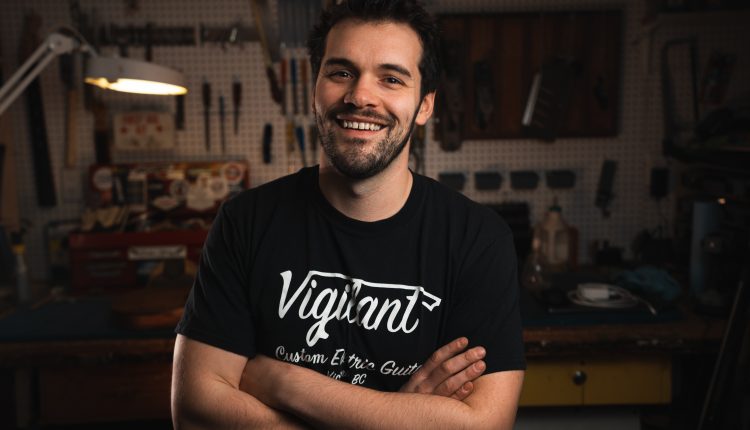 Trevor Woodland knows how to strike a chord with clients. Since 2015, the lifelong luthier has refined his reputation for building one-of-a-kind guitars out of his Vigilant Guitars workshop in James Bay, Victoria, in British Columbia. 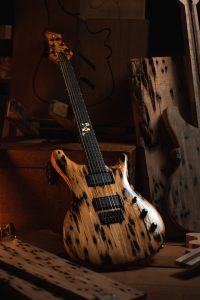 The results are instruments unique and vibrant as Vigilant Guitars’ clients, who range from casual players to touring artists, metalheads to punk rockers, and childhood friends to online customers.

“I guess I’ve built a reputation as someone who will research what’s new and out there and is always willing to take on the weird project other builders may scoff at,” he tells Wood Industry Magazine. “I’m willing to hear anyone’s ideas on their new custom instrument and give honest feedback on my capabilities to complete the project and their ideas on how it can help their music.”

Woodland’s emphasis on sustainable craftsmanship has also helped his business stand out. Focusing on ethically sourced materials from local suppliers, Vigilant Guitars takes pride in being a company that sticks to its roots.

“What makes Vigilant Guitars unique is how it is becoming a platform for Canadian manufacturing,” he says, explaining, “Whether it be domestic wood, hardware, electronics, finishing, or labour, we want to bring the craft of instrument building back home so customers can feel confident they have purchased a Canadian-made guitar, and we feel confident knowing we’re creating a healthy ecosystem of tradespeople and products made where we live.”

Vigilant Guitars is Woodland’s lifelong love for guitars made real. That passion began at home, where he applied classical music lessons to something more his style. 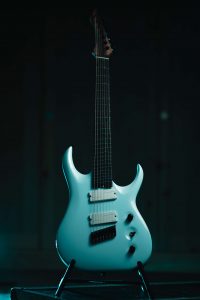 “My mom tried to get me to play piano, but I ran in the opposite direction,” he remembers. “And then, I became that angsty teenager in high school who took a freight train straight to the guitar.”

By middle school, the fire was lit. Woodland began playing bass guitar and honing his sound through concert bands, jazz sessions, impromptu gigs, and more than a few nights of cranking ACDC and Led Zeppelin for inspiration. Over time, Woodland developed a name among his peers for not only playing the guitar but know how to fix them.

“My gear was a little bit cheaper than the stuff my friends had, and it would break all the time. We lived half an hour from town, so I learned quickly that if something broke or if I wanted to modify part of my guitar, that meant going into my dad’s workshop, finding whatever tools were around, and doing it myself,” he says.

Project by project, Woodland fine-tuned his luthier skills. Then, after graduating with an undergrad in history from Vancouver Island University, he continued to hone his craft by fixing up woodwork at a local museum.

“I remember figuring out how to do a French polish because people kept bumping into the panelling or working with stained glass and caustic tiling because that was part of the job, too,” he says. “All that on-the-job training added up.”

It was during this time that Woodland also started working for a local builder over the weekends. And while the job came with no pay, it would lay the foundation for Woodland’s guitar-making venture.

“I was working for free and learning the tricks of the trade. That lead to an opportunity to buy [the builder’s] tools and start making my own guitars to sell,” he says, adding, “When I put out my shingles all I knew was that my next paychecks were going to come from guitars, so I better get started.”

Seven years later and Woodland has built himself an audience. Today, Woodland’s orders are amping up and his portfolio contiues to build. 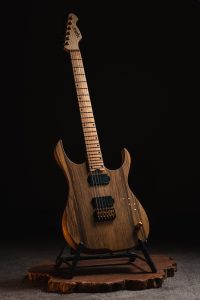 “I’ve done some really interesting builds,” he shares. “There was one guy who had me inlay his mother’s ashes into a guitar and another who wanted me to put a modified vape pen with a computer blower and turn that into a smoke machine guitar. Then, there was a guitar I made out of maple tree for an old friend of mine who is in a metal band called Unleash the Archers, and it was the guitar he used to make the record that won best metal album at the 2021 Junos.”

Woodland says it’s hard picking a favourite build. What he is sure of, however, is that years of making custom guitars for an eclectic range of artists have given him a unique perspective on his own musical ambitions.

“Doing this job has really solidified the idea that I’m not in this industry to make music the way musicians make music; I’m in it to provide musicians with the best tools to make music,” he offers.

From the high school band room to his Vancouver shop, Woodland has learned first-hand what it takes to make a career out of his art. One of the biggest pieces of advice he can give to those coming up the same path is to remember that guitar-making is still a business. 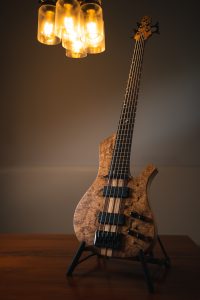 “There’s always that give and take relationship with this where you ask yourself, ‘Am I an artist or is this a trade?’ And the truth is it’s a bit of both,” he offers. “At the end of the day, you’re selling something for money. You have to have the art side of it, sure, but you also need the confidence and knowledge to put your professional hat on and do the paperwork, pay your bills, and grow the business.”

The ability to strike that balance has been central to Woodland’s success. Moving forward, Woodward says his goal is to keep the creative side of the business alive while pursuing technologies, innovations, processes, and skills that will keep Vigilant Guitars viable for decades to come.

“Eventually, I want to be building 50 guitars a year, so we’re looking at ways to increase production and introduce cool new ideas,” he says

For example, he adds, “One thing we’re doing now is adapting smartphone technology that offers a musician kind of a more interactive interface with their instrument. We’re also using 3D printing for some of the components and looking at ways to standardize production but still offer all that customization.”

Whatever the way forward, it’s clear that Woodland’s passion for the craft and talent for business has set Vigilant Guitars on an inspiring track.