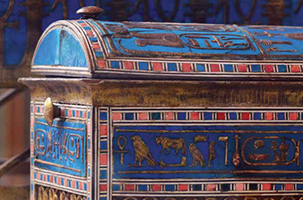 Unlock the mystery of Functional Hardware

YEARS AGO, A MAJOR North American kitchen-cabinet maker was overheard at an international trade event to say, “a cabinet is nothing but a box with a door.” That’s it? For a multi-billion-dollar industry in North America, all it comes down to is a box with a door? If that’s it, why all the fuss?

To get to the answer, we need to look back a ways. Let’s say back to 1,400 BC. There we can find a cedar box with a lid. Granted, a lid is not a door, but at the same time the Egyptians were premier boat builders, made a mean sarcophagus (another box with a lid) and had invented the lathe. It is reasonable to conclude they at some point put the box with a lid on a wall and the lid became a door and the cabinet was born.

One thing we know about the box in question is that it was made of cedar, ebony, ivory and gold. Another is that it was used to store cosmetics and perfume. So as long as 3,400 years ago, humans were using design in two modes: decorative and function.

Today’s consumer is well-acquainted with the decorative aspect of kitchen-cabinet design. As he or she reviews internet sites, attends consumer shows or visits retail outlets, the visual aspects of the products are overwhelming. There is every manner of wood veneer, from exotic species to maple, or any colour or mode of coating, from melamine or powder to metal and paint. The one constant is that virtually all cabinets are still made from wood.

The history of wood as the foundation of cabinetry can be traced fairly easily from the ancient Egyptian example. The boxes and doors were largely made of solid wood with rudimentary hinges for the common people, and could be inlaid or overlaid with precious materials, as in the Egyptian example, for the wealthy. However, wood ages, and as it does, it can warp, check and split, so craftsmen were always searching for new ways to enhance their products’ longevity and value, as well as beauty, and so were searching, as well, for function in design along with decoration. And, yes, whether they invented it or not, the Egyptians were using veneer and making plywood.

THIS POINT IS FASCINATING in modern marketing, since the main thrust of mass production has been toward the design side, with function, especially in hardware, of.ten representing added costs. On the other hand, there is a lot of money in the world, and the economies of Canada and the U.S. are doing well. Boutique outlets continue to compete with Amazon and the big-box stores, and the well-monied and upwardly mobile customers are willing move on a sale if motivated.

If you ask the hardware suppliers what design value their products supply that would have a chance of capturing and triggering that mobile segment of homeowners, they universally have good answers. New hinges and slides are strong, silent and safe — qualities that escape the shiny-foil and marble set. The slides can support up to three grandchildren each and have soft-close features that promise relief from the slamming, rattling and sagging frustrations the cheap stuff produces after only a few brief months. Responsible hardware comes with a lifetime warranty.

Nadja Mann was not always president of Grass Canada. At one point, she was simply a customer looking for a kitchen. The one thing she knew, she says, was that she wanted a kitchen with cabinet doors that closed quietly. All her life, she had been bothered by the sound of slamming cabinet doors, and when she heard there were doors that closed softly, she was in the market.

THE VALUE OF FUNCTIONAL hardware in cabinet design was not lost on the knock-off pirates. No sooner did the high-end hardware designers come up with desirable options, than along-came the pirates with look-alike garbage at a fraction of the price. Anybody that has been offered a “Rolex” on the street knows the gambit. Those only last until the vendor has your money in his pocket. However, some industry leaders believe the entrée of low-quality copies has led to a “race to the cheap” that has hurt our industry, our citizens and our international reputation.

CANADA’S MAIN VALUE on the international cabinetry market has long been its status as a quality leader in design. While the Americans held fast to their face-frame standard, they also looked to Canada for style. Canada, of course, often looked to Europe for its design trends – a direction the States seemed reluctant to look – so Canada was viewed as an influential and high-quality leader in innovation.

Unfortunately, according to Matteo Fregosi, general manager of Salice North America, the manufacturing sector has been swept up in the “good enough is the enemy of best” drive of the marketing sector. The biggest economic variable in the mix, he says, is that not only are off-shore hinges cheaper, they are also distributed so the manufacturer gets a higher margin, so for them it’s profit on profit.

Stephane Vanditti, sales and marketing director for Nuvo hardware in Montreal, agrees that price is a driver, and that in order to try and reach the consumer market he supplies discounted hinges to manufacturers for demonstrators in their showrooms. However, price and a lifetime warranty still don’t address the quality of the products when the consumer is looking for softness and comfort in function, and direct communication with the end user is a challenge.

According to Vanditti, Fergosi and Mann, there have been few or no meaningful communication lines between the hardware manufacturers and the final consumer, so consumers such as Mann described herself are at a disadvantage in finding valid information.

A consumer may, as Mann described, know he or she wants a silent close or a strong, safe slide, but may not understand that, just like the fake Rolex, the part may look right, but stop functioning after the one-year warranty. The products of both Mann’s and Fregosi’s companies also have lifetime warranties.

However, says Fregosi, the story does not stop there. Quality hinges, he says, must also provide proper adjustment, and that is quality that it costs to provide. According to Fregosi, much of the high-end hardware goes into upgrades and renovations. When renovating a kitchen, it is normal for the walls and floors to have settled, causing a loss of level. Therefore, he says, when you have a 36-inch butt door, such as under a sink, and you have four hinges on two doors that butt up against each other, you may need substantial adjustment up and down, and in and out to get the gaps around and between the doors to match the rest of the cabinets. Not only is that not possible with cheap hinges, but even when you make it work, the effect does not last.

“We all make the mistake of look.ing for the prettiness,” Mann says, “but quality has such a high impact.” People spend so many thousands of dollars on their cabinets, she says. Then they find that by trying to save what amounts to $300 on a $10,000 kitchen, they have to bring in an installer to fix sagging doors or drawers in a year-and-a-bit and all their imagined savings are gone and then some. You cannot get an installer to come in for $300. This is the difference between cost and cost-effective.

IF WE STUDY the demands of the consumer, we can see there is a lot of money going into housing, that cost is a factor, but that strength, silence and safety are worth a premium. One could argue, so is the reputation of Canadian cabinetry. A cabinet may be nothing but a box with a door, but that box better work when your customer is spending over $10k — maybe not for 35 centuries, but how about a lifetime?