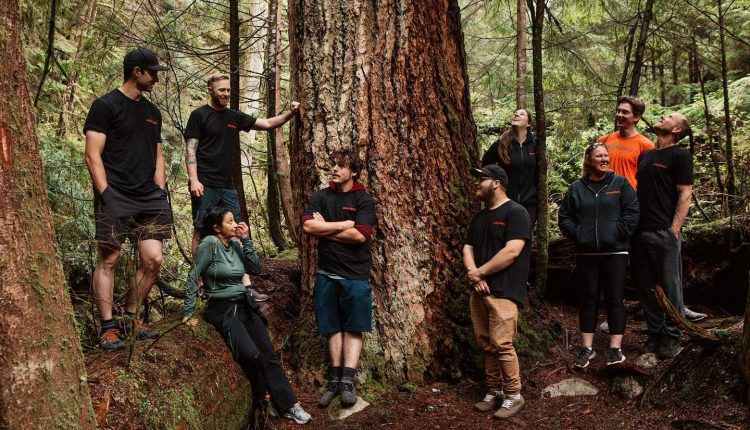 The cost of materials – lumber in particular – has been staggering for the last year or so. While it looks like it’s finally starting to drop, this has negatively impacted many businesses. One business that it benefitted, however, was Unbuilders. Unbuilders is a team of salvage experts. They are former carpenters, roofers, framers, and tradespeople who have made the switch from construction to deconstruction. 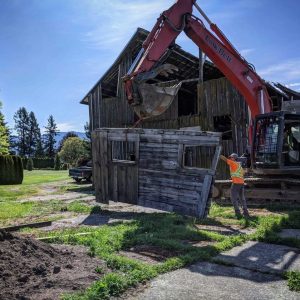 “Our vision is a construction industry where deconstruction and remanufacturing replaces demolition and disposal,” explains owner Adam Corneil.

Corneil flipped his first house at the age of 16 with his dad, and his love of construction stuck with him all his life, and now that he’s a father himself, it’s his full-time job.

“I felt like I was watching every other house get demolished, and I just kept thinking, ‘this is insane,’” he said. “Demolition just isn’t sustainable. So Unbuilders will have work until they learn how to make buildings that will last forever.”

Part of what contributes to longer-lasting buildings is higher-quality materials, which is exactly what Unbuilders is pulling out of these deconstruction sites. 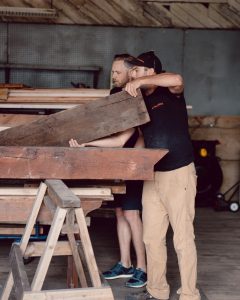 “It’s better wood,” he explained. “Most of what’s used today is lower quality spruce, whereas we’re pulling Douglas fir out of these buildings to be reused. We’re recovering irreplaceable lumber.”

And so what are they doing with this wood? In the past, they’ve partnered with artisan companies that make furniture, cutting boards, garden boxes, and more, but they’re working on growing internally.

“We actually just leased a facility where we can start remanufacturing the wood ourselves,” he told me. “It’s an acre of land that will have 10,000 square feet for showrooms, offices, and shops. We also have a receiving yard at a private landfill and recycling facility.”

They had started out searching for a warehouse, but that kind of real estate in Vancouver is hard to come by at a reasonable price. This ended up working out perfectly, checking a whole bunch of boxes they didn’t realize they had. Now they’re getting set up to better supply building materials to companies looking to build green. I was curious how the cost of lumber had impacted the sale prices of their reclaimed wood. 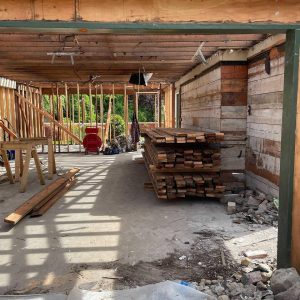 “Typically, 2X4s and shiplap are the hardest to move, so we price them cheaper, but now we can’t even keep 2X4s in stock,” he told me. “We sell out before we even have the chance to remove the old nails.”

So one good thing to come out of the lumber price spike was that it closed the gap between the cost of reclaimed wood and new wood, encouraging more companies to greener building materials.

That comes not only from the kind of wood but also how it was harvested and how it was constructed. Most of the sites that they’re unbuilding are pre-1950s, building dates averaging out to around 1930. These are also the cases that have the highest value of lumber. There’s a good mix of residential and commercial buildings throughout the Vancouver and Victoria area that they work on.

“I’m torn a lot of the time. Often the buildings we’re taking down have a lot of cultural significance; there’s a lot of heritage there,” explained Corneil. “But it’s not my call as to whether the building gets removed or not. We can remove the building in a way that’s environmentally friendly, socially conscious, and community-driven. Then the materials can be reused and respected instead of just demolishing it and everything ending up in a landfill.” 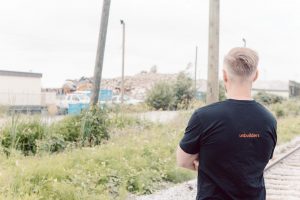 Corneil has always been an environmentalist, but this side of him was nurtured in university when he studied philosophy and anthropology. While it might not seem like these topics have a lot to do with deconstruction, they helped to shape his worldview.

“Having a building torn down can be an emotional event for a community. We ensure that we respect the stories and neighbours to whom these structures play an important role,” said Corneil. “We save these histories by giving materials a new life, typically turning negative experiences into positive ones.”

Corneil also pointed out that Vancouver is the demolition capital of the world.

“The industry shift to deconstruction has massively positive environmental & social impacts. Currently, 4 million tonnes of waste are generated annually,” he told me. “But we can’t expect people to shift their perspective and budget when it comes to deconstruction just because we say so.”

As such, their approach takes a ton of factors into account to show their customers that this is the best option for everyone. 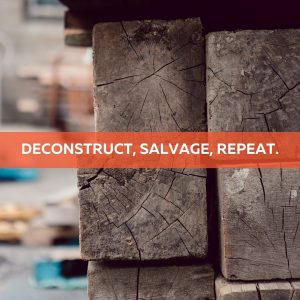 “Deconstruction generates six jobs to every one demolition job – creating the potential for 250,000 new jobs nationally,” Corneil explained from the social perspective. “The jobs Unbuilders provides allow young workers to contribute meaningfully to lessening waste in our society.”

But if ethical reasoning isn’t enough to convince their customers, the numbers speak for themselves.

“It can actually cost less to use us than a typical demolition service,” he explained. “Once you factor in the provincial and federal tax credits, it can cost about $12,000 less to deconstruct than it can to demolish a 2,400 square foot home, for example.”

It’s a setup that benefits everyone: the building owners, the builders, the Unbuilders, the community, and the environment. And if that isn’t sustainable, then I don’t know what is.

TWIG: An Alternative Pathway to Innovation