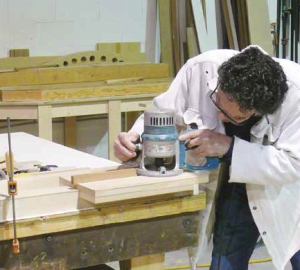 Like salmon fighting upstream in the rivers of British Columbia, one shop in Vancouver is bucking the flow of cheap, mass-market products into Lower Mainland homes.

By creating hand-crafted furniture and cabinetry with highly skilled craftsmen, TLC Design Inc. is producing the polar opposite of big box store product. Owner Joe Edwards explains his philosophy, “I’ve found in the last decade with the millennials coming in … there’s been a dumbing down of design and process of design, and the understanding of what design can actually do for you in your life.”

This trend extends to young designers and architects, not just consumers, according to Edwards.

“A lot of designers are actually not really educated designers — they are people who like design but are armed with a whole pack of magazines and they want ‘something that looks just like this’ and ‘can you do that?’ They have no understanding of what it is, how you get there or what it takes to create something that looks ‘like that.’

“They use the, for lack of a better term, the Ikea model or the Mobler or the Pottery Barn, whoever produces that stuff using really cheap materials in factories that are 20,000 ft² to pump this stuff out. That is what people have become accustomed to. And it’s sad.”

He does add, however, that there still “a lot of good designers & architects.  And there are many really well intentioned people who are in business as designers who love the idea and process of the craft but are not actually schooled formally.

“That said, formal schooling, while an important link to understanding the depths of reason and process of design is not always the only or end all aspect of having good design sense.”

The name of the company, TLC, signifies “time lasting craftsmanship.” Edwards finds design inspiration from many sources, but when he founded his company in 1992, architecture was — and still is — a primary source. He likens the “Time” in his business initials to Big Ben in England, “Lasting” to the Pyramids in India and “Craftsmanship” to the Taj Mahal in India.

“That’s all architecture,” he says, “but within all that there are ways of being and lifestyles, all kinds of symbolism that has a purpose such as spiritualism — the feelings are multitudinous, not just one thing.

“When I take my furniture inside to create atmospheres and living environments those are the things that resonate for me.”

But before Edwards opened the doors of TLC, his journey started with a journeyman carpentry apprenticeship at a custom home builder. Next came a sabbatical to learn log home building, which led to him teaching this art form and skill in various locations around B.C.

Now a journeyman carpenter, Edwards tackled interior architectural trim work and mouldings, along with some commissions for furniture. To refine his skills further, he completed the Furniture Design course at the Sheridan School of Design in Toronto.

When talking to clients these days, design inspiration can come from a variety of sources for TLC.

“It depends on the client and what it is they want and what their vision is — if they even have one,” Edwards says.

“If they don’t, I ask ‘what resonates for them?’ What is it about having something custom made that has inspired them to do that. Often times the answer is that they couldn’t find anything in the stores — it doesn’t fit.

“However, some clients like arts and crafts or they like Emile-Jacques Ruhlman-inspired modern style from the turn of the century or they like Richard Gehry as an architect.”

The environment of the client’s home also provides a starting point that can go in either direction.

“Design inspiration can also come from whatever architectural elements that already exist in a room,” he says, but adds that some people want furniture and cabinets that don’t tie into existing elements.

Edwards also has a philosophical approach to design that draws from the well of his training and experiences. “I want to create living environments that inspire you when you walk into the room — a place you want to come in to. If I can create that special feeling, that’s what makes the difference. Hopefully it will give you a sense of purpose emotionally, intellectually and spiritually. That’s my intention.” 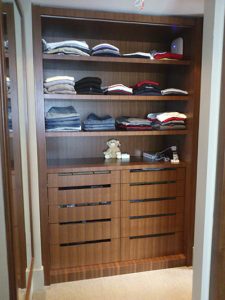 That “special feeling” is not unique to interior design, he notes, but should be.

The pace of modern life is a factor in these decisions, Edwards believes. But there is a price to be paid by purchasing cheap goods.

“People are paying really good money for something that is going to be broken down in two or three years, it’s inferior material most of the time and it’s got what I call a ‘Hollywood smile,’” Edwards says. “It looks fabulous but there’s no substance.

“As soon as you lean on something or do something to it that’s a little out of the ordinary, you have to buy it again. It looks fantastic until you open the doors; the hardware is inferior, the edge tape comes off in six months, but most people that buy don’t know those things.

“It doesn’t cost you that much more to get something really well made and then you’ve got something that means something to you — it has a story.

“The other alternative has no story, other than it just came from a factory where the people who put it together are getting minimum wage — they’re not really craftsman. They sit at one station and they do their part and that’s it.”

When Edwards takes his furniture inside a client’s home, he wants it to create atmospheres and living environments that resonate with people. He has found that his formal training at Sheridan college that included the study of positive and negative space, as well as colour, has helped him create what he feels are positive spaces. However, theory and practise are not automatic so that the latter is key to absorbing these theoretical concepts.

“There are countless hours of practise of creating those spaces and working with them,” says Edwards. “Until you’ve actually done that you don’t really get the opportunity to absorb what these concepts really mean.”

He adds that there has to be a high level of competence in craftsmanship or flaws will show in the finished product one way or another. The achieve this high level, clients can turn to TLC to for just about any project, according to Edwards.

“We furnish every room that you can think of,” he says. “Studies, wine cellars, entertainment systems, master bedrooms, walk-in closets, kitchens, play rooms, bars, laundries. The higher-end homes have all of these rooms.”

Clients of TLC are typically professionals such as lawyers, doctors, executives and business owners.

“Recently we’ve begun working with a business owner who is building a new house in North Vancouver. His builder’s architect recommended us so he’s come into our shop to check us out. The recommendation got us into the process and our pricing was good, so we’ll be doing every room in the house.”

Occasionally TLC will, depending on time lines and on costs, farm work out to specialty firms if they are cheaper and better set up for specific tasks. Mostly, however, the company will tackle everything on a project with its flexible core of skilled craftsmen. 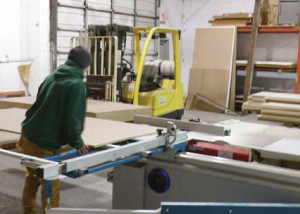 “Currently there are four of us, but I’m in a space that can accommodate 8 or 9 comfortably. This year is showing signs of being a year of growth so I could go up to a full house at the shop. With the four of us, we can put together a house package pretty darn quick.

“That’s another aspect of being a bespoke company or an experienced shop — our organization and level of competence make the biggest difference in the end product. With this latest contract, I’ll have to be back up to six men, a level I’ve had in the past, in no time at all.”

Edwards has high quality standards, but still has to bid on projects in a competitive marketplace, so costing is critical to the success of TLC.

“It’s all about planning,” Edwards says. “That’s how you come up with costs to put into a quotation in order to be considered for a job. Everybody gets three prices from different contractors, different shops to do the millwork package.

“It’s understanding what materials are being used, costing of those things, and the hardware such as pulls, handles, hinges, drawer slides — you need to have all of the specs in order to do the pricing. By specs I mean details such as whether or not it’s paint, different degrees of paint, or is it going to be pressboard or plywood?

“All of that pricing has to happen, and in that time the pricing allows the planning aspect to begin in earnest. Once you have the experience to understand how much time it actually takes to do this then that’s where the rubber hits the road.”
In this competitive atmosphere, TLC is also up against other shops that bring other capabilities to the table for potential clients.

“Different shops will take different lengths of time,” Edwards says, “depending on what equipment they have. This is where the industry has really changed in the last ten years. There is more sophisticated equipment being utilized in my arena. I’ve had to lease a couple of expensive pieces of equipment in order to compete.

“Luckily with what I have to do, I don’t need CNC equipment just yet but I am prepared to go there. If you don’t have CNC in the commercial game (as opposed to custom), you’re done.”

Production at TLC requires it to have “competent people on the floor to compensate for not having certain equipment that competitors have,” Edwards says.

“By competent people, I mean people who have talent, know how to put in a full day’s work and keep their brain straight to minimize any mistakes. Those are the facets of being able to price a job and make a profit.”

If one of these elements in an employee is missing, “it just becomes a babysitting process,” he adds. “Those time drains are what kill you — the level of competence and the understanding of the job.”

TLC has had apprentices in the shop over the years and has one now that is working out well because he is self-motivating. “He’s made some big strides in six months,” Edwards says. “He’s doing some things slightly beyond his capacity but he doesn’t know it — he does a task because he sees us doing it.”

Edwards explains that he’s been blessed to have craftsmen that can perform, especially one in particular that is the best he’s seen in 43 years in the business. “He’s better than I ever was and he’s only 30 and he doesn’t have an ego. All he wants to do is make really good stuff.”

Clearly Edwards believes that the younger generation can do good work, including designers as well as the craftsmen he works with.

“I’ve just started working with another designer who was looking for a shop and she understands real quality,” Edwards says.

“We’re resonating on the same wavelength when it comes to design, now we’ve executed something of hers perfectly and we’re going to be doing much more work together now.”

So just as salmon struggle to reach the headwaters after their trip to the Pacific Ocean, a new generation begins, echoing the latest craftsmanship, design and market challenges of TLC Design.