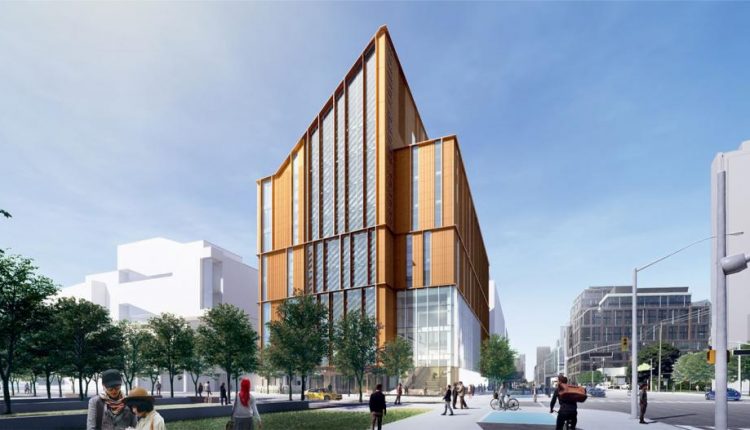 The Arbour at George Brown College

George Brown College’s Arbour development will house the Mass Timber Institute along with the college’s School of Computer Technology. The 12-storey, $130-million building will consist almost entirely of mass timber. The design was a partnership between Toronto’s Moriyama & Teshima Architects and Vancouver’s Acton Ostry Architects, who designed UBC’s Brock Commons.

Construction is slated to begin in 2021 at the southeast corner of Queens Quay East and Lower Sherbourne Street, across from the college’s existing Waterfront Campus. “This new form of mass-timber construction is just now hitting Ontario,” says Carol Phillips, partner at Moriyama & Teshima. “‘Tall wood’ is a new catchphrase associated with using mass timber in a tall building.”

Phillips adds that the jury was particularly impressed by the proposed use of cross laminated timber (CLT) in a slab band. “Our structural engineers, Fast + Epp, came up with this system that used the basic strengths of the CLT. It looks deceptively simple, but it’s very flat,” she explains.

“We don’t have a traditional post-and-beam. We have columns. We call them ‘wallums,’” says Phillips. “They’re wide but not very deep. This creates a flat structural skeleton, and the floor system is essentially smaller pieces of CLT that lay into it. The system is beamless. It opens up the flexibility of where walls or lights can go.”

These “wallums” allow for much larger spaces than were previously possible using posts and beams. Also, much of the building can be erected using prefab panels, which allows for quick installation. Phillips points out that this not only reduces costs, but has a practical benefit too, since wood buildings, unlike steel or concrete, shouldn’t be exposed to the elements too long before being protected by a roof.

“With our design for The Arbour, our process was an integrated process that looked at the structure, opportunities for learning, and the social and communal life of George Brown,” she says.

This led to the creation of “breathing rooms.” Phillips describes these as “two and three-storey rooms that march up the building in a kind of skip pattern on the east and west facades.” These form part of the natural ventilation system, but also create “that social breathing room that students need when they’re not in class.”

The Arbour will also have a “learning landscape” on the northeast corner of the site. This is a three-storey space that has a layered collection of informal spaces nested inside the internal structures of the building.

“So students are kind of nested within the building,” says Phillips. “In creating this learning landscape and these breathing rooms, we feel they’re really contributing to the social and learning life of the building.”