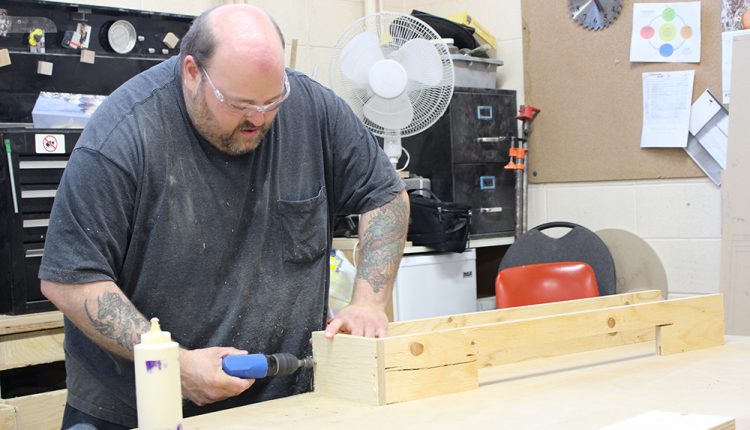 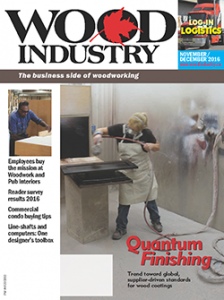 Flying high can be costly when you are logging hours to be certified as a helicopter pilot. That’s what Cory Brightwell, ceo of Woodwork and Pub Interiors in Edmonton, Alta., found out pursuing his dreams and later, his management philosophy.

Nowadays, Brightwell — while he earned his helicopter pilot’s license — is well grounded in his new occupation. “In order to pay for my flight hours,” he says, “I returned to the only thing that I knew at the time.” That knowledge was framing and eventually Brightwell got into a supervisory position and he was off to the races.

Fast forward to when the company moved in April 2016 to upgraded facilities in a new 32,000 square foot manufacturing plant where it currently has 37 employees, Brightwell says management, administration and production went through a process of soul-searching in order to be prepared properly to serve growing market demand.

“We took two days to come up with suggestions for the operations: one day for the administrative side, and one day for production,” he says. The former came up with 8 suggestions and the latter 10 suggestions. Recommendations were supposed to agree with the company’s basic tenants of “ways of being.”

Brightwell proudly notes that shop employees independently added “accountable” and “hardworking” to the list. “They’re self-policing, guys hold each other accountable, so ‘10 minutes late’ doesn’t cut it. There’s no ‘dickheads’ allowed in the code.”

With its strong family focus, the company has developed different policies to get, and retain, effective workers. Some of these include a 10-day paid shutdown over the Christmas holidays in additional to regular vacation time, a benefits package and bonuses.

Brightwell says that a percentage of its profits get distributed amongst staff as a further incentive. “And so it really ties us all together, people really want to work here because they have a shared fate.”

Brightwell says that Woodwork and Pub used the moment of it last shop move to rework its entire system. “We had the Business Development Bank of Canada (BDC) — they have been key to our growth — come in with a series of plant engineers and manufacturing experts that led our staff to design our current shop floorplan.” In the end, every department got a say and was able to vet the new plant design. 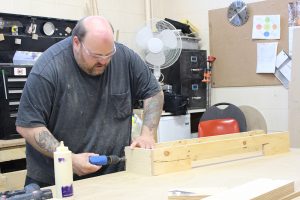 “By the time we were able to move in, everyone had a buy-in into the new plant space, and there was this massive morale boost,” says Brightwell. “When we did make this move it dovetailed nicely with the cultural initiative that we’d led. We implemented some lean initiatives, 5S, and the overall effect has been staggering. Morale and production are way up. I think we’re seeing 30-40 percent gains in production.”

With the production side analyzed, Woodwork and Pub brought in BDC again to work on administrative and operational efficiencies. By November 1 the company was able launch its “future state” of the administrative side of the business. “BDC mapped out how our information flows and exposed some of the weaknesses we had,” says Brightwell. “The growth has been rapid so if we didn’t take advantage of some of the resources that were available to us I don’t know where we’d be.” 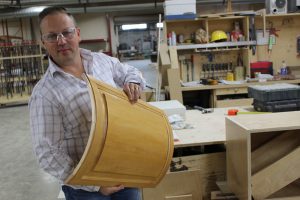 Brightwell has come to administering a successful business by not just following management theory, but through day-to-day experience in the field. “I started to work my way up the construction chain of command building condominiums for a company,” Brightwell says. “About 15 years ago I came across an opportunity to build a restaurant for my sister in law, so I quit my job and became a tailgate general contractor/builder.”

The restaurant happened to be a Wok Box west of Edmonton in Spruce Grove, Alta., and caught the attention of the chain. “They asked me to build two more.”

Eventually Brightwell ended up building about 45 Wok Box locations in two years across Canada. And this is when Woodwork and Pub became part of his life. 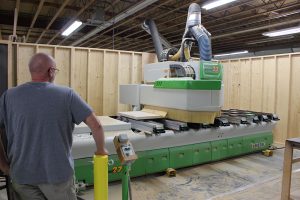 “Massey (Nakir), the original owner of Woodwork and Pub, was my millworker for all of these franchises. He was moving back to Fiji and had to offload his company,” Brightwell says. “I was at a point with a young family and doing a lot of traveling, and I needed to spend more time at home.” So Brightwell took the time to ground himself in the millwork business and pursued this new ownership opportunity.

Founded in 1984 by Nakir, Woodwork and Pub started as a “mom and pop” shop, occupied 5,000 square feet and had four full-time employees. When it was purchased in 2009 by Brightwell, the shop had expanded to 6,000 square feet and six full-time employees. Financing was difficult for this start up as no lending institutions recognize Canadian manufacturing as a viable risk, according to Brightwell. He then assumed the risk himself, taking out a sizeable Home Equity loan and borrowed $60,000 from his step-father.

At the same time, Maurice Peloquin, previously a foreman at Woodwork and Pub, joined the management team and was offered part-ownership and the position of director of production. In 2011, the company acquired 10,000 additional square feet to further expand operations and the team grew to 11 full-time employees. Brent Bell joined management as part-owner and director of sales. Bell, Peloquin and Brightwell continue in their roles today. 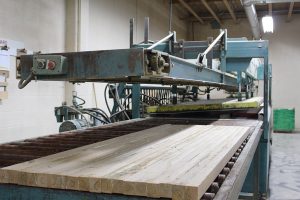 The next year, Woodwork and Pub acquired fully automated processing equipment and opened an upholstery division. The upholstery team works with the artisan woodworkers to create any style of furniture or radius design. The company specializes in restaurant booths, but recent expansion in the upholstery division has allowed it to serve customers in other commercial areas, such as volume seating and bar stools. This has been very well received in the industry and sales in 2014 and 2015 reflect the addition. The entire team grew to 18 full-time employees in 2012, including an in-house engineer. It began manufacturing, shipping, and installing work across western Canada.

Woodwork and Pub then opened a butcher block division and a steel shop in 2013. The 1,500 square feet dedicated to custom steel fabrication now employs a full time machinist to capitalize on the trend of steel mixed with traditional wood techniques emerging from the architectural design firms.

To accommodate this latest expansion, an additional 4,000 square feet was acquired, including two mezzanine levels, increasing the overall manufacturing space to 20,000 square feet with a team of 22 full-time employees. It also successfully completed the manufacturing and installation of two large restaurants in both Ontario and Winnipeg while expanding shipping across Canada. 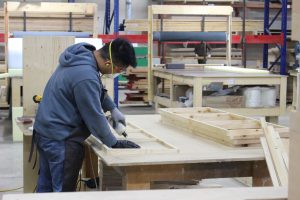 The following year, Woodwork and Pub built a third mezzanine level for another full upholstery team that increased the full time staff to 25. Upgrading to higher production machinery and installing a fully automated industrial radio-frequency glue production line helped minimize butcher block production time and increase capacity. Brightwell notes this specialized equipment for making butcher blocks allows it to reach a production scale. At this time, Woodwork and Pub rebranded this part of its business and introduced the Caribou butcher block brand.

Fabrication of Caribou butcher block demonstrates the shop’s philosophy of continual improvement and innovation, according to Brightwell. Each of the pieces are layered and glued together for a stronger bond and greater support. The butcher block is then aged and treated with the company’s End+Edge Technology, making it food safe, waterproof, and impact resistant while eliminating the need for maintenance. In 2014, Woodwork and Pub launched an “Amazon” style ecommerce site for direct sales of the Caribou line. This product line has given the company exposure to the previously unexplored residential market. 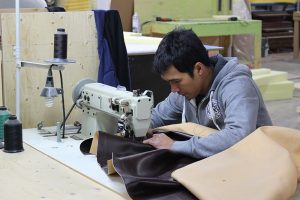 After all of the growth, Brightwell and his company were in some ways just getting started, as the last two years have shown.

In 2015, Woodwork and Pub took advantage of a slowdown in area millwork shops to persuade some new key employees to join the team, bringing the full time staff count to 27. Projects expanded into the U.S. with the first build out in Seattle, Wash., completed in April 2015. Current clients also include State and Main and Famoso Pizzeria, as well as custom builds including Earls Tin Palace, Mercer Tavern and Saltlik Steak House in Banff, Alta.

The company employs an in-house designer that is able to generate three-dimensional rendering shop drawings for their clients’ approval and manufacturing staff. These same plans are downloadable to the CNC equipment to save on planning and programming man hours while reducing the number of mistakes made on the shop floor. Having an in-house designer and draftsperson allows Woodwork and Pub to compete in the design build sector, says Brightwell, where clients “essentially come to us with their budgets and we submit proposals of design millwork. This creates long term relationships with clients since they can prove that the best cost savings measures come right from the source.” He adds that this has been a very appealing innovation for companies such Original Joes restaurants and The Bone and Biscuit Company pet food and supply store chain.

“I feel now with our future state and our current state that as a millwork company we can blow the doors off of everybody out there,” says Brightwell.