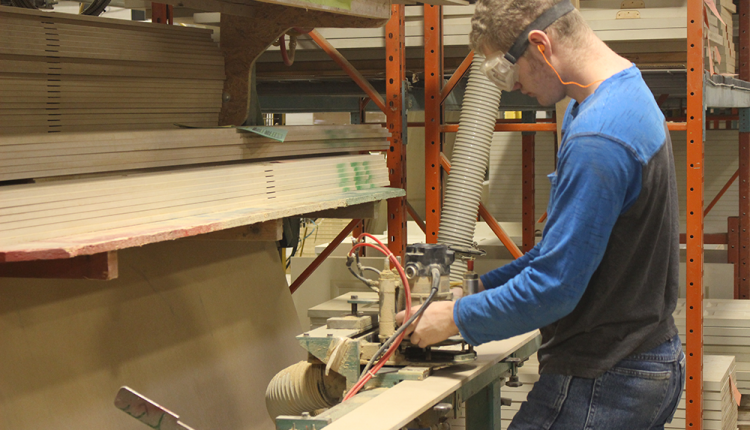 Ferndale invests in its talent pool

Flexibility for customers, design challenge for owners, opportunity for special-skills employees, all at Ferndale

Custom machinery can provide a wood shop the ability to respond to market needs when there’s no one else around with the same capability.

For Ferndale Trim and Doors in Barrie, Ont., its equipment offers local new home builders, general contractors and renovators greater flexibility to fulfil orders with wider jambs and casings than its competition. The company has featured inhouse design consultations in model homes throughout Southern Ontario, a service available to all clients.

The organization, now at close to 50 employees, was originally an installation company purchasing from other suppliers. Due to the lack of competition in the supply end of the business in the area, there was a need to improve the quality of the product, timely delivery and service.

Co-owners and spouses Diane and Ken Frederick have built their company gradually over time, to the point where in late 2018 it consolidated two neighbouring operations into one 25,000 square foot facility. Besides trim and door work, the company also offers custom cabinetry designed by Diane, the woodworker of the two, who grew up close to sawdust.

“My father was the founder of Sia Canada JJS Abrasifs (in Quebec). He and a friend imported sandpaper from Switzerland. I started in the sandpaper industry as a salesperson for my Dad in 1991.”

Diane remembers the first time she walked into a woodworking shop. “It was the smell that got me, and I just fell in love with wood.”

The experience triggered her creative side, she says, “to see a piece of wood turn into a beautiful piece of furniture through people’s talents and creativity.”

Once she started to work with 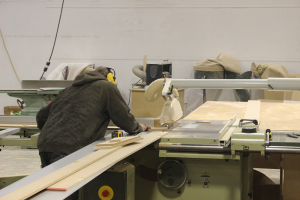 wood, there was no turning back. “I think the peak of my interest came when router tables started coming out — I had to have one! Then I started working and started building furniture.”

While doing construction on the side, Diane built cabinetry and furniture, but found it was not a stable job, so she continued on in sales, moving into fasteners from sandpaper.

“When we had our children, I had to stop being on the road,” Diane says. “Then one of my clients said, ‘I can open up a tool shop for you.’ We moved to Barrie and I was a manager for the tool shop.”

“Then at the time my husband quit his job and came to work with us. After about a year and a half again I migrated to my biggest customer and it was for Ferndale Trim and Doors.”

According to Ken, his job was on a mobile truck selling tools and nails to mostly framers, as well as some interior carpenters. “That grew and we had the need for a store,” he says. “The man in Ferndale had space and he wanted to start a retail outlet for the trim and doors. We came to an agreement where I would sell his trim and doors for him and also create a retail space for me. We kind of worked together in the smallest part of Ferndale Trim and Doors. “He was ready to get out and we were ready to buy it. The opportunity was there.”

Diane went to work at Ferndale initially to start the storefront, but two months later became operations manager then general manager two years later. Another two years after that the Fredericks bought the owners out and became full time owners of Ferndale Trim and Doors in 2009.

But running Ferndale meant not just doing trim, doors and millwork. “We were also a small cabinet shop and initially we were not going to continue that part of the business,” Diane says. “It was my playroom — I would be in there every Saturday building the mantles and all of the stuff for the week.

“Then we had to start hiring cabinetmakers because I had no more life.” The “other” side of the business kept growing, too, with builders and customers who would ask, “could you do this?” Diane would say that she could build the cabinets and design something more specific or unique to a project. 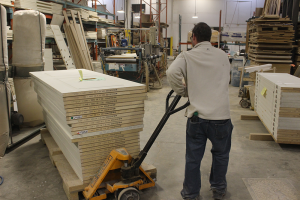 “Next thing you know all of our work is word of mouth for the cabinet division,” Diane says. “It is people I have done something for and then doing something for their friend, their lawyer, neighbour or banker. I design most of what we do. I can probably count on my two hands what has been designed by somebody else in the last 10 years on the cabinet side.”

Diane is clear that the woodworking shop has always been her passion. “But I can’t have a business that feeds 50 peoples’ families by just my passion!” The trim and doors are the company’s bread and butter, Diane and Ken agree. It also feeds Diane’s passion while providing a huge source of leads and contacts for the woodworking shop. Having two operations under one roof provides a great balance, too.

“When one is a little bit slow, the other side magically picks up and vice versa,” says Diane. “The fact that we are in the house doing the trim makes it is easy to add millwork and to say, ‘what about a built-in on this side? What about a beautiful mantle? What about a bookcase or a wet bar down here?’”

They have found having the two businesses simplifies scheduling for customers. “That is how our growth and our success has been,” Diane says. “It is an added bonus for a lot of builders. They don’t have to try to source from elsewhere — we are already there.”

The people that work at Ferndale come from different backgrounds and have different strengths. On the production side of the trim and doors in the facility, a number on staff who started with the basics are now fully-fledged installers and cabinetmakers. “Sometimes it’s just a guy who started out on a machine and we saw potential,” says Diane. “I find that it’s great for us to find talent, where we can say he’s got more of an eye and a creative sense.

“As much as we do need people who are more production-focused and doing the same thing over and over again, we can very easily see the ones that need the creative side. They need variety because they have talent.”

Ferndale has certainly benefitted from having access to that talent pool. “Most of my installers that are with us started out either on the door machine or the frame building machine,” says Diane. “It is also giving us an opportunity to give people advancement and to have a trade and a craft.”

Recognizing the potential in their personnel and people in the community who are struggling to fit in is a point of pride for the Fredericks. The couple work with Habitat for Humanity, a local food bank and Talk Is Free Theatre group in Barrie, bringing their construction expertise and material donations as needed.

They have a son and a daughter, with the former on the autism spectrum, a condition that presents specific life challenges. Their understanding of ASD (autism spectrum disorder) has led Ferndale to hire two individuals with ASD in recent years, as well as provide seasonal work for their 19-year-old son as he attends college.

“With people in general — I find that everybody has quirks,” says Ken. “There is not a single person who I have ever met, who if you know them long enough, doesn’t have some kind of a quirk. “With autism, it tends to be a social quirk which is noticeable very quickly.” Diane and Ken have found with ASD, it is not generally a learning quirk.

“Often their quirks are their strengths,” he says. “Things that become very valuable. They do great work and they are willing to do it.”

Doing great work can have unintended consequences for those that employ people on the autism spectrum, however. One employee with ASD, Jordan, who had trouble initially with sensory overload from noise in the shop, is quite detail-oriented when it comes to tidiness and quality control.

“He still pulls a lot of our doors (out of the production line) and at first every single door had a flaw!” recalls Ken. “They did, but they are so tiny, most people wouldn’t even consider them a flaw.”

The great thing about Jordan is that he does everything that is asked of him, according to Ken. He has become so appreciated for his work ethic that now “my cabinet installer wants to work with Jordan.”