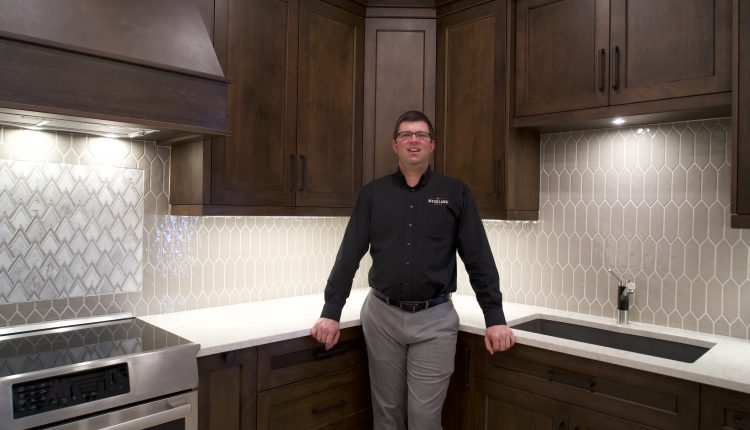 With a thriving business, a happy marriage, and five amazing kids at home, Laverne Martin might have a tough time choosing the best day of his life.

Deciding on which one was the worst might be a little easier.

“One early Sunday morning, we got a call from our [company’s] next-door neighbour saying there looked to be smoke coming out of the building,” he said, recalling one spring day in 2012. “I followed the fire trucks from Moorefield over to here. It was not the best Sunday of my life.”

Two years before, the president of Woodland Horizon moved his growing business from a small 2,000-sq.ft. workshop on his beef farm near St. Jacobs, Ont., to a 4,800-sq.ft. facility in the village of Drayton, about a 40-minute drive north of Kitchener. A former woodshop that had gone out of business, the building offered everything Martin could hope for: room to expand, easy access to the rural lifestyle that Martin preferred, and proximity to the growing Southwestern Ontario/Georgian Bay/Muskoka markets that would fuel his company’s growth.

The firefighters never determined what started the fire that completely gutted it.

“That’s one thing I will never forget,” Martin said, recalling the moment he arrived shortly after the fire trucks to find the whole building ablaze. “The Monday morning following, I drove in here… It was one of the lowest points of my life.”

As it turns out, he wasn’t the only one who showed up that day. While Martin was still trying to process what happened, a man he was casually acquainted with pulled up in his truck, ready to take action. “He was the first guy here,” Martin said. “He jarred me out of my self-pity, talked about next steps. I give him a ton of credit for pushing me out of that.”

That supportive fellow turned out to be Clare Martin (no relation) of Homestead Woodworks, a Hawkesville, Ont.-based business offering the same type of cabinetry and custom interiors work as Woodland Horizon. But the two men weren’t competitors that day – in that moment, they were businessmen who knew what it was like to have people counting on them to get the job done.

There was a lot of other help, too. Thanks to Laverne’s family, his employees and everyone else in the surrounding area who turned out to help however they could, by that fall Woodland Horizon re-opened in a brand-new 6,400-sq.ft. facility on the same property, just minutes from downtown Drayton and its famed Festival Theatre.

“It was a very humbling time to realize how many people went out of their way to help us get things back on board,” Martin said. “I think the biggest takeaway for me was how fickle life is. We think we have things under control, and one morning totally changed my perspective.”

It’s fair to say things have been on an upswing for Woodland Horizon since then. The business has since expanded to about 40 employees – a far cry from the original two, Martin and his wife, Emma – and it has successfully navigated a pivot from subcontracting for other companies to building up its own brand as a place where, as its delivery trucks promise, “wood is our canvas.”

Martin credits a lot of the company’s recent success to Marlin Sauder, the sales manager who came on board in 2015 to shepherd its marketing and branding efforts. Since then, Martin says they have spent the past few years trying to keep up with demand.

And yes, that includes last year, as well. “2020 was an interesting year,” he said. “Scheduling was a nightmare; things were moving all over the place. But all in all, we actually exceeded our sales budget. We’re just incredibly swamped right now.”

Back when everyone was beginning to understand the full economic impact of the pandemic, Martin recalls thinking that it would be a slow winter for his business. But then the exact opposite happened, and he’s not entirely sure why things turned out that way: “I guess people are staying home and not spending money on vacations,” he mused.

Based on what he has heard from their clients, Sauder agrees. “A lot of people out there… with the way things are going they’re saying, ‘Okay, we’re going to fix it up and make it the way we want it,’” he said. And since they’re not traveling and doing everything else, they’re at home looking at it all day and they’re ready to pull the trigger on that.”

If that’s the case, then it’s a good thing Woodland put in a lot of work building up its brand beforehand. When Sauder, a 17-year veteran of the home improvement retail business, joined the team at Woodland Horizon, he knew the company was looking to move away from subcontracting to deal directly with renovation-minded homeowners. To that end, he focused not just on building up the sales team but also on the marketing that would support their new direction, including the construction of an onsite showroom and the production of printed materials showcasing the company’s past work.

And then there’s social media. Operating on the premise that you reach your customers by going to where those customers are, Woodland Horizon went wide with its online presence, inviting people to follow them on popular sites like Facebook, Pinterest and Instagram while also encouraging prospective clients to check out their five-star reviews on Houzz, a website that connects homeowners with home improvement professionals.

And in a nice bit of marketing savvy, the company doesn’t fill its social media channels with just photos of fabulously appointed kitchens and bathrooms; Sauder’s team also peppers them with meme-worthy quotes that align with the company’s core values (“When you feel like quitting, think about why you started” and “Let your faith be bigger than your fears” being two recent examples).

Result? Martin declines mentioning specific sales numbers, but see “incredibly swamped” above.  While no one could have predicted a pandemic or the impact it would have on consumer habits, having that built-up digital presence already in place helped Woodland Horizon thrive at a time when it had every reason to believe tough days were ahead.

In that same vein of preparing for whatever opportunities the future might bring, Martin has also made it his priority to empower his people. Two years ago, Woodland Horizon started what it calls its Lean Initiative, a business model based on lean management theories that focus on cutting waste while ensuring quality—or as Martin puts it, “looking for things that bug you and fixing them every day.”

A typical workday at the shop starts with a few stretching exercises, followed by team meetings where everyone gets a chance to lead a discussion and express their gratitude to others on the team. Everyone then has 20 minutes to go and find something that bugs them and deal with it: a messy corner, a worn machine component, a broken light, you name it.

Putting that hour of the workday aside towards organizational and developmental skills has paid off, says General Manager Clare Weber, joking that taking the time deal with the little things doesn’t seem to keep more little things from coming along to take their place. But better to deal with the small stuff before they become big things, and he says so far the initiative has been worth it: “Every little thing we can do to move product faster is money in our pockets.”

Martin agrees, adding the results he has seen go beyond dollars and cents. “It results in people being more engaged in what they do. On top of that, you can’t become a better person at work and not take it home. We help our people become better here and grow better as people, and that’s super-exciting, the potential we have to make things better in our communities through the little things we do at work.”

Before anyone starts talking about how we’re giving away the company’s management secrets, in our defense they did it first. Martin is a big proponent of sharing ideas and best practices with others in the industry. Through organizations like the Bluewater Wood Alliance and the Canadian Kitchen Cabinet Association, Martin and his team have taken part in training sessions and plant tours—including ones held at their shop—designed to help everyone who takes part get a little better at running their businesses.

“This industry… we’re not building rockets,” he said. “There are very few secrets in what we do. Not everyone needs to make the same mistakes; we can learn from each other. That’s the big thing I see shifting in the industry, and I’m super happy to see it. There’s no reason to hold everything close to their chests.” Of course, he says, it’s easy to say that in times when there’s enough work to go around: “When we’re all scrambling trying to find enough work, that’s when that philosophy will get tested.”

But he tries not to focus on those thoughts, and instead looks forward to a brighter future—a future where his oldest child, who asked for a CNC router for Christmas this year, might someday want to start a woodworking career of his own. Or one where Martin might get a chance to pay forward the same kindness he was once shown to someone in need of a helping hand.

“You need to look at the bright side of things,” he said. “Life is too short not to.”