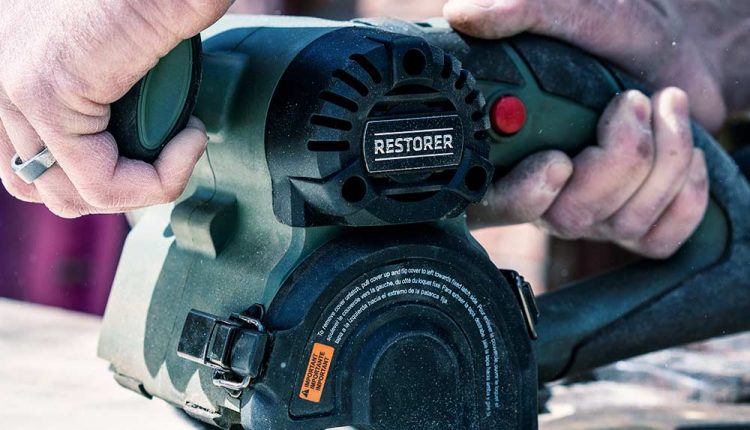 From prototype to patent

With lumber prices in such a wild flux in recent months, interest in reclaimed wood has become a popular trend that makes tools for treating this kind of wood essential.

Robert Kundel Jr., Originally developed the Restorer to deal with rust removal that was one of his family’s company’s largest expenses. Driven to find a solution, Robert searched for an affordable handheld solution, but couldn’t find one, so he took it upon himself to build his own with the help of fellow employee Richard Schley a former tool and die employee of Delphi Packard Electric. Now, the tool is widely used in industries far beyond rust removal.

“The Restorer provides much more than an average sander,” explained Kundel. “It evenly distributes pressure across the tool, proving better control while reducing strain on wrists and hands.”

The Restorer can be used for material removal that typically requires many different hand tools and power tools. This patented handheld or benchtop tool can be used to buff, sand, grind, polish, scrub, or clean any surface. It’s balanced and compact for maneuvering in tight areas and around tricky obstacles.

“You can save money and the environment when you restore old materials rather than buying new and filling the landfill with items that have more heart and history than the store-bought alternative,” explained Kundel.

It can be used on surfaces that are flat or curved, wet or dry. It can also be fitted with any type of roller, from abrasives to wire wheels. The pistol grip allows for one-handed tool control or the front palm grip to work vertically or overhead. Users can also connect a vacuum source to the output port to efficiently clear away debris.

Kundel built his first prototype out of an angle grinder, a power source, a steel wire wheel, and pieces from his wife’s vacuum. In just a few short years, it went from this Frankensteined piece of homemade equipment to being patented and sold in major hardware stores across North America in just seven years.

Considering most people never even make it through the patenting process, this alone is a huge achievement.

“I already had a couple of connections; I had worked with my family’s company’s intellectual property lawyer quite a bit,” he explained. “And my sister worked at a patent attorney’s firm in California and knew the technical side of things. She was able to write the patent application for me.”

For anyone unfamiliar with the process, a successful applicant will typically spend three or more years and up to $14,000 to get the patent. Kundel did it in less than two years and spent only $1,200 to file.

“And I bought my sister an iPad as a thank you,” he laughed.

But it wasn’t all smooth sailing; getting the patent was only about 5% of the process of getting it into stores, even if the feedback they were getting was very positive.

“People kept telling me that they had never seen anything like it, but I was looking for the right fit,” he explained. “After seven years, I signed a reverse brand license agreement with John Cunningham and the licensing team with Stanley Black and Decker under the brand names Porter-Cable and Black+Decker.”

In the fall of 2019, the Restorer was also be launched under the Craftsman brand and came to market in France, Portugal, Spain, Italy, and Greece under other global brand names. All told, his product sells in retailers in 12 different countries, and it ships worldwide. He’s come a long way from his first order of 14,000 units from Lowe’s.

The Importance of Canadian Government Funding

Producing Tools for the Woodworking Industry