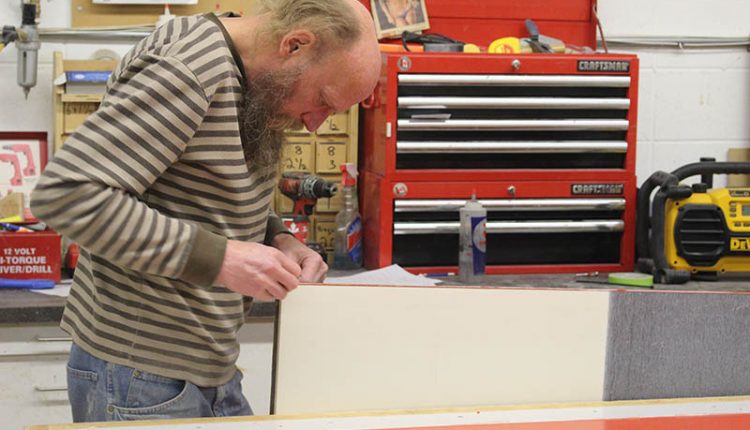 Owner Greg Clark is quite clear about that.

“It is very rare that we do any residential work,” says Clark. “It is not a market I have any interest in. Just commercial that is only premium grade.”

The 10-man shop has fluctuated between four and 12 since Clark bought 100 percent of the shares in the business in 2010. “I bought into some shares in 2009,” he says, noting that he has no partners or shareholders.

As a commercial project specialist, Western Millcraft only deals with contractors, according to Clark, with two of the staff designated as in-house installers to ensure quality from the shop is transferred to the field. Another serves as the in-house Autocad drafting expert.

The company started in 1990 and operated as a paper company until 2004 when it transitioned to millwork. Western Millcraft also became a member the Architectural Woodwork Manufacturers Association of Canada in 2016.

Clark calls himself a “very hands-on” owner that wears many hats. “I don’t build anything, but I’m very involved and know everything that goes on — whether they think I do or not,” he says. “That’s what you have to be in a small to medium sales business.”

Having a solid woodworking background allows Clark to lead his craftsmen both inside the shop and outside with clients. “As a registered apprentice program student, I started working for RBK Millwork in 1998 (also in Edmonton).” He completed his apprenticeship through Randy Kuzyk, president at RBK, Clark explains. “I came here to Western Millcraft in 2004 with a registered journeyman ticket. I worked on the bench for two years, then made my way up to this chair. I haven’t left this chair. I kept the company going and made it bigger, better and stronger.” 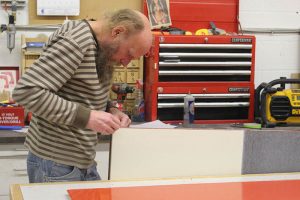 “A CNC machine is on my agenda, but I don’t have the real estate, the knowledge or the infrastructure at this point.” Returning the favour once offered at RBK, Western Millcraft has also had some registered apprentices and produced a few journeymen. Clark finds skilled tradespeople through the industry. “People come looking for work and I see if they are a good fit. We don’t have a revolving door. I only have journeymen cabinet makers and millwork registered apprentices. I hire no labourers of any kind.”

Before Clark acquired the Western Millcraft, “the October 2008 crash affected us all and 2009 was a very slow year. Allen Cusworth, the owner, had a stroke and I felt obligated to keep it going for a while.

“I needed something to do and all I know is cabinetmaking. It was an easy transition. When I was an apprentice I wasn’t sure millwork shops could make any money. But Allen showed me they could. I have done OK.

“I already had contacts in the industry and my supply chain already set up. I had my machinery in place. That was a lot of the cost. All I had to do was to follow through and keep on going. I had things in place.

“So it wasn’t a true startup for me. I just grabbed the torch and kept on moving with it. Clients have come and gone but I’ve made some new friends along the way. I find business very fascinating and very interesting. It’s a very fast paced thing. The risk is great. The reward is too.”

Western Millcraft supplies and installs all of its own product. The company is capable of doing work in-house with Corian and solid surfaces, as well as laminates. “We subcontract the finishing, sheet metal, stain and lacquer. I don’t work too much with high gloss unless the architects spec it.”

Although Clark doesn’t typically deal directly with architects, they are in some project meetings and work with his company before the contractor on occasion. 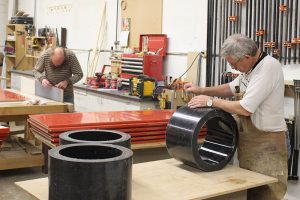 Experience has taught Clark to be careful about who he does business with, relying largely on developing relationships and trust. “I will do a job with someone and two or three years later he will call me and say, ‘I need this.’

“Another reason is capability. You don’t want to work with too many people and spread yourself too thin.

His work typically comes from open and closed tenders, companies Clark says he can focus on. “My door is always locked unless I go to the mailbox. I accept no work from the front door at all from anyone for any reason.”

Western Millcraft projects include for the Good Samaritan Society, the Alberta Association of Engineers and McDonald’s restaurants. Reception desks and kiosks are popular projects, says Clark. The company works with local contractors such as PCL Construction, Clark Builders and Fillmore Construction.

“One of my favourite jobs is one we did for Clark Builders in 2010 for MacEwen University in Edmonton where we built a big office on top of a parkade, including a cafe. We also built display walls and feature walls and curved things, bulkheads and the board room.”

Just how big could Western Millcraft become? Clark answers, “I have no interest going outside Alberta. Since the crash I have stayed away from the Calgary market completely. The biggest guys in town have told me they wish they had stayed small.

“The bigger it gets, the hungrier it gets and you have to feed it. I don’t want to be the biggest but I want to get bigger. I have a dream of commercial real estate and owning my own building. But I have to pace myself.” Clark is happy that everything in the shop is paid for.

However, Western Millcraft is still aggressive in its market and prepared to defend its hard-earned turf. “It’s tough to beat me when I want something,” says Clark. “I keep my territory.”

Undermount slide supports up to 60-in. wide drawers