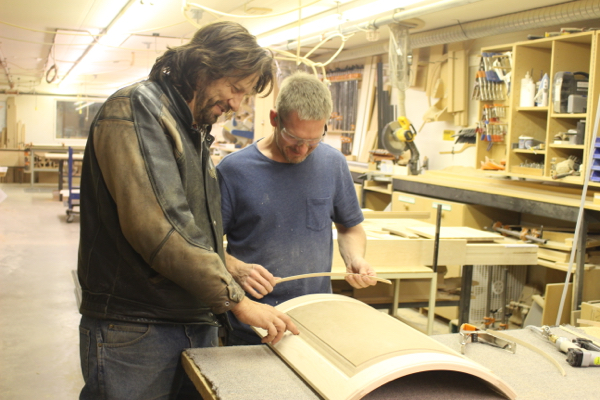 Old world technical ingenuity at home on the prairie

The land in southern Manitoba may be flat as a billiard table, but the ambition here is a mountainous as the Rockies.

Over generations, Germans and other immigrants have exercised their wood craft skills to create scores of successful businesses, large and small.

Here in Winkler, Man., 20 km from the U.S. border at North Dakota, there is one large business helping smaller shops around the continent. Elias Woodwork produces cabinet doors, as well as handcrafted solid wood furniture, solid wood dovetail drawer boxes, moldings of all categories and designs, and many different accessories.

According to Ralph Fehr, majority owner and operations manager at Elias Woodwork, “We tend to be a favourite choice for smaller companies for their production and customizing efforts.

“Say a small cabinet maker wants to build something and they have a contract that is too big for them, but they would love to get a piece of it. They find they can sub out a bunch of work to us to augment what they do.”

Fehr refers to this “mass customization” as the core of his business at the Winkler plant and sister operation in nearby Morden, Man.

“The manufacturing of the pieces is high labour, low margin work for a lot of companies,” he says. “The money is in selling the product and installing it, doing the onsite trim stuff. They let us do the manufacturing and they become sales arms for us. That is the best relationship we have, those customers.”

Originally, the company was one of those small businesses that it currently serves. Peter Elias started Elias Woodwork in a small garage on a farmyard to provide cabinet doors to a few cabinet shops within Southern Manitoba. Over 20 years ago, John Fehr and his brother Ralph Fehr purchased the little company, as they recognized a great potential in the cabinet door manufacturing industry.

Upon acquiring the company in 1983, it was moved from the garage to a slightly larger building located within the town of Winkler. They remained there until 1987, when they had completed construction of the first building at the current location. At the time, the new 5,900 square foot building seemed enormous. Starting in 1993, they began another construction phase that lasted six years. Upon completion, they came to the realization that you just never seem to have enough building space. Elias Woodwork presently occupies over 285,000 square feet, including a 28,000 square foot painting area.

In 2006, Ralph Fehr became the owner of Elias Woodwork, along with several employees as minority shareholders. “We were getting all kinds of offers from multinational companies to buy this place,” says Fehr. Personal family circumstances at the time led him to keep Elias Woodwork and acquire his brother’s shares, while the company’s purchasing manager, maintenance manager, business manager, marketing manager and human resources manager also bought stakes.

“My brother John stayed on working and he still does – it is a good relationship,” says Fehr. “I am the engineer and he is the artistic designer.” Fehr explains that he is a structural engineer by education, with a major in dynamic structures.

His first job out of university was building highway grain trailers and flat deck trailers for a company in Winkler. The same company now leases space from Elias Woodwork to build aluminum versions of steel trailers built in a big factory elsewhere in Winker. “The smaller part of their operation is in the back of my building in the Morden plant,” says Fehr. “They have a year to get out because we need the space. We are growing as fast as we can possibly keep up with.”

The pace of growth is important to the company as it, like many other businesses, fend off foreign competition. With this growth, Fehr explains, his operations are becoming more automated.

“We have to make North American competitive with the low labour rates of the rest of the world,” he says. “There are two ways we keep China off of our radar. One is by implementing automation because automation is still less expensive than even the cheapest human labour on the planet. The other is that we have very fast freight connections to North American destinations everywhere compared to China.”

Technological prowess and craftsmanship is a huge driver of success at Elias Woodwork on a number of levels, in part to the massive influx of craftsmen from Europe.

“We have about 1,500 to 2,000 families from Germany who have moved into the area in the last ten years or so,” says Fehr. “A real estate agent did a travelogue in Germany and got the first few families here, then it’s just word of mouth after that. We have acreage here, we’ve got room and they are still coming.”

Fehr estimates that a third of his employees don’t speak English properly. “These guys are highly educated through the German Fachhochschule system (where employment is part of academic accreditation), more than what we do for apprentices. I have a guy who has a master’s degree in stair building. You can’t get that here. He will tell you things about the molecular and cell structure level of wood, how it behaves with different conditions.

“They are the ones who taught us how to laminate big timber so it wouldn’t split apart. Like when you want to make a 4 x 4 foot post where it tends to want to split down the centre on the glue seam.

“Kiln dried wood is fairly stable but when you have a big block like that and it dries out a little bit, the core has no place to go when it gets smaller so you need an extremely strong glue joint. What they taught us was to wet both surfaces with water and then use your PDA glue to put on top of it. The moisture wicks into the wood because the wood has been dried beyond its normal state in the kiln. It has a vacuum and it pulls the glue into the wood with it. We haven’t had a split since we have done that.”

Fehr says he doesn’t “mind giving the secret out to other people” because of the havoc splitting wood causes throughout the industry.

At the Morden plant, in-house engineering expertise has permitted the company to invest in designing its own automated guided vehicles (AGVs) that run on tracks throughout the facility, bringing just-in-time materials to each workstation. If a part for a machine or AGV is not commercially available, or costs too much commission a metal mold, it also has a 3D printer in its laboratory to make a custom version.

This expertise allows Elias Woodwork to create custom automated machinery for specific challenges. An automated system for drawer box sides incorporates a feed-through plunge router, has been developed with native company talent. Other developments, such as laminating five-piece doors with vinyl materials and producing curved moldings with high gloss acrylics, are also part of the company’s manufacturing expertise.

While the company is leading edge, it maintains current assets such as some older Italian CNC machines that still produce high-quality components. “The biggest problem with these CNC routers is that they go obsolete so fast that we can’t depreciate them quickly enough,” says Fehr. He finds it frustrating that they are not supported five years after being purchased. The engineer in him sees a still perfectly good, robust machine that he’d like to keep in service. When some circuit boards ceased functioning, Fehr didn’t give up and turned to DigiKey, a giant electronics supplier across the border in Thief River Falls, Minn. “We are trying to get them to reverse engineer some of the cards that are no longer made for the servo drives.”

With this kind of ingenuity, it is easy to see why the company has been named on Manitoba’s 50 Fastest Growing Companies list several times – and that more honours lie ahead.