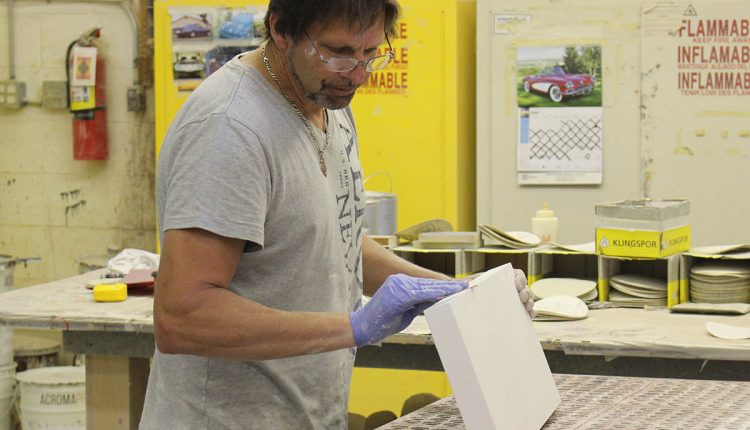 The greeting couldn’t be warmer this sunny summer day. A bearded bear of a Russian welcomes me to the showroom of Barlow Cabinetworks in south Barrie, Ont., and the conversation flows.

With a twinkle in his eye, Igor Slabkovski, co-owner of the business, relays a familiar tale of learning his cabinet making skills at trade school in Leningrad, Soviet Union. He made his way to Canada via the Middle East and Israel, and after working with a shop for a time in Toronto, Ont., ended up in Barrie.

In what is now Russia and St. Petersburg, “I learned how to become a joiner,” Slabkovski says. He reminds me of the resourcefulness Eastern Bloc inhabitants brought with them to make good in the West, just like a Pole I once worked with who could repair any piece of equipment. Parts, and other things, were scarce under communism.

His father was a jazz musician in the old country, a form of music frowned upon by the authorities. Slabkovski keeps up the musical tradition by playing the drums on weekends for his own pleasure, along with friends who share the passion for performing together.

A little while later after a shop tour, I meet Dylan Barlow, the other co-owner. Barlow grew up sweeping floor of his Dad’s wood shop when the business was just getting going in nearby Churchill, Ont. Before John Barlow, the father, retired for good in 2012, Slabkovski purchased a 50 percent stake in Barlow Cabinetworks in 2007. However, Dylan had left Barrie in 2005 to work at another cabinet maker for a couple of years, then started his own 1,800 square foot shop in Toronto. After a few years, it was Dylan that succeeded his father in the family business to become Slabkovski’s partner in 2012. 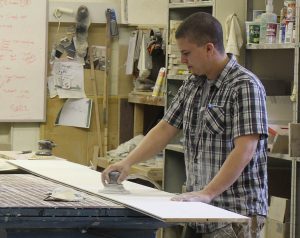 “Every summer growing up I loved working in the wood shop with my Dad,” says Barlow.

The combined experience of Slabkovski and Barlow translate into a booming, high-end cabinet shop with a territory that stretches north to Sudbury, Ont., east to Quebec and south to the U.S. border. “We have done work in Prince Edward Country four hours away, but any farther is not logistically ideal for us,” says Barlow.

Local developers in Barrie don’t factor in as customers for the company’s quality craftsmanship, according to Slabkovski. “We’d need 100 employees and we are not a production shop.”

The company has a landlord, which has made dust collection a manual process at each machine. “Outside dust collection is not permitted by agreement with the owner of the building,” says Barlow. While not ruling out buying their own wood shop, the set-up cost and downtime have made them leery of taking that leap.

Besides the two owners who operate as salesmen, quotation specialists, designers and production coordinators, there are seven employees that keep the custom shop humming and installations on schedule. Recruiting over the years has extended from taking in a high school co-op student to hiring a Conestoga College graduate. The latter had great knowledge, but no experience, as Slabkovski put it, but stayed for five years.

“Every cabinet maker is different — I’m doing it one way, the next guy does it completely differently. Sometimes it’s nice when a young guy comes into the shop — they don’t know bad things yet.” 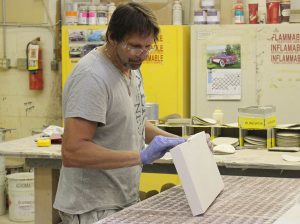 When Barlow or Slabkovski enter into a discussion with a potential customer, they want to get into a “premium conversation,” says Barlow. “That won’t work if they are looking for an Ikea-priced kitchen.”

However, clients that arrive through word-of-mouth helps to shorten buying discussions.

“They’ve seen our work and ballpark of the budget. Customers are almost ready to buy at that point so that a sales pitch is hardly necessary,” says Barlow.

Residential sales make up close to 75 percent of the business while commercial sales, like the renovation of the Drake Hotel and stores in Toronto, make up the balance. The company has developed relationships with designers over the years that help generate sales and has a website that informs prospective customers. The website states upfront that “If you’re already working with a designer or architect, we’re happy to work with them as well. We then guide you step-by-step as you select your materials, finishes and hardware.”

Several CAD software packages installed at the Barrie shop can help design staff with everything from sketches and 3D designs to architectural drawings and lifelike renderings. The software helps customers visualize what their project will look like finished in their own homes so that any design changes can be discussed prior to cutting panels or routing hardwood.

The design process “can take way longer than the construction or building of a project,” notes Slabkovski. The back and forth with a client, reviewing drawings, looking at the home in detail, is very important to the process. “This way we give the customer what they really, really want.” Choosing materials for the project and developing paint colours also take time, he adds.

Design inspiration for Barlow Cabinetworks creations come from many sources.
“Every project is different,” says Slabkovski. “Tastes are always changing. It’s the 21st century — when you are out of ideas — check the internet (laughs).

“People have been making tables and chairs for thousands of years. So we’re not doing anything new — it’s just that not everybody can do it.”

Besides a standard line up of table saws, rip saws, band saws, sanders and routers, Barlow Cabinetworks includes a CNC machine that optimizes cut lists and handles complex tasks. “Not everything can be done with jigs and a router,” says Slabkovski. 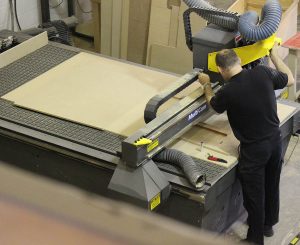 “The shop is different now than it was 10 or 20 years ago. Drop by drop we have improved with new machines, more precision and more experience.”
More and more cabinet making businesses are investing in countertop production equipment, but that is a non-starter for Slabkovski. “Stone is not my business — shoemakers should make shoes,” he says.

When it comes to installation, their site says “We treat installation as an art not a science, because our experience has shown us walls and floors are never perfectly straight.”

The premium approach in the marketplace appears to be working. Slabkovski recalls starting a Barlow Cabinetworks when it was 2,200 square feet, then added another 800 square feet for a spray booth, followed by an opportunity to move to 5,000 square feet. “We’re now 10,000 square feet,” he says, channeling Chekov from Star Trek, “because it’s all about ‘Space, the Final Frontier.’”