When your shop is 33 kilometres northwest of Edmonton down an unpaved side road, a visitor begins to wonder if they have made all of the correct turns along the way. Rest assured on this crisp fall morning, Palladium Products Ltd. in Sturgeon County, Alta., finally comes into view and the iPhone GPS can safely be tucked away.

Palladium is the only manufacturer in Alberta that can produce laser- and PUR-edged doors and decor panels, while maintaining the full capability to provide kitchen cabinetry, closet organizers and store fixtures. According to Borys Hayduk, president, Palladium Products, the company is now a great resource for high gloss acrylic, textured and matte doors and panels.

This capability was not always the case, says Hayduk, who bought into the company 10 years ago. “Before, the company did cut-to-size jobs and supplied components only. In 2007 when I came, I converted the storage into an assembly operation.” 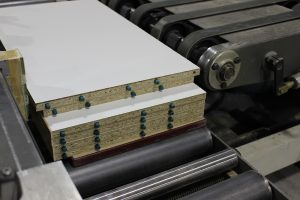 Then known as RTA Millworks, the company provided full finished cabinetry for large scale commercial and residential projects, include camp provisioning for Suncor, Britco and Noralta Lodge, as well as various college school projects across Canada. Hayduk was vice president of manufacturing at RTA before assuming the position of president in 2014. “At the time I started at RTA, 90 percent of the business became kitchen cabinet assembly and office furniture,” says Hayduk.

The path that Hayduk has taken to the Edmonton area and into the woodworking business might described as going through a side door. Born in the former Soviet Union, he grew up in Rivne (sometimes Rovno), Ukraine, where he also attended National University to study mechanical engineering. Besides English, he is fluent in Russian and Ukrainian with some proficiency in Polish. His Polish, Hayduk says, was not learned by living relatively close to the border with Poland, but from dealing with Poles during eight years in the Toronto area.

From 2002 to 2007, Hayduk was machine department manager at Woodlore International of Brampton, Ont., a supplier to office furniture giant Steelcase. This background explains his knowledge of, and confidence around, woodworking machinery. “If you understand the technology and the processes, you can change things to work better,” Hayduk says.

When RTA became Palladium in 2015, Hayduk knew that he wanted to continue the company’s commitment to quality and automation. That is when the company purchased an edgeband machine which had new technology for it to offer customers. “It’s unique and can do all three applications — laser (NIR IR), PUR, and EVA glue. Most machines would be laser or retrofit, or PUR/EVA machines,” he says.

Hayduk says, “for example, if you would use this PUR glue on your furniture and that furniture sits on the bare floor where it is cleaned and mopped regularly — even when the furniture gets wet — it will not absorb the water.

“You would also use it for your kitchen cabinets — commercial or residential — where you have your upper cabinets above a stove or kettle and when the steam rises, usually the edge tape from the bottom of the cabinet falls off. If it is glued with PUR it will not.” On the commercial side, medical is a target market for PUR technology. “Hospitals either spec laser edge if you do flat doors or PUR because they don’t want any germs going into the edges,” he says.

The technology also works with a variety of substrates. “PUR can be used when you have MDF core and acrylic on top of the glue. Afterwards it will not split or delaminate if the product is used and abused,” Hayduk says. As well as MDF, Palladium mostly uses particle board, as well as pre-finished birch for schools, with supply coming from the U.S. and Canada.

The design trend toward high gloss and matte finishes has many Palladium customers asking it to make samples for their showrooms. Certainly the highly automated, flexible edgeband machine has opened up new markets in residential and commercial. The company also has other automated systems, such as its CNC-gantry flexible automatic through-feed boring machine with an integrated dowel inserting system.

Palladium now excels in applications for residential luxury condo towers, office and commercial buildings. The company’s sales territory of builders and other cabinet manufacturers is primarily western Canada — Alberta, Saskatchewan and British Columbia. Since it made the transition to semi-automatic production, the shop has gone down to seven employees from 18. “A similar shop here in Alberta would have 40 to 50 employees,” he says. Besides operator control, much of the labour in the shop is for material handling and inventory control, leading Hayduk to constantly explore his manufacturing options. “I am still thinking about putting in more robots — that would only require two people on the floor.”

Because of Palladium’s location, it is very hard to find employees, so despite those cast aside due to the downturn in the oil market, Hayduk has found skills are not transferrable. “If I place an ad in the newspaper, I would get 200 applications. But even with no previous experience, the expectation is still $20 per hour, not $13 — that’s the problem.

“And those that come from similar industries have no experience with these types of machines. In the Toronto area, there are so many companies that would have these and people who know how to run them. In our case, it’s mostly farmers.” Hayduk has observed different business cycles during his time with Palladium and RTA, and has used his automation strategy to remain profitable. “The past 10 years we went from residential to more commercial, right up to 2010. From 2010 to 2014 we went to more of a mix, while now 90 percent would be considered residential, mostly because of the oil price.”

While sales are down 40 percent over the last three years due to the economy, Hayduk does have an expectation of a business boost from the nearby Fort MacMurray, Alta., rebuild as the town recovers from the devastating wildfires of 2016.