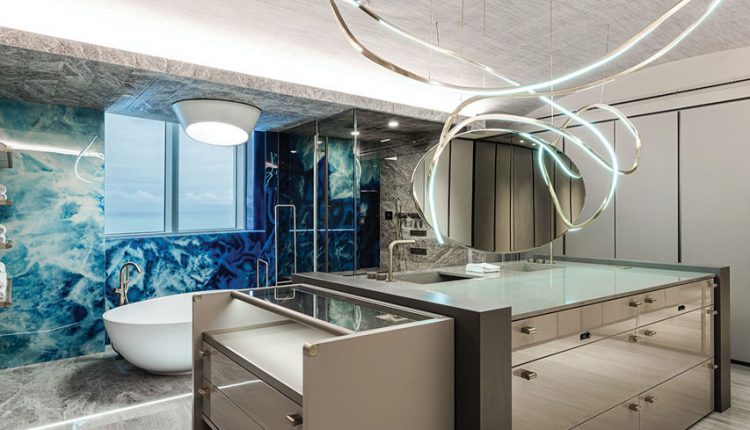 NKBA’s newly released 2023 Design Trends report revealed several new and upcoming trends as well as highlighted a number of others that continue to gain traction. The annual report, which surveyed over 600 members of the kitchen and bath industry, identifies the space, color, materials, products and technology trends that will dominate the kitchen and bath industry during the next two to three years.

The trend that only continues to gain ground is the expansion of both kitchen and bath spaces. Nearly 40 per cent of designers said their kitchen projects are larger, more involved this year compared with 2021, while about one-third said the same for their bath projects.

The majority of designers noted that to add additional storage and functionality, they are knocking down walls or taking over adjoining rooms to add more square footage. The increased space for kitchens enables designers to add walk-in or built-in pantries for expanded storage, larger (or two) islands and more appliances like a second dishwasher or column refrigerator and freezer.

Meanwhile, for baths the extended space allows larger showers for two or more people (at the expense of the tub), the addition of a closet, dressing room or sitting area. In addition, the expanded space is also giving rise to more aging in place features such as shower seats (79 per cent), zero clearance (66 per cent) and grab bars (65 per cent).

“The majority of designers for both kitchen and bath said they consider a manufacturer’s sustainability practices “at times” when making a product recommendation.”

For both kitchen and baths, the trend towards sustainability and the environment will only grow stronger. The majority of designers for both kitchen and bath said they consider a manufacturer’s sustainability practices “at times” when making a product recommendation. The move toward embracing the environment also is seen by the continued movement toward opening up to the outdoors for both kitchens and baths. This means larger windows with fewer panes and glass doors that open to an outside patio, deck or garden.

Color and bold accents are gaining ground in both the kitchen and bath continues. Specific to kitchens is the rise of darker, richer colors with green (45 percent) and blue (37 per cent) topping the list. White/off-white remain the most popular neutral color. Meanwhile, brushed and matte finishes eclipse polished for fixtures and. “Warmer, natural colors, less gray and white,” said one designer in the survey. “Or [we’ll see] strong, dramatic colors mixed with light natural woods to warm it up.”

For baths, the spa-like design trend can be seen in the rise of using blues (42 per cent) and greens (37 per cent) to give a sense of calmness, serenity. To add drama and a hint of glamor, there’s also the addition of metallics with little to no shine, as matte or brushed finishes dominate.

Technology as a Functional Benefit

When it comes to technology, clients increasingly want to make their life easier, more efficient. In the kitchen, this translates to steam cooking/air frying features integrated into ovens and a mobile app to control appliances. In addition, designers said their clients are also excited about touchless faucets and voice- or motion-controlled lighting.

In the primary bath, respondents said their clients are looking for smart controls for heated floors, showers and lighting. They also want technology to help them conserve water and alert them to leaks/issues.

Millennials on the Rise.

The survey showed that designers’ client pool continues to be mostly older, mainly Gen X and Boomers. However, there is a growing Millennial client base that is gaining momentum. In fact, 17 per cent of respondents said they are designing more for this group than any other, nearly double what it was in 2020.

Interfor to Cut Production in Q4