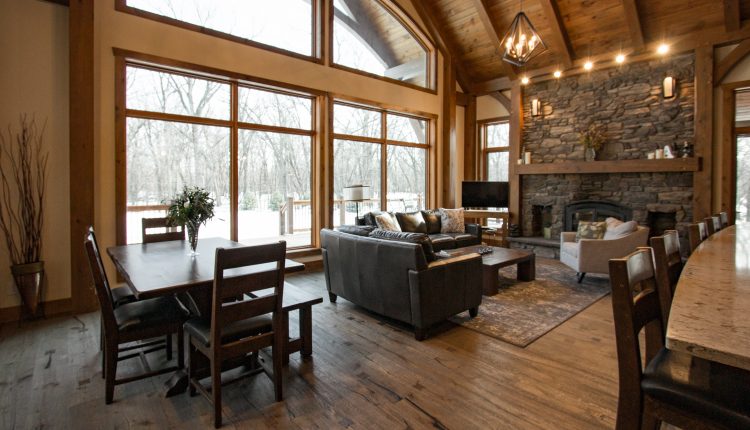 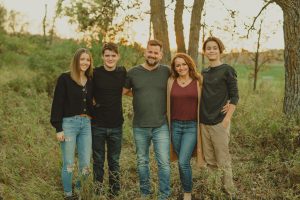 It was on a drive from Manitoba to Ontario in 2008 that Blayne Wyton came up with the vision for his company.

“We were driving, the kids were asleep in the back, and I just kept seeing these old buildings along the highway,” said Wyton. “I spent a few hours thinking about it: creating handcrafted furniture in a country style from reclaimed wood.”

When he got back home, he placed an ad in the local newspaper, looking for someone looking to rip down an old barn.

“I worked and cleaned the whole thing up at no charge,” he explained. “It took me a month to clean up all the wood.” 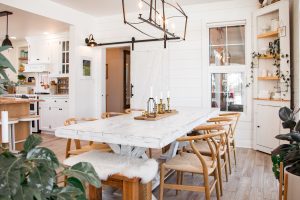 His first project was a dining room table that his landlord bought. He then spent the next few years designing and building up a catalogue. Now, he has a team of seven and a full shop and showroom in Morden, Manitoba. They make everything from tables, to mantels, to decor in a variety of finishes and textures.

Wyton now outsources the dismantling of old barns, wood structures, and homesteads to an additional team of four to six people. The wood comes from across Canada, mainly in the Southern Manitoba area. Typically, they salvage old-growth Douglas Fir from the early to mid-1900s. Reclaimed lumber like this comes with twelve times less embodied carbon than new wood. 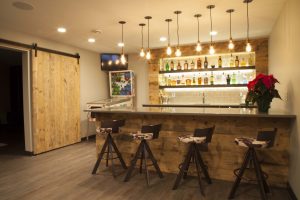 “We believe that recycling is the way forward to save our existing forests and ecology,” said Wyton. “In August 2010, we actually received an award for our work from the Morden Stanley Thompson Winkler Community-Led Emissions Reduction Program for ‘An outstanding contribution to green initiatives and sustainable practices.’”

Breaking down a barn is a big job. Even with an experienced team like Wyton’s, it can take 200-300 hours just to bring it down. Once the structure has been dismantled, it is taken back to the shop and sorted by type and dimensions before being kiln-dried to stabilize the moisture content. This process takes another two weeks. Then there’s the matter of organizing the pieces by pieces, length, and width, stacking a restocking to ensure proper airflow. It’s a labour-intensive process to get the wood ready for use. 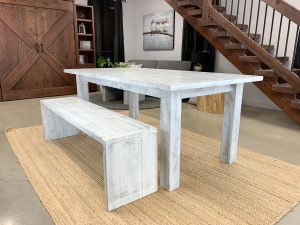 “It’s so grassroots; it’s so Canadian. Back in the day, Eaton’s catalogue sold schools, barns, churches – they were made in Western Canada and shipped all over the country along the railroad,” said Wyton. “There are tons of Eaton’s barns from 1910 to 1930 that are still across southern Ontario. It’s so great to be able to salvage this wood and make something new out of it.”

Each of their solid wood pieces is built with its own unique character and patina. Most pieces include knots, burrs, nail holes, and other features that tell the story and history of the years and seasons throughout the wood. Their kitchen and bar countertops have a water-based stain and colour of the customer’s choice applied, then five coats of food-safe water-based hardwood floor finish applied to the surface. 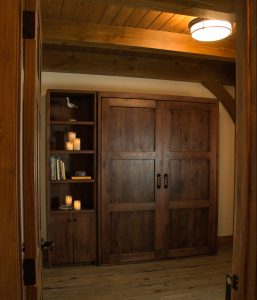 They also still make custom orders beyond their catalogue.

“People often want something made out of their old barn,” he explained. “It’s something sentimental that they can keep. Pulling down a barn or a homestead – that’s a piece of history.”

Working with old wood wasn’t something new to Wyton when he started Prairie Barnwood. He grew up in his parents’ antique store and has refurbished and refinished antique furniture since 1999. Prairie Barnwood is a way to preserve culture and the environment.