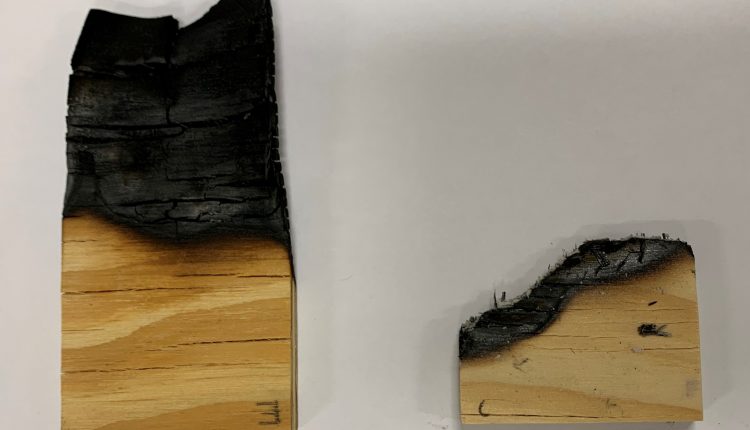 The researchers presented their results on a new type of coating that could limit the flammability of wood used in construction, potentially providing more time to escape fires and curbing their spread at the spring meeting of the American Chemical Society (ACS).

“This type of treatment, which could be deposited via dipping, spraying, or pressure treatment, could make homes much safer,” says Kolibaba. “The coating could reduce flame spread and smoke production, which could limit damage and give people more time to evacuate.”

Unlike most current fire retardant treatments, its ingredients are environmentally benign, and it might also cost less, notes Jaime Grunlan, Ph.D., the project’s principal investigator.

Kolibaba carried out the research as a graduate student and postdoc in Grunlan’s lab at Texas A&M University, building on polyelectrolyte coating technology invented by the group in 2009 and later extended by other researchers. Most of these coatings are formed by dipping items in a solution containing one polymer with lots of positive charges, followed by a dip in another solution containing a polymer with lots of negative charges, and then repeating these steps to reach the desired thickness. The opposing charges draw the polyelectrolyte molecules in the alternating layers into complexes on the item’s surface, forming a coating that can extinguish a flame.

Kolibaba wanted to extend this treatment to wood, but the multistep process wasn’t feasible for manufacturers because wood takes too long to soak up these chemicals. He adapted another Grunlan technique, thereby cutting the number of steps down to two: one dip to coat the wood, followed by a dip in a different solution to cure the coating by changing the pH. But that second solution kept turning into a sticky mess, so the streamlined process wasn’t convenient for industrial or consumer applications.

Kolibaba overcame that problem with a procedure that he says would be easy for industry or consumers to adopt. He dipped plywood in an aqueous solution containing the positively charged polymer polyethyleneimine (PEI), the monomer hydroxyethyl methacrylate phosphate (HMP), and a photoinitiator known as TPO. Instead of dipping the wood in a second solution to cure, he exposed it to UV light for a few minutes. That caused TPO to turn the HMP into a negatively charged polymer, forming a polyelectrolyte complex with PEI. The resulting coating was transparent and only a few micrometers thick, so it didn’t change the wood’s appearance and slightly added to its weight.

In lab flame tests, the treated wood lowered the amount of heat released during burning and quickly formed a surface layer of char that protected the underlying wood — features that could limit fire damage and spread.

This one is covalently bonded, unlike the team’s prior coatings, which are held together by ionic bonds. So Grunlan expects it to be water-resistant, durable, and possibly water-repellent and antifungal. Industrial users could coat construction materials, such as wooden studs and other framings, or oriented strand boards.

The Power of Texture in Closets