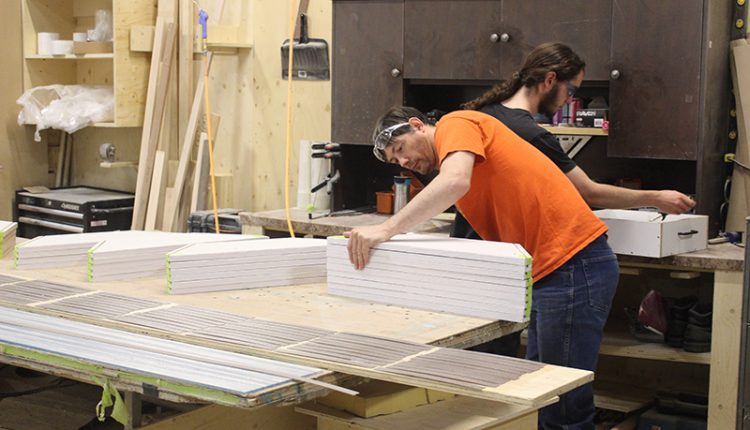 Next time you tuck into a stack of pancakes at an IHOP restaurant in Alberta, chances are you’re sitting in a booth created by a company with a 60-year-plus legacy.

Ryan Neumann, owner of Onsite Group of Companies in Edmonton, Alta., is part of a family tradition that has combined the manufacturing expertise of upholstery and millwork.

Besides the commercial and restaurant booth and furniture upholstery business, Onsite supplies, manufactures and refinishes tables, chairs and custom furniture. It also has a full-service millwork shop that builds custom architectural woodwork for a variety of applications.

At Onsite, according to Neumann, the company’s capabilities are the embodiment of synergy. “The two are very complimentary to each other — having the upholstery allows us to compete on price so we don’t have to put the markups on the sub-trades.”

In the industry, he notes, upholstery costs to a restaurant is 20 percent of the job. Because Onsite doesn’t require this markup, it allows the company to compete stronger in certain markets, which has fueled a lot of growth for the company. Neumann’s Onsite origin story starts with his Mom and Dad, who owned Apex Upholstery where he worked with for nine years while his entrepreneurial spirit grew. 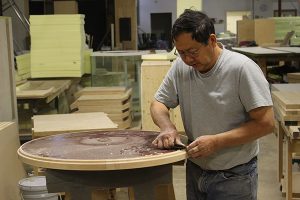 “We parted ways and I started Onsite at the end of 2009,” Neumann says. Over time, his service-oriented company began manufacturing restaurant interiors at the request of customers. By year four, Onsite and Apex started to compete as their markets overlapped.

“Our pricing models were different for the most part at Onsite — who began to overshadow Apex in many ways. It put me in a position to offer a buyout to create a win-win situation.”

Before the merger, the two companies worked together collaboratively while Neumann’s father John collected his thoughts. “In many ways, Apex was Dad. It wasn’t just an asset and it was hard for him to separate mentally from the business.” Paperwork was done up in 2015 for the merger and finally ink hit the paper in the first quarter of 2016.

“Since then, it’s been really interesting,” says Neumann, “because there is no butting of heads and profits have climbed for both Onsite and Apex. Everybody is pulling on the same rope.” Gradually, the Onsite facility will focus entirely on millwork, and Apex will carry its own brand at another site. Through the millwork and the upholstery capabilities, Neumann says, “the culture of ‘if I can sell you your millwork, and I can sell you your upholstery, all in one sales call, maybe I can sell you some tables and table bases.’” 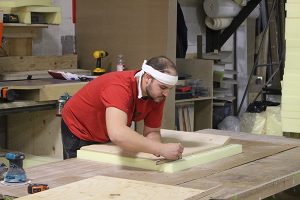 Onsite uses distributors for chairs and stools. “And maybe,” he adds, “we can do the front of your (establishment’s) house — not saying that we do construction — but maybe we can tie all of these things to work well together.”

According to Neumann, millwork is typically a lower margin industry. “Being able to sell more volume to the same customer increases the margins a little bit.” When Neumann started the Onsite millwork shop, revenue was zero, he says. “By the end of third year it was doing $1.5 million and by the year-end of 2015 it was doing about $2.3 million — while Apex was doing $1.2 million. In 2016, combined we’ll be pushing $5.5 million.”

Neumann uses the business learning curve of working with IHOP restaurants in Alberta as an example. “We did a job with them — and they’ve changed out contractors on every single job and the only thing they’ve kept constant is us. We’ve worked our tail off to keep and maintain the business.” 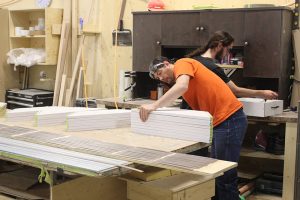 The company’s evolution into a full service restaurant business has meant that IHOP would now have a hard time finding someone else who can do what Onsite does. “You build trust,” says Neumann. He cautions that “on the flip side, if something does go sideways, or a timeline needs to get shortened, they only have to phone one person.”

Onsite employs 42 full-time staff and Neumann’s father “still works here and puts in full days and loves it,” says Neumann. Armed with a Project Management Certificate (PMC), he relies on his senior estimators and project managers to get the job done, knowing he can’t do everything.

“I’m 37 now and I don’t know it all. I am a technician from the upholstery side and learned how to be a manager, but I think my strength is in entrepreneurship — and I don’t want to do it all.” Staffing certainly has had its problems for the company with the “transient crowd,” as Neumann puts it. 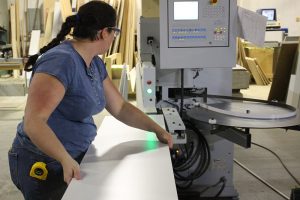 In one example he uses, it could be the truck driver who came in as a helper and suddenly says ‘oh, I got my old job back.’ Over the years, Onsite has found many qualified foreign workers that try to work within the company’s system.

The latest wave has been eastern Europeans who have a lot of upholstery and millwork skills along with the work ethic. “In the last 15 years, especially in my world, there has been a lot of Filipinos come through but they have slowed down.

“In every trade you get your riff-raff and you get your top performers, so as an owner you have got to make sure your turnover is extremely low. You have to work with a low selling price, lower margins and make sure everybody’s happy in the back.” 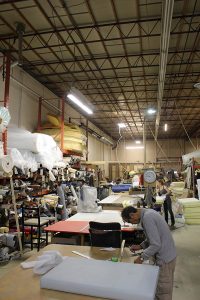 The company tries to hire as many Canadians as it possibly can “because I’m a strong believer in that,” says Neumann, “but it’s sometimes difficult to do that when they come in and start demanding $35 an hour. “I’m sorry, I can’t pay that, it doesn’t work for the business model.”

Neumann is sometimes frustrated by their mentality and sense of entitlement. “If they are sitting on EI for $16 an hour and I’ll make an offer for $22, they basically say ‘are you going to pay me $6 an hour?’ C’mon, it’s a job and it’s more than you’re making and it’s what I can afford.”

Overall, Neumann feels that Onsite is very strong at what it does and that there’s enough business out there for everybody.

“We’re not a big guy doing $18 million a year, but because we’re divided into a couple of different industries, it allows us to not have to fight for everything on the market and we can work with millwork competitors in a collaborative way. We feel we have great relationships with a lot of the other millwork shops to supply the upholstery on jobs that we don’t compete with, or on jobs where maybe there’s some overlap.”

Onsite tries to “build fair, morally correct relationships so they carry our numbers and we supply drawings that they wouldn’t get from other upholstery shops,” Neumann says.

“We always try to take the approach that ‘if you have any shortfalls on your restaurant or your project, we’re cabinet makers, too. We help fill in the gaps.” 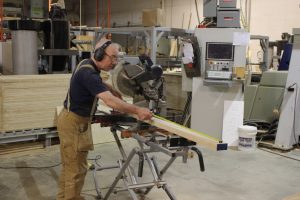 The company wants to have a good working relationships since there is a mutual source of revenue with partners. Neumann estimates that up to 80 percent of the business comes from the hospitality industry and the rest is miscellaneous millwork from projects such as dental, dermatology and medical clinics.

Neumann comes back to the challenges of finding, or developing, quality staff. He laments that the local college in Edmonton, NAIT, produces 600 welders per year but only 20 or 30 cabinet makers.

To compensate, Onsite values self-improvement and encourages employees to finish their journeyman ticket or to take production management certification programs.

Neumann agrees with Steve Jobs, the late Apple co-founder, who said: “it doesn’t make sense to hire people and then tell them what to do; we hire smart people so they can tell us what to do.”

Investigating sexual harassment in the workplace