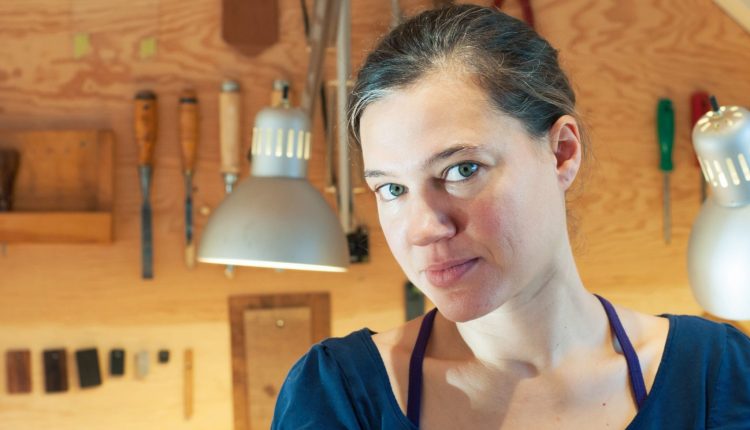 To say Joshia de Jonge was born to make music wouldn’t be an understatement. From a young age, the Quebec-based guitar maker recalls spending days in her father’s workshop and taking quickly to the craft. 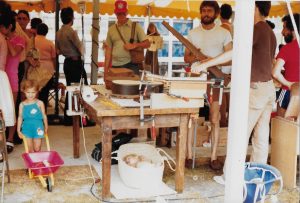 “My dad is Sergei de Jonge, who is a pretty respected luthier. When he and one of my brothers started making instruments together, I got a bit jealous and wanted to try it too,” she tells Wood Industry.

From that point forward, de Jonge went from playing with toys in the sawdust to working with the tools. In 1992, at the age of 13, her at-home training culminated in the creation of her first guitar. By 16, she was joining her dad at tradeshows and seizing opportunities to showcase her work.

“Eventually, I started going to shows on behalf of my dad, and I’d bring along one of my own guitars. Things got more serious from then on,” she recalls. 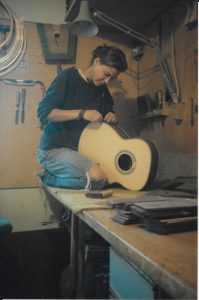 The next few years would see de Jonge hone her craft by working alongside her father and assisting during his guitar-building classes. Eager to learn more, she sought out further hands-on training within the workshops of noted Candian luthiers Géza Burghardt and Jean Larrivée. Then, in 1998, her entrance into the luthier trade was made official when she received a standing ovation for her craftsmanship at the Guild of American Luthiers Convention.

“That was such an honour, especially since the guitar was the first one of mine to use a lattice design that my family had developed,” she says.

With mounting successes and a proven talent for the trade, de Jonge was ready to branch out. So, in 2016 [she] started her own workshop in the Gatineau Hills of western Québec, Canada, alongside her husband, Patrick Hodgins, who shares the luthier talent.

“It felt like the right time,” she says. “We’d worked alongside my father for many years, and were ready to have our own space.”

Today, de Jonge can be found toying amidst the sawdust making classical guitars that have been in the hands of musicians worldwide. Her materials of choice range from European, and Engelmann Spruce, and western red cedar for the tops, for the backs, African Blackwood, Brazilian, and Indian rosewood, Cocobolo, Gabon Ebony, Pale Moon Ebony, Katalox, Ziricote, and Maple–sourced from countries around the world. 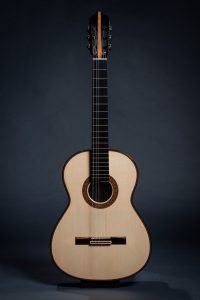 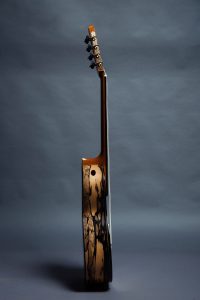 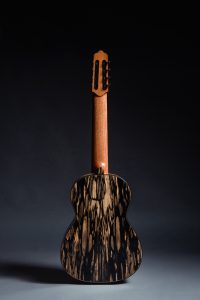 “Lately, I have particularly been into the various ebonies for the back and sides, and I love African blackwood as well,” she shares. “There are always woods that stand out more than others, but I enjoy anything I’m working with at the time.”

Apart from building, de Jonge also opens her shop up for guitar-making courses covering the entire process from design, sourcing, and bringing musical visions to life.

de Jonge has come a long way since making her first Alto guitar at 13. Now, with years of experience guiding her hand, she finds herself reflecting on those early days in her father’s shop.

“It’s funny,” she says. “[Guitar making] was not something I planned to do or ever thought I would do. The brother (Sagen) who started before me seemed way more into it, and we’d always talk about him having a shop when he was older. I didn’t think I’d be the one doing it, he’s now a software developer.”

Nevertheless, de Jonge says she is happy to have “kind of fell” into a trade that allows her to flex her talents and satisfy her need to create. She also finds joy in working alongside her husband in a creative and welcoming community, one in which she is happy to see opening to more artists.

“In the beginning, I realized a lot of people playing guitars and making guitars tended to be men, but that’s changing, and it’s great to see,” she adds. 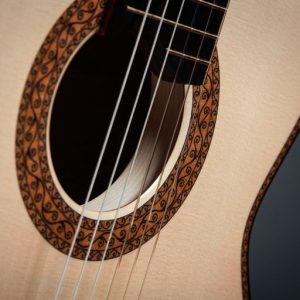 Recently, de Jonge marked another career milestone with the creation of her 100th guitar. Reflecting on the one-of-a-kind project, she says, “It was early into the pandemic when I started thinking I would be displaying at festivals in the summer. Every year I build one guitar for festivals that I am free to experiment with new designs (other than that one I build every year the rest are custom made for clients, and the client picks their specific design). I decided to celebrate my 100th guitar by building it out of all pale woods. I used maple for the back, sides, and neck, a Swiss “moon” spruce double top, with eastern white cedar for the inner layer, and a nomex core. I designed a new mosaic pattern to go around the perimeter of the top, and some inlay on the headstock, heal cap, and end graft.”

As for future projects, de Jonge notes she is eager to transform wood from ‘The Tree,’ a centuries-old mahogany tree that has taken a near-mythical status among guitar makers, adding, “It’s this incredibly famous tree that was cut down in the mid 60’s, it’s highly figured beautiful wood, and there’s only a limited amount, but I was lucky to get a hold of a set and I’m excited to make a guitar from it,” she says.

de Jonge looks forward to getting her hands on even more interesting projects. That being said, she is equally intent on setting a more chill business pace: “I’m not really looking to expand right now; if anything, it’s the opposite. My waitlist is fairly long and actually closed right now because I don’t want to get overwhelmed. Instead, I want to spend a little more time with my guitars, get a little more detailed, and try more interesting designs.”

No doubt, like many in the luthier trade, the trick is finding the sweet spot between art and business. And with advice for others taking up the craft, she adds, “You have to love it. It’s not the simplest way to make a living, so you need that passion, which I think most people in the industry have.”