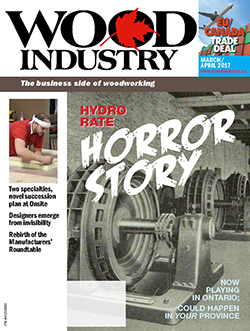 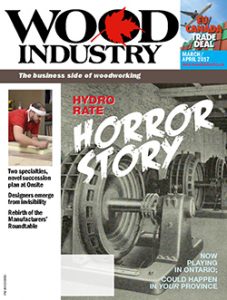 EVERYONE THAT PAYS THE BILLS in Ontario knows that electricity rates in the province have been on the rise, whether the invoice arrives at home or business. The conventional wisdom is that, somehow, if you become more energy efficient and consume your electricity in off-peak hours, your hydro rates can be kept under control.

So why are businesses and manufacturers in Ontario protesting so loudly that some are threatening to leave the province entirely if they don’t get a break soon?

“Ontario’s energy costs are rising so quickly many manufacturers are re-assessing whether it makes sense to expand production in this province,” says Jocelyn Williams Bamford, vice president of Automatic Coating and spokesperson for the Coalition of Concerned Manufacturers in Ontario (CCMO), both based in Toronto, Ont.

“Industrial electricity bills have soared over the past year, and with Ontario’s new cap-and-trade system, electricity and natural gas costs are likely to jump by at least another 20 percent.”

And although the province removed the HST on residential electricity in January, that won’t come close to offsetting the energy and transportation cost increases that lie in store for smaller manufacturers across Ontario, many of whom are tied to contracts that prevent them from passing costs along in the form of higher prices to their customers, the CCMO says.

Ontario manufacturers, including wood manufacturing shops, have reduced greenhouse gas emissions 15 percent since 1990, according to a study by Canadian Manufacturers and Exporters.

“Manufacturers have become more competitive and have been able to reduce emissions at the same time because they have invested in new technologies,” says Bamford.

According to Peter Gallagher, president of Convoy Custom Interiors of Concord, Ont., and president of AWMAC Ontario (Architectural Woodwork Manufacturers Association of Canada, Ontario Chapter), taking energy conservation measures only goes so far for a wood shop in the province. On a monthly electricity invoice for Convoy, ten items on the hydro bill are listed, starting with a basic charge at $0.024 per kWh, the same amount that Ontario charges out-of-province users, such as in the U.S.

GALLAGHER NOTES THAT THE PROVINCE has an electricity glut so that this rate is offered in part from the “spillover” from Niagara Falls hydroelectricity. The problem with his bill — and just about every other manufacturers’ — lies in the nine other charges: Global Adjustment number one at $0.12/kWh for one-third of Convoy’s smart meter reading; Global Adjustment number two at $0.11/kWh for the other two-thirds; a customer charge per month; distribution charge; transmission network; transmission connection; market service; standard supply charge; and, debt retirement charge.

As a business, Convoy does not receive an HST break, so that in effect becomes an 11th charge. Because the manufacturer consumes so much electricity every month, the costs are clearly delineated on each invoice.

The aggravating thing for Gallagher and other manufacturers in Ontario is that out-of-province electricity buyers only pay the basic charge. The CCMO has called on the Ontario government to make all cost increases resulting from its cap-and-trade program visible both to consumers and to all of industry (depending on different factors, some manufacturers don’t see this). It also recommends a tax credit that would offset the impact of higher energy costs and encourage manufacturers to invest in new technologies.

Julie Kwiecinski, Ontario director provincial affairs, Canadian Federation of Independent Business (CFIB) based in Ottawa, Ont., agrees about having complete transparency on hydro invoices. “The required global adjustment fee has to be visible and explained on all bills,” she says. “Right now this fee is not seen on any residential bill and even with our small business members, where I would say maybe 10 percent see it on their bill right now.

“Our thinking is you need to be transparent about this so that people understand where their money is going.” The global adjustment is essentially the difference in the purchase price of energy and the contracts the governments sign, according to Kwiecinski.

“These are essentially fixed contracts, generally for 10 and 20 years. No matter what happens in the system the government has to pay the contracts, not just for wind and solar but for nuclear and anything that’s out there as part of the energy mix.”

Although some CFIB members took advantage of Ontario government contracts by investing in wind and solar farms to receive subsidies, most are suffering under current rate structure. The association canvassed its Ontario members in January and had close to 3,000 responses for a survey about hydro rates in the province. One of the questions that was asked was ‘how have your electricity costs changed in the past three years?’ Of those members that responded, 48 percent reported a 20 percent increase or more to their rates.

“That is huge,” says Kwiecinski. “It has gotten to the point where it is affecting peoples’ competitiveness.”

Another question on the survey was ‘how have the electricity costs affected your business over the last three years?’ To this, 56 percent of members said they have increased the price of their products or services, 13 percent said they have considered closing their business or moving to another jurisdiction.

Both the CFIB and CCMO realize that moving isn’t an option for everyone when the business relies on the local economy, however. Automatic Coating falls squarely into the 13 percent, according to Bamford. “Since 2012 my hydro rates have gone up from 12 cents per kilowatt hour to 21 cents a kilowatt hour,” she says.

The company has looked across North America and is looking at moving to Mississippi because the state can provide electricity at 5.56 cents per kWh. “Ontario really needs to have a plan to be cost competitive in its energy policy for all manufacturers in North America,” says Bamford.

“This is part bad policy planning and part bad energy policy where we are today. They need to fix it.” Like Convoy’s monthly electricity tab, the November 3, 2016 bill at Automatic Coating reveals just what Ontario manufacturers are up against.

BAMFORD PUTS THE DISPARITY down to misguided green energy policies such as payouts to wind farms at 18 cents per kWh. “So little of my bill is actually what I can expect through energy usage. We already spent $200,000 on equipment to try to reduce our energy consumption and electricity costs, but we see our bills continue to go up.

“Now could we shift everybody at night to take advantage of lower rates? We run a day and afternoon shift. I can’t go to my employees and say, ‘guess what?’ I know a lot of our employees have childcare responsibilities. They complete their shifts and then go home and pick their kids up from school. It would be unrealistic for me to have employees work overnight.

“This is from a government that talks about ensuring that employees have a good work-life balance.”

“Maintaining them just didn’t seem cost-effective,” he says. Wood shops can defray some energy costs if they create pellets from scrap or burn offcuts to heat facilities during cold weather months, but this requires a certain material processing volume and further investment, he adds.

Convoy also looked at installing soft motor starters on its equipment, but found the return on investment prohibitive in the current climate of climbing electricity rates.

PART OF THE SOLUTION for manufacturers in Ontario is to reduce electricity costs would be to remove the debt reduction charge for all businesses, something that the CFIB is lobbying the government for.

Another solution is to eliminate the smart meter pricing and institute a tiered system at lower rates with the business getting to choose its peak hours, according to Gallagher. The Globe and Mail reports that “many medium-size manufacturers aren’t eligible for the province’s new hydro rebate because they use more than 250,000 kWh of electricity a year and exceed a demand of 50 kW. And many also don’t qualify for the Industrial Conservation Initiative (ICI), an incentive program for larger electricity users with a monthly peak demand over one megawatt.”

The new cap-and-trade system, brought in to reduce Ontario’s carbon footprint, is also a challenge for manufacturers, according to the Globe.

The CFIB warns that businesses outside Ontario should be on their toes, too, as the complicated system of calculating additional electricity costs hidden inside green energy and carbon credits threatens to spread.

“We can’t emphasize the urgency of the situation enough,” says Bamford. “Ontario stands to lose good, high-paying jobs if something is not done to mitigate the negative impacts that cap-and-trade will have on smaller manufacturers across the province.”