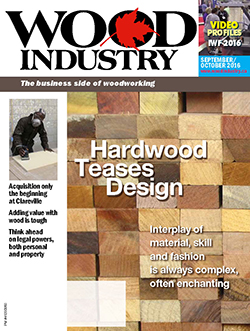 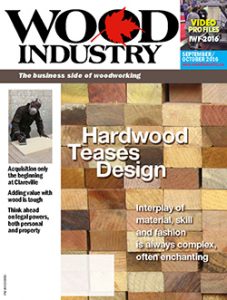 Whether solid woods or veneers, the look and feel of well-chosen hardwood species make a statement.

So for designers and manufacturers, picking the right raw product for the fickle consumer market involves some tough decisions.

Public tastes remain cyclical, oscillating between darks and lights, between contemporary and classic looks. But for manufacturers, the cost of wood is also cyclical, with maple in plentiful, cheap supply one year and birch or oak the next.

Design tastes can be geographical as well, according to Paul Epp, professor of industrial design at OCAD University in Toronto. “The species that are popular are determined more by U.S. media than by Canadian taste,” Epp says. “Designers are going to be looking at the same magazines that everybody else is reading.”

Exotic species are always going to be a fringe product as they “never gain critical mass” in the market, according to Epp.

When it comes to exotic hardwoods, sustainable sources and cost are critical issues for designers to consider.

“There is a lot of mischief in China trade with poached wood coming from Myanmar, Laos and Thailand,” says Epp. Plantations of teak in Indonesia mark a legitimate return to the market of that species, however.

One casualty of the 1960s was Brazilian rosewood that was plentiful at the time. “It made the best classical guitars,” Epp says, “but you’d have to careful transporting across borders now.”

The interest in mid-century modern designs in furniture would provide a market for species such as teak, once they are deemed sustainable again, says Epp: “Medium dark woods such as walnut and cherry would also fit this trend. They will also be more popular than they have been at one time.

“A lot of the species have to do with tone. You have dark tone, medium tone and light woods. That design trend cycling is basically whether you go from dark to light or medium. That’s the change.

“At one time wenge would have competed with walnut, and cherry can sometimes compete with mahogany.”

And according to Fordaq, a Brussels, Belgium-based online directory of lumber and wood products, “the new government in Myanmar is working its way through legislation and making changes that will impact the timber sector in order to encourage private plantations.” So different species harvested to near-extinction can have a comeback, it would seem. Honduran mahogany has made a modest return with plantations cropping up in Fiji, for example.

A custom furniture maker has to be cautious about designing with exotic species. However Torsten Lihra, knowledge transfer leader at FPInnovations in Quebec City, Que., says that these hardwoods are also quite attractive to the flooring market. “The manufacturers always want to have something new to show,” says Lihra.

Exotic imported hardwoods need to be tested over time to see how they behave in our environment. “There can be checking and colour changes,” Lihra says, “they may not be stable and even turn green.”

Manufacturers have found that discolouring of wood species may enhance a design in some cases, making it more appealing to certain clientele. Lihra notes that maple and birch can turn yellow over time, which can be quite beautiful.

Walnut is a hardwood species that is popular for flooring and wood panels. A chocolate brown initially, it needs protection or it turns to an ugly grey appearance after a couple of years exposed to direct sunlight, Lihra says.

The vulnerability of walnut is not on the ultraviolet light spectrum, but rather visible light — and it has to be protected with the appropriate coating. Stylemakers Public taste, it turns out, can be manufactured, according to Lihra. Beech is an important species in the European hardwood market, but is notoriously difficult to dry properly and requires specialty equipment. Not only that, but the centre of beech trees reveal a darker brown, striped look that German consumers found undesirable.

“There was a 10-year awareness campaign financed by the big equipment manufacturers in Germany so that today the brown striped wood is more popular than the clear one,” Lihra says.

Robert Kelly, U.S. vice president sales of Louiseville, Que.-based BDM Furniture, a member of the Quebec Furniture Manufacturers Association, calls birch a company “workhorse” due to its carbon footprint. He notes that reforestation of the species and its proximity for sourcing in Quebec and New England make it attractive to his company.

The reason for the concentration of furniture makers in eastern Canada is that approximately 80 percent of Canadian hardwoods are being harvested there.

“Growing in cold weather produces a tighter grain and provides a consistency of finish,” says Kelly. From a design perspective, he adds that birch takes on wood tones and colours quite readily with a minimum of coatings.

“Consumers are gravitating to products with a lack of added toner,” Kelly says. This “shammy” finish “that really, truly represents the wood, how that wood is going to take the colour, the variances in which it absorbs that colour is what the designer and consumer, what she’s really liking in a wood furniture product.”

Birch is popular at BDM Furniture for chair manufacturing is because of comfort. “One of the ways to achieve comfort is through steam bending. In using birch, we found that it is less likely to split and crack during these processes as it would with oak,” Kelly says.

What Kelly is seeing sold now is an inconsistency of species hardwoods in furniture sets. “One wood is a table, one wood is a chair, and for our consumer, she’s not willing to accept those variances in her home,” Kelly says.

“There is a place for that, but we’re not going to become an ‘everybody else,’” in the market.

Kelly does see more imported hardwood species these days, but their success is more dependent on the economy and price sensitivity of consumers. His company is also dabbling in solid walnut veneers and ash for the barnwood look, as well as looking into cherry.

Epp observes that “most product and industrial designers are actually quite ignorant about wood species. If they are designing in wood then they probably have a manufacturer in mind, and the manufacturer is more likely to dictate the species used than the designer. “Through their sales network, the manufacturer will know which species has the best chance of selling.”

This has changed from the 19th century where Danish designers, for example, would have a background in cabinetmaking and know the assembly process, Epp explains.

The issue of separation of knowledge between the designer, the trained woodworker and woodworking manufacturing operations management, was highlighted by Lihra. What happens when managers don’t understand the basic properties of wood — how it absorbs humidity, changes shape, expands or otherwise is dimensionally unstable?

Lihra uses the example of an unsuspecting kitchen door manufacturer who decides to stain or varnish a panel after assembly in the middle of a humid summer. “The door ends up with two vertical white stripes in the winter after the panel shrinks.

“The manufacturer has to know to do the staining before assembly, and to have the glue point in the middle so that the sides can move later,” Lihra says. “Not only that, but the stain has to be applied to both sides to avoid cupping and warping.” As time goes on, that knowledge could be lost, leaving time-pressured managers to try to cut corners without realizing the consequences of their actions.

Lihra even had one manufacturer come up with the “brilliant idea to get rid of the door frame assembly. ‘I will route out a line to give the appearance of a frame.’

“But next summer you won’t be able to close the kitchen cupboard door,” Lihra laughs.

However, with design volatility in manufacturing, marketing, consumer demand and material availability worldwide, it is unclear which way or ways the market will consolidate. It appears as if the savvy manufacturers and lucky picks will define the next big successes.

Powers of attorney: Property and person