What started as a side hustle in 1993 has now become a juggernaut in the wooden pallet market. Fred Vrugteveen, general manager and co-founder of Niagara Pallet and Recyclers, along with his father Dirk and brother Mike, says the business grew out of a need to generate income during the slow season of his father’s fruit and vegetable wholesale/retail business.

“In that [fruit and vegetable] business we would accumulate a lot of pallets, return them to suppliers who would buy them back from us,” says Vrugteveen. After receiving a high volume of requests for more pallets, the father-son trio would collect pallets from other companies that no longer needed them and sell them back to suppliers. Hustling with one truck led to another and another. The fruit and vegetable business gave way and Niagara Pallet and Recyclers was born.

Fast forward 30 years and the company employs 75 people and collects in excess of about a million pallets to repair and resell per year. They also manufacture slightly under 500,000 of their own new pallets. The core of the business remains to collect, dismantle and repair pallets that can be recycled and reused, which is an added boom for the environmental impact of this product. The manufacturing side occurred about 15 years ago after requests were made from clients. “There was a drive to create new sales in manufacturing in the last four to five years,” explains Vrugteveen. 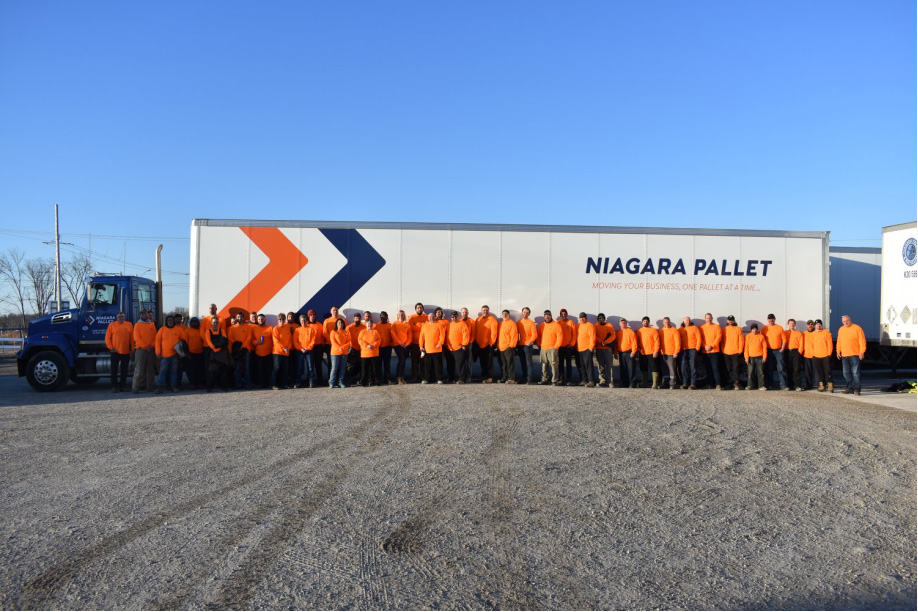 As the company has grown and both salvaging and manufacturing have grown with it, there was a recognition that automation was a key ingredient missing that would really aid the business, as well as allow growth to occur within the industry.

“We’re in a position to double the volume of what we are doing here,” he adds. “The first element is the robotic dismantling of used pallets that we can’t rebuild or resell. The second part is to automate the cutting of our lumber with robotic optimization to produce better quality lumber for the assembly of our pallets, and the third part, which we hope to have running next year, is to automate the assembly of the pallets we are building.”

After pursuing the automation route and becoming aware of the federal

government’s FedDev Ontario program, and completing the stringent application process, Niagara Pallet secured funding for its strategy to the tune of $3 million through the Jobs and Growth Fund.

“Our government is focused on creating good jobs for Canadians and strengthening our supply chain, which is exactly what this $3 million dollar investment in Niagara Pallet and Recyclers Ltd works to achieve,” said the honourable Filomena Tassi, minister responsible for the federal economic development agency for Southern Ontario.

“This investment will create 30 jobs and help Niagara Pallet adopt new, first-in-Canada, systems to measure, sort and cut used wood pallets. This new system will help alleviate wood pallet shortages across Canada while also reducing waste by recycling pallets for further use. Wood pallets are a crucial piece of Canada’s supply chain and this investment will help Niagara Pallet reduce waste, meet growing industry demand, and contribute to a greener economy. By making smart investments, we create good jobs and develop innovative solutions that will alleviate pressures on supply chains and support a growing economy that works for everyone,” Tassi added.

It’s a win-win investment, where Niagara Pallets can continue to grow but also help the general economy as it expands to export products outside of the province. This will also help achieve an employment metric set out by the government. Vrugteveen says that what started as a mom-and-pop business has grown into an incredible obligation to support the business, those who work in it, and the industry as a whole.

The Winter issue is out