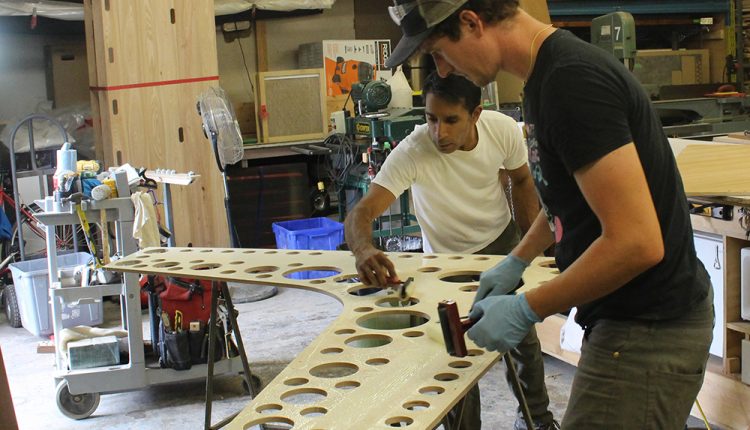 Reain and Morbi take care of it all

Exposure to different environments and conversations can take you anywhere. The origin story for this shop profile began at animation artist presentation for the Cuphead video game at OCAD University in Toronto, Ont., last winter, where the designers and animators behind the visuals were speaking.

Ali Morbi of Morbi Design constructed sets for the hit Xbox One and PC game and demonstrated how he created these to the college crowd. Afterwards, it was clear this was a talented woodworker with more to say.

Morbi, it turns out, has a close business associate, Alan Reain of Reain Custom Projects, who share a 1,200 square foot rented space in Toronto’s Junction Triangle neighbourhood. Their businesses have had different names since they bunked in together at the shop space in the spring of 2015, and still do — but that sounds like that could change in the not-too-distant future.

Morbi calls Reain his partner. “We have two different companies but if I get a job that I need help on I hire Alan and vice versa,” Morbi says. Both agree that they’re thinking about forming one company.

According to Reain, “I think that it’s at the point now where we need a common brand that kind of lets us both promote what each other does.”

The two were looking separately for a shop to occupy and ended up finding each other on Kijiji, the social media goods and services platform. “It turns out that we work well together,” says Morbi.

Reain’s immediate background comes from carpentry in the film industry. Prior to that he had some cabinet shop work, as well as general construction, renovation and custom home building experience. While he held an aerospace engineering degree, Reain felt frustrated by that discipline as an occupation. “It turns out that you don’t get to build anything actually with your own hands,” he laments.

Up until meeting Reain, most of what Morbi did was hobby work. “I left high school and I just started working on my own,” says Morbi. “I worked every manner of job you can think of and was a photographer at one point. Then I turned into a fabricator slowly but surely.”

Morbi’s parents had a sign shop that he took advantage of: “Eventually when they retired they bestowed upon me the vast majority of equipment. That was my transition to getting into my own shop. I don’t think I would have been able to afford a $100,000 machine right off the bat.”

That machine is a well-used Axyz model 4008 CNC router that is still going strong. “It has been super useful — I think we have utilized this thing in ways that people usually don’t.”

Primarily the CNC router is used to create cabinetry, but it also produces a moderate amount of metal work, along with three-dimensional prototyping for engineering firms and movie props. “Most guys use this thing to blast out cabinet parts,” says Morbi.

The technical capacity of their “wild west” inner-city shop, itself an increasing rarity, gives the two an advantage over local competitors. Adds Reain, “a lot of the shops that have CNC capability are out of the city.”

When they moved in into the shop, there was literally nothing, according to Reain. “Our equipment has upgraded and changed a lot, along with the configuration of the space,” he says. “When we first moved in it was more or less a matter of unloading a bunch of tools out of the truck and putting them on the floor.”

Over the years the two have slowly kept improving their capabilities. “This wasn’t a situation where we got a huge bank loan and bought everything all at the same time and went into a huge pile of debt,” says Reain. “It was incremental in figuring out what we needed and what people would pay us to do.”

Because of Reain’s recent work experience, the two get a certain number of referrals from people in the film industry, as well as referrals from other clients they have done work for. “They mention it to their friends and co-workers and we end up with jobs that way,” says Morbi.

Most of the jobs that they have worked on for the last couple of months have been referrals through people they had worked with in the past. “The guy that referred this prop to us,” says Reain, pointing at a table under construction, “I worked at his shop when I first moved into Toronto. The house that we just finished up working on was an architect who was referred by the owner of another shop that I used to work for. There have been a few of those.”

Being sociable is key to their business growth, according to Morbi. “You can talk to someone and they can know and like you,” he says, “and suddenly they act as an extension of your sales ability. Someone else can mention something offhandedly and they can say ‘oh yeah I know someone who can do it.’

“Which I find more valuable than a kind of an anonymous ad. A potential customer can respond to these but don’t really know what to expect from the maker — us.”

Reain believes working on building a good reputation is paying off. “It seems to be an upward spiral,” he says, “in that when you have a good reputation you get good clients who want good work, and who are going to pay appropriately for it. You can serve them really well and they have a good impression of you. It keeps building on itself.”

Morbi laughs and points out that shoddy work just leads to cheap customers looking to for the lowest price.

Jobs acquired from online ads on Kijiji and Google AdWords have turned into longstanding relationships for the two. “I did a couple of projects now for a product development engineering company,” says Morbi. “They found us through an online ad.”

CNC-enabled woodworking seems often to be what draws people in, according to Reain. “I guess the type of people who are looking for something a little more creative, a little more technical,” he says. “And a little more problem-solving and innovative-related, rather than conventional stuff that could be done at a higher volume.”

Most of what the pair does is low volume and often one-offs. “Which is nice,” says Morbi, “I prefer it. I like focusing on one particular project and solving all of the problems related to it and then moving on.”

A small shop may not turn over large, lucrative jobs, but an agile shop means that many customers can be served across a large variety of work. But being too agile can have its downside, such as when a project is accepted that others passed on.

One architect was looking for help on a particularly complex job, says Reain. “I know at least one other builder and probably more who were asked in on that project. Frankly they were intimidated by it because it was a pretty tricky on-site-project.

“If it wasn’t carried out with a high level of detail and pretty successful execution, it would just have not been that nice. We were foolish enough to say that we could do that.”
The two have combined agile, on-site build capabilities paired with flexible, on-site consultation skills.

As an example, on one project, they wrapped the centre column of a client’s split-level house in white oak. They had to cut it in around existing stairs that were pre-installed, so it involved some CNC machining, according to Reain. The process meant that measurements had to be done manually, but also that photographs had to be scaled, brought into software and then laid out for their CNC machine.

“At this point,” says Morbi, “photographing things and applying measurements on a portable tablet is useful because you can show it to the client and kind of have the concept bounce back and forth on-site, until it’s exactly what they want.

“That iterative process happens way faster than it used to. Instead of trying to draw something up and hoping they can conceptualize the idea.”

Or to put it another way, says Reain, “its way easier to take site measurements than trying to draw out a crappy hand sketch on the fly. Just take a photo and dimension the photo instead.”

Luckily for Morbi and Reain, the cost of the downtown real estate squeeze hasn’t caught up with them yet, with the location providing benefits that shops in the suburbs aren’t likely to experience. An across-the-alleyway interior design firm neighbour now does business with them.

“And,” says Morbi, “we have actually gotten a couple of clients who have just walked by these doors.”