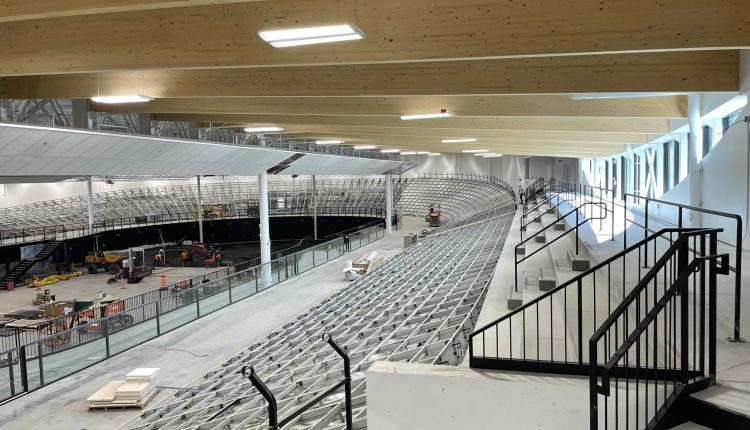 High above the heads of cyclists in the newly-opened velodrome in Bromont in Quebec, massive wooden beams help support the weight of the roof and add an atmosphere of warmth to the sports facility and its new cycling track.

“The workmanship looks amazing,” tweeted former professional cyclist Steve Bauer after a visit to the velodrome while it was still under construction in September. “Can’t wait to ride the boards this fall.” 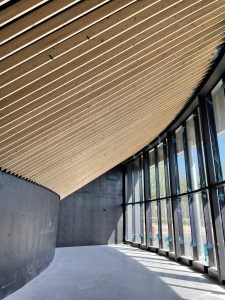 Those beams supporting the roof of the $22 million Vélodrome Sylvan Adams-Centre Multisports Desjardins are made of spruce glulam, a stress-rated, engineered wood product consisting of wood laminations bonded together with durable, moisture-resistance adhesives.

They and the spruce glulam setting for the spectator stands were supplied a little over two years ago by Canadian lumber industry juggernaut Goodfellow Inc. which landed the contract just as the Covid-19 pandemic was sweeping across Canada, says Pedro Da Silva, general manager of the company’s engineered wood, laminated wood, goodlam, and industrial divisions.

Since then, Goodfellow, a publicly-traded, diversified manufacturer of value-added lumber products and wholesaler of building materials, has supplied mass timber beams to many other projects across Canada.

After also supplying the Douglas fir beams that support the Duchesnay Creek Bridge connecting North Bay with the Nipissing First Nation during the first year of the pandemic, Goodfellow also supplied the spruce mass timber structure for the largest elementary school in Quebec last year. 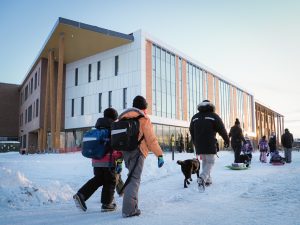 That building, the $36 million École Vauquelin in Longueuil, is the first three-storey school built in Quebec with local wood to give it a more welcoming feel and use more environmentally-friendly materials.

“We have two CNC (computer numerical control) machines, and we do glulam out of spruce, Douglas fir, southern yellow pine, and we’ve even done cedar,” says Da Silva.

In the past seven years, glulam beams and other mass timber products such as those sold by Goodfellow have exploded in popularity, with demand doubling during that time, says Da Silva.

“There’s been tremendous growth,” he says. “It’s better for the environment and architects love it.”

“You can sand [these mass timber beams] and make it architecturally appealing. Steel – and I don’t want to belittle the material – is not going to win any beauty contests.”

Wood, though, can and does help win design competitions.

When the City of Montreal re-opened its Biodôme in 2020 after a major upgrade, the four-habitat attraction featuring plants and animals from the Gulf of St. Lawrence, Laurentian maple forest, Labrador coast, and the sub-Antarctic islands featured stairs made of a wood known for being hard, strong, naturally resistant to rot and abrasion – and beautiful. 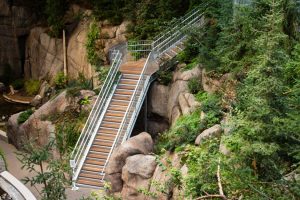 Goodfellow supplied that wood, also known as Brazilian walnut, which comes in medium to dark brown colours, much like mahogany.

“It’s a beautiful staircase,” says Da Silva. “It was made of Ipe wood from Brazil. It’s the densest wood out there. It’s probably the most resistant and it’s an oily wood and very popular for park benches.”

It’s been a long road from the company’s humble beginnings when it was founded in 1898 by George C. Goodfellow, a lumber broker. It would be four years before the then-fledgling business even had its own lumber yard in Montreal. In those days, the company did a lot of work supplying wood for frames and running boards for cars and trucks.

In the late 1940s, the company moved under the leadership of its founder’s son, Charles Goodfellow, to Ville St. Laurent north of Montreal.

But the company in its modern form, as a publicly-traded company, only came into existence after Charles Goodfellow’s brother, George D. Goodfellow, bought the company in 1970 and decided to go public with an initial public offering on the Montreal Stock Exchange in 1984.

With that influx of capital, the company expanded its custom milling, treating and distribution capabilities.

When Richard Goodfellow, Charles Goodfellow’s son, took over as president in 1989, he moved the company’s main operations and head office to its current location in Delson on the south shore of Montreal.

Patrick Goodfellow, his son, has been the company’s president since 2017, and now oversees a lumber empire stretching from coast to coast with 12 sales offices from Vancouver to Dartmouth, six manufacturing and production operations, and upwards of 650 employees. The company’s annual revenues are upwards of $600 million with a market capitalization of almost $103.8 million.

In mid-November, the company’s stock, listed on the Toronto Stock Exchange under the GDL ticker, was trading at $12.12, slightly above its one-year mid-range of $11.55 per share, and had been on a generally upward trajectory since late May. 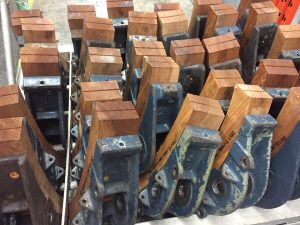 Over the years, company’s products have been a part of much of what comprises Canadian culture, including the wood for the mast of the iconic Bluenose II sailing ship and doors for the locks on the St. Lawrence Seaway.

“Right now, we’re supplying the City of Montreal with brake pads [for its Metro subway system] and they’re made with yellow birch,” says Da Silva.

The company is also providing the timber, including bridge ties, stringers and decking, for upgrades to the Chief William Commanda Bridge spanning the Ottawa River and linking Ottawa’s Trillium Pathway with the Voyageurs’ Pathway in Gatineau. That work is part of a $22.6 million project to upgrade the multi-use pathway system and is due to open to the public next spring.