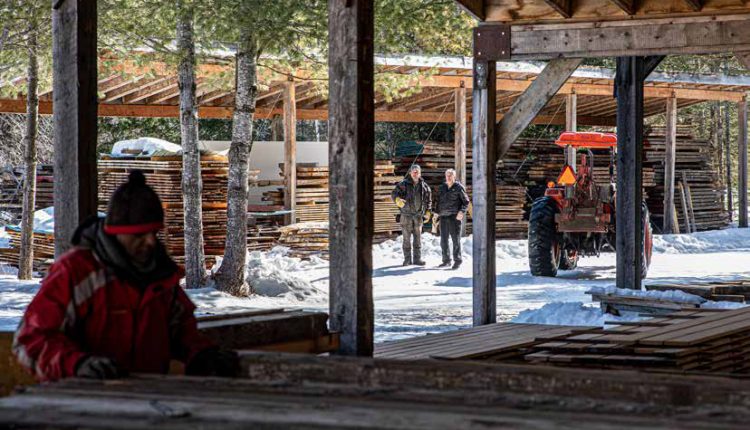 If there’s a defining characteristic of Yuill McGregor, it’s that he won’t do as he’s told. Not even from the start. Take, for example, McGregor’s entrée into his North on Sixty business along Highway 60 near Algonquin Park in Ontario. McGregor had a vision for a high-end custom shop serving the elite of the Muskoka and Huntsville cottage market. Toward that end, he bought 150 acres of mixed timber right along the highway and submitted a plan for a 7,500 square-foot production facility, complete with a showroom.

Once the money was down and the deal was done, the government came up with a different idea. The size limit on the building, they said, would be 2,500 square feet, not 7,500 square feet.

Frustrated, but not outdone, McGregor noted there was no height restriction on the specs, created a 2,500 square foot building plan, submitted the plan and got his permit. The second floor was already on when the ministry dropped by to challenge the project. “I showed him my permit,” McGregor recalls with a smile. “He was quite annoyed, but by that time there was nothing he could do about it.” According to McGregor, the site plan also allowed for five, smaller buildings, four of which he erected as housing for the moulder, housing for storage, housing for “forestry,” et cetera.

The problematic showroom was intended to occupy the second floor, but McGregor decided that part of the plan needed adjustment. “The idea was to capture traffic traveling the highway. It didn’t work that way,” he says. “By the time people get here, they want to get where they’re going, and nothing will stop them. When they leave, all they want is a greasy cheeseburger and home.” The few that do stop by, he says, come on cold or rainy days to kick tires, say they have seen the sign driving by and maybe buy a trinket, so he keeps some cutting boards and other items for souvenir shoppers and impulse buyers.

Fundamental to McGregor’s business is his view of sustainability. In the first place, he argues, wood is inherently sustainable, and he is both adamant about proper woodlot management, and critical of privately held woodlands in the Huntsville area and elsewhere. “They just let it go and become a major fire hazard,” he says.

As time passed, McGregor found his major markets did not lie within the boundaries of the Canadian Shield, as he had thought, but in the high-end, custom markets of southern Ontario and Quebec. Those markets tied in well with McGregor’s views of both sustainability and style, and McGregor became focused on making wood fibre behave in a manner consistent with architectural demands for both preservation and durability, as well as style. This led McGregor to form an alliance with a wood product called Kebony, which is natural softwood, impregnated with furfuryl alcohol to make it dimensionally stable and then processed further.

Inspired by his work with Kebony and driven by his market to provide cut-burl slabs for tables, end tables and similar products, McGregor started curing hardwood burl slabs by making a bath of roofing membrane and a frame, and soaking the pieces in polyethylene glycol, or PEG. According to McGregor, he can gauge the stage of the cure by weighing the pieces as they go in, and then calculating the amount of water replaced by PEG as they come out. “The problem with burls,” he says, “is that the face is all endgrain, and as the water comes out the burl slice warps and checks.”

McGregor is particularly focused on forest management as a secondary producer. He owns his 150 acres, which he uses for harvesting as warranted, but he also thins and uses the culled timber to heat the buildings, which he designed to utilize under-floor, radiant heating, which he loves. With radiant heat (unlike convective, hotair heat), he says, when you open the doors and the winter wind blows through, the place is still warm when you shut the doors. This is a benefit with employees.

Speaking of employees, McGregor has had his own tussles with how to find skilled employees. One tactic he uses is to try and keep existing staff. As an observer that has been on more than a few shop floors in Canada, I flatter myself to think I can tell a talker from a doer, and McGregor’s staff likes him. In addition, McGregor has hired Livio Shenuely, a carpenter’s apprentice from Switzerland. “This is not cheap,” McGregor says, “but it’s worth it when you get needed skills.”

In addition to his own woodlot and Kebony, McGregor buys what he needs from local suppliers, plus he reclaims wood from construction and demolition projects from as far away as Montreal.

McGregor reflects that he was all about sustainability before sustainability was a word, and his history reflects that. However, he believes that the future of Canada’s secondary wood-products manufacturing industry depends on help. Specifically, he has noted from past issues of Wood Industry that our association resources are weak and lacking direction and resources. The government, specifically the Ministry of Natural Resources for readers in Ontario, has both a mandate and a budget to facilitate the wood resource as an economic tool for Canada. The problem, he muses, is in getting the industry and the government together. So far, as we have reported, there seem to be many hands wanting to touch that money, and little return when it’s granted.

So far, whenever the government has allocated funds for wood-products development, the only unified and directed group to take advantage of the fiscal resources has been the primary producers, as noted frequently in these pages. Possibly our associations and alliances are just doing what they are told. In that event, we might lend an ear to McGregor — the voice of one not doing what he’s told in the wilderness.

From prototype to patent