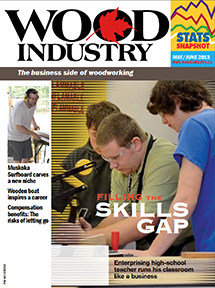 A unique program  gives hope to industry, and spirit

Dean Mattson is director of the cabinet-making program at North Salem High School in Salem, Ore. He had helped one of his students, a Hispanic girl he calls Mary, complete a class project: a very small table that measured 16-inches by 16-inches by 16-inches. She told him it was the perfect dining room table. He said, “For your dolls?” She said no; that it was for herself and her little brothers and sisters to eat on in the back seat of the car — where they were living.

Needless to say, that moment left an indelible impression on Mattson, the 58-year-old teacher and winner of this year’s WMIA Wooden Globe Award for Educator of the Year in Phoenix, Ariz. During his acceptance speech at the recent Wood Industry Conference (WIC), his recounting the story of Mary also left an indelible impression on the audience, as there was barely a dry eye in the room during the speech.

Mattson likes to use a personal passion of his as an example of how he reaches out to kids like Mary. He explains, “I like to use the metaphor of fly fishing, where you throw a bunch of artificial flies on the water and see which one will make the fish strike. Well, the wood is like the fly and the fish are the students.”

In Mary’s case, wood served as a way of raising her grades, her self-esteem, as well as her lot in life. She has gone on to become a secretary who can now afford an apartment for her family. For other kids in the program, wood has also served as a path from failure and poverty to success and achievement. According to Mattson, his cabinet-making program has a 100-percent success rate.

“What we have done here is essentially turn a traditional model of education on its head,” says Mattson. “We are using a cabinet-making program — I don’t like the term wood shop — to draw students into the class. So, this course is a core program, while English and math are the electives.

“So, what our program does is essentially instil in the students the need to learn concepts found in those other courses. They are drawn by working with wood, where they learn about things like geometry. They then realize they need to know more about these concepts, as well as how to read and write well, in order to succeed in the workforce. So they become motivated to take English and math, and to succeed in doing so.”

To say the program has been a success would be an overwhelming understatement. It has more than 400 students this year, with 500 on the waiting list. The program is set to expand next term so it can accommodate them all. Such companies as Custom Source Woodworking in Olympia, Wash., can’t hire enough of these grads, and states like North Carolina and Florida are inquiring about adopting the program themselves. The Wall Street Journal is set to write a piece on Mattson’s program with the title: “A new model of education for America.”

It wasn’t always this way at North Salem High School. Mattson describes the situation when he first got there: “Unfortunately, the wood program here was a perfect example of what’s happening across North America. Once a beloved teacher leaves, the program does, too. In our case, it was a man named David Anderson, who taught the course for 30 years. After he left, the program was in real jeopardy.

“So, when I was hired,” Mattson says, “I saw a real desperate situation. None of the kids wanted to take the course. They didn’t see anything in it for them. I knew I had to do something. It was really a matter of personal survival for me. If things didn’t change, I probably would have been out of a job.”

So Mattson resorted to what he knew, which is business. He describes his background as one involving extensive experience in corporate America, including the growing — from the ground up — of his own cabinet-manufacturing company. As he describes it, “I decided to run this high-school program as though it were a business. I started treating the students like I would my customers. In turn, I instilled skills in them that were in demand in the workforce. Things started turning around after that.”

For Mattson, he was charged with the job of running a wood-industry program, but he did not survey the institutions for candidates looking for wood-industry careers. He found students that needed to survive. “Twenty percent of my students,” he says, “live in cars.”

A similar program, WoodLinks, which started in Canada, has had the enthusiastic support of the industry, but remains challenged by finding candidates. Another program in the States, the Wood Career Alliance, includes many of the WoodLinks protocols, but includes standards testing that provides students with a “passport” certifying competence in each of several skills. Wood Career Alliance is merging with WoodLinks USA, and on July 31, WoodLinks will cease to exist.

One fundamental difference between the facility-to-student approach and Mattson’s student-to-facility idea may be Mattson’s idea of meeting the demands of the “customers” — or students — which, Mattson says, is another example of turning the traditional approach of education on its head. According to Mattson, “I started asking these students what they wanted out of the course, and the standard answer was that they wanted to make a good living after school. So that’s exactly what we have provided for them.”

This raises an interesting question: Why aren’t enough students across the continent making a good living after leaving school? We have been promoting the value of skills for years, and the so-called skills gap is one of the most-discussed phenomena in the wood trades on both sides of the border. According to Mattson, the prevailing model is in need of some fixing.

As Mattson bluntly puts it, “There is just too much of an emphasis on going to university. I don’t have a college degree, yet here I am engaging in a leading-edge approach to education. My students are ready to earn a living the moment they graduate from our program. We’re adapting to the reality that’s out there. There is a demand for skilled and motivated workers and woodworkers, and we’re doing all we can to try and meet that demand.”

This is in contrast to the traditional approach. While Mattson applies a business-like model to match students with employers, most schools appear trapped in methods that don’t meet today’s realities. Says Mattson, “Just look at the results. Students are lining up to graduate from a program, and employers are lining up to hire them. Unfortunately, that’s not happening in enough school districts today.”

While the North Salem cabinet-making program has drawn much interest and praise, it has also predictably come up against its share of scepticism. As Mattson describes it, “Even the local people here weren’t convinced at first. Some educators had their doubts, and local businesses were reluctant to hire our grads.”

Yet success breeds success. At North Salem High School, that success has led to a complete turnaround in public perception, which Mattson believes can be replicated across the continent. He adds, “I think we really need to shake things up. There is no reason why a program like ours can’t succeed anywhere in America or Canada. It’s simple, it can be tweaked, and it works.”

Speaking of Canada, there has been no shortage of discussion about the so-called skills gap. In fact, the news has been filled lately with stories related to the topic. The federal government is introducing a program that will give employers thousands of taxpayer dollars to train skilled workers. The temporary foreign workers program is under fire for allegedly taking jobs away from Canadians. And on and on it goes.

Editor’s Note: Wood Industry requested information of Canada’s WoodLinks program, which is managed by the Wood Manufacturing Council, but the information was not provided by press time. Comment on this story below.