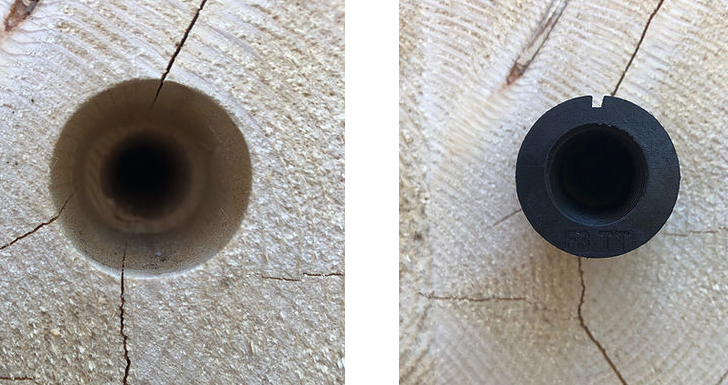 Nate Bergen has been in the mass timber business since 2007. He’s worked for all the major timber companies on the West coast – StructureCraft, Seagate Structures, Kinsol – and in 2018, he started his own company, F3 Timber Technologies.

“My friend and I were talking about what’s missing in the industry,” said Bergen. “Our very first conversation was about a glued rod imbed.”

There are lots of problems with the current method: gravity, entering the rod in the hole, air pockets, consistent depth, and speed of installation, to name a few. There has also been little academic research on the method’s efficacy, and Bergen recognizes that it makes engineers uncomfortable when they don’t have data to rely on.

The simplicity of F3’s design allows rods to be epoxied on-site just as accurately as in the shop. It keeps rods centered in the holes, promotes even distribution of epoxy around the rod as it is spun in, and prevents the epoxy from escaping. This component is not structural; however, it aids in the improved speed and quality of the installation, making glued rods one of the best connection options.

The product has been successful and used in some pretty major mass timber projects on the west coast: from the Esquimalt Town Square, to the Malahat Skywalk.

But despite their successes, Bergen still believes there’s work to do. Up until now, he’s been cataloguing data on his own, but there’s still a lot to learn.

“We’re starting testing in the fall – we got some funding with UBC, and we’re going to work with some grad students to learn more about our method and how we can improve it.”

It certainly seems like an interesting project for some master’s of engineering students, so it’s a win-win situation. Students get to work on a project with real-world applications, and Bergen gets results on improving his glued rod imbeds and his other products and tools.

“It’s a cool community of people,” he said. “It’s so interesting to see what other problems people are tackling in the industry.”

It’s also a way to see how these wood professionals can collaborate. So I had to ask: where does Bergen foresee mass timber and the world of secondary wood products intersecting in the future?

“I foresee us making better use of offcuts,” he said. “Turning the cut-outs from windows into tables, something like that. It’s a better way to capture our waste.”

Benefits of an External Business Consultant