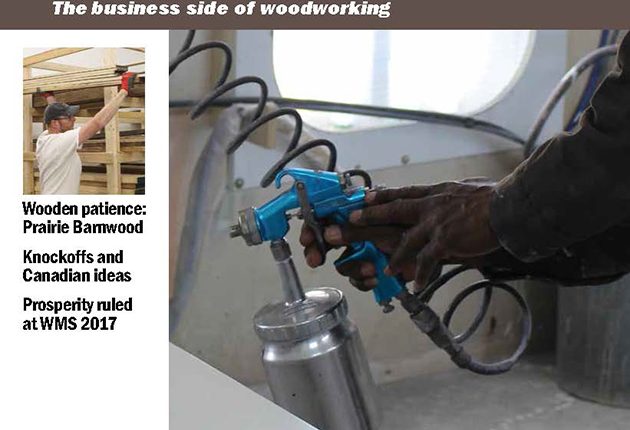 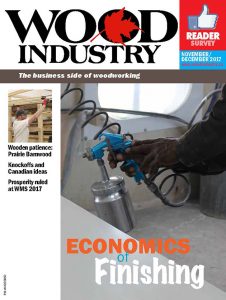 MILLWORK, furniture and cabinet shops face challenges when they can’t keep up with demand. So to stay on top of things, the decision often boils down to either hiring more hands, or taking the leap into automation.

Those same in-demand shops that also do their own spraying in-house manually grapple with having enough skilled hands on deck, too. One company that didn’t hesitate to embrace automation is Muskoka Cabinet Company of Alfred, Ont.

The now highly-automated residential and commercial cabinet company made the transition back in 2004 when everything was solvent-based, according to Muskoka Cabinet president Luke Elias, who purchased the business in 1989. “In 2003 at our old factory, we had not just a spray booth but a huge spray room,” says Elias.

“The operators of the hand guns had to be well trained. Of course if the guys doing the spraying were sick then we didn’t spray.”

The primary driver at Muskoka Cabinet was that it was looking to the future, from the standpoint of technological trends and meeting greater customer demand. “We knew that water base one day was going to be the standard,” says Elias. “Then you couldn’t really apply water based by hand — it had to be an automated spray application to maintain consistency.”

Anthony Stanghieri, vp operations at Rowntree Custom Millwork of Vaughan, Ont., said that when his 30-year-old, family-run company added flatline spray capability, the machinery had a huge impact. “Instead of employing more people to do one job you have less, but more consistent quality,” says Stanghieri. “The machinery helps your production grow.” Rowntree specializes in CNC cutting, solid surface fabrication and custom cabinets.

Although labour reduction is a by-product of spraying automation, the human touch is still very much required. “You can never take away the skill of a person’s hand and their eyes,” says Stanghieri. “The machine can only do so much. But you still have to have a good eye and know how to mix the products. The concept is still the same as the hand spray, but the difference is that the machine can run a lot faster.”

Operations manager Mark Doyle points out that after moving one year ago from an 8,000 sq. ft. facility to 20,000 sq. ft., and adding a flatline spray machine and drying room three months ago, it still maintains three temperature-controlled manual spray booths and a mixing room. “By no means are the booths running at full capacity,” says Doyle.

Doyle echoes the theme of consistency with automated spray equipment, with some human intervention. “It doesn’t matter if it is a Monday morning or a Friday afternoon,” he says. “Getting the proper mils on top is something we can set up manually. Then we know it is going to stay consistent throughout the job and all of the other future jobs. That does make a big difference.”

For Wingers Cabinets, the move — also partly prompted by an expiring lease at its old location — turned out to be good timing. According to Doyle, “it was time to renew or move on. We were able to expand at the same time, and with larger shop we were able to look at some of the other machines that take up floor space. Definitely the automated finishing line was something that the larger building could accommodate.”

Automated spraying lines provide more advantages than just throughput, but also allow for different solutions to be applied, Muskoka Cabinet found. “When we made the move back in 2004 they had come out with water based topcoats in flooring,” says Elias. “You could buy it at Home Depot in a can, but there wasn’t a lot of water-based stain application going on. People could still get into water-based topcoat with a solvent- based wiping stain.”

These processes could be performed on a flat line at the time, but that wasn’t the concern driving Muskoka Cabinet. The company also realized that it took a lot of time to rack and dry products. “When product was drying, and dust fell on it, that would be a problem,” says Elias, “and UV topcoats cure instantly. As soon as it comes off the line you can put it on the cabinet and ship it out. There is water-based stain, then water-based top coats, and then UV water-based topcoats.

“Ultra violet topcoats sped up the process enormously. You could go from start to finish on the cabinet and out the door in a fraction of the time it would take to hand spray, hand wipe, dry, spray again, dry, spray again and air dry. So there would be considerable time with each step.”

WHEN A SHOP isn’t large enough to justify any in-house spraying operations, there are outsourcing options, including finding other shops with excess capacity. Rowntree Custom Millwork is one shop that receives outside spraying jobs. “We have the capacity now to accept overflow work or outsourcing from other clients that can’t handle the workload that they have,” says Stanghieri. “It’s been growing a lot in the last couple of years as people find out who we are and what we offer.” Rowntree has had an automated line for about four years and immediately had about 15 to 20 percent of its spraying operations occupied by outside shops. “The numbers have been growing exponentially the last couple of years.” The company does not have salesmen to push the service, relying on referrals and word of mouth.

“It has the possibility to grow into its own company, but it’s not something that we are going to be considering for the next three to five years,” says Stanghieri.

However, there could be problems when unpainted millwork, furniture or cabinets go out the door to any third party spraying operation. Material handling, colour matching and consistency — quality, in other words — become an issue.

According to Elias, “the investment in the materials (to automate) is substantial. You are looking at one million bucks.” While his company doesn’t take in outside jobs, Elias “definitely” sees the merit in farming out work if a shop doesn’t have the equipment. “Not only is there the investment in the equipment, but there is a big learning curve in getting an automated system up and running.”

IF THE STANDARD operating procedure for a shop is to have the panels finished elsewhere, the product has to be protected in transit, according to Elias. “There are all kinds of things you can do, such as design-in reusable containers that have padding inside with slots in order to ship them back and forth to your finishing partner. That’s what I would do to cut down on packaging and damage.”

Stanghieri says that unless you have volume business to justify robotic spraying operations in addition to a flatline system, “having a manual spray booth is always going to be essential to every woodworking business. When you are doing things like surrounds and complicated things like boxes you can’t put them through a spray line.”

For Wingers Cabinets, taking on outside work “isn’t something that comes up,” says Doyle. “We have the volume in our own sales and in our own work that we can keep that machine, as well as our three booths, running ten hours a day.”

However, with only three months-worth of a fully-automated line under the company’s belt, there could be an opportunity, Doyle concedes. There has definitely been a learning curve for Wingers, he adds. “It seems like it was the right way to go and it does seem like going from one booth to two booths to three booths was the logical answer — to add booths and look at automation just seemed to be the right path for us. It’s been a lot of fun but with its own challenges.”