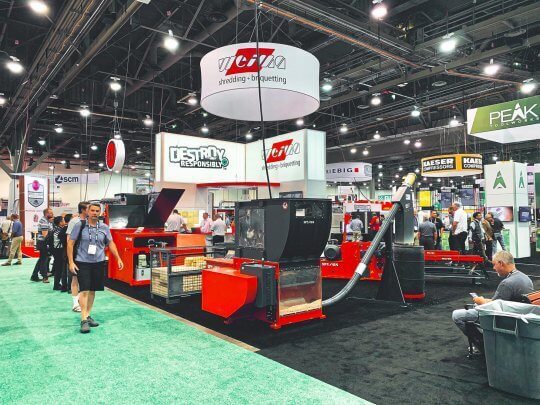 The trade show industry was hard hit during this pandemic. After a long year of waiting and hoping, the trade show world is waking up renewed and optimistic. The Association of Woodworking & Furnishings Suppliers® (AWFS®) will be one of the first to see a WEIMA exhibit in over a year. The WEIMA team is eager to hit the road after a long hiatus, which many in the woodworking industry share.

WEIMA is returning to the AWFS® Fair in Las Vegas with the Destroy Responsibly™ program in tow. The recycling initiative has become a show tradition with purpose: to divert the wood scrap created on the show floor from the landfill.

“The reinvention of scrap is what WEIMA is all about! Shredding this wood waste on the spot gives show-goers an opportunity to think critically and creatively about the scrap they create in their own shops and how it can be reimagined,” says Audrey Brewer, North American marketing manager.

Machinery demonstrations on the trade show floor inevitably create scrap, just like the machines would in a shop. This wood waste is collected throughout the show by Freeman Co. and delivered to the Destroy Responsibly™ tent behind the exhibit hall. All exhibitors and attendees are welcome and encouraged to venture out and watch the wood-waste shredding process in action.

The wood scrap is sorted so that solid wood waste is shredded separately from particleboard, MDF, plywood, and other types of wood with binding agents or chemical treatments. This is done with one intention — to repurpose the shredded solid wood and divert it from the landfill.

With the assistance of the non-profit organization Repurpose America, the solid wood chips are donated to the University of Nevada at Las Vegas for use as ground cover around campus. Any unused wood chips will be composted for use later in the year by the grounds team.

The AWFS® Fair will be held July 20 to 23, 2021, in Las Vegas, Nevada. The show will take place in the brand new West Hall at the Las Vegas Convention Center.

WEIMA shredding and briquetting equipment will also be on display at booth #1447. A bright green-carpeted path within the trade show hall will lead directly to the shredding system.

The machine will be running steadily throughout show hours, and all in attendance are encouraged to come back and see it in action. The Destroy Responsibly™ shredding location will be marked on show floor-plan maps for easy navigation.

The Arbour at George Brown College