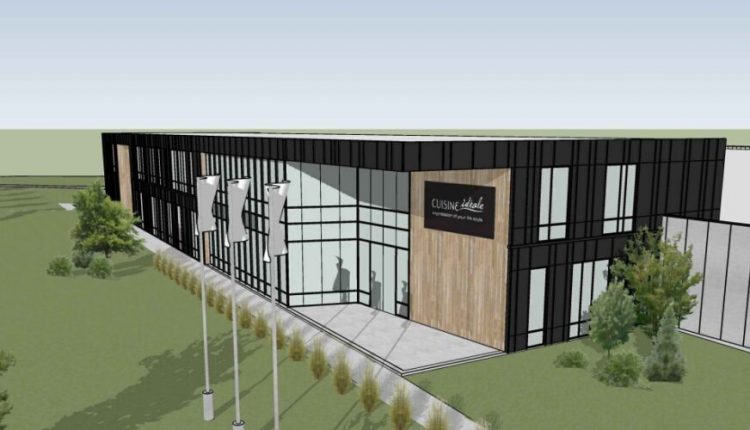 A vacant lot on Robert-Boyd Street in Sherbrooke was recently purchased by Cuisine Idéale, a well-known Canadian cabinet manufacturer, to build a new industrial plant. The company, which has just celebrated its 50th anniversary, already operates four manufacturing sites: it now wants to centralize its headquarters operations with the Robert-Boyd Street project.

Now that the land is acquired, work will begin this fall to be completed in 2023. The $25M project will include constructing a two-storey industrial facility of more than 170,000 square feet that will hold the organization’s administrative offices and three complete production lines. This brand new and eco-friendly building will offer several amenities for its employees such as a full gym, an option between different kinds of breakrooms, a state-of-the-art cafeteria, and air conditioning.

“We’ve been thinking about building a new headquarters for a while now. We are really excited to have taken the first step!” explains Jean-Bernard Gagnon, vice-president of the company. The company also wants to increase the number of specialized positions and continue its progress in 4.0 manufacturing.

Cuisine Idéale’s initiative is in step with its core value of offering a great work atmosphere to its entire team. Indeed, “we really want to focus on the working environment quality with this new site,” adds Mr. Gagnon. “Our first plant is becoming more and more obsolete, restricting, and with the growth we are currently experiencing, new space is needed.” With the pandemic and its effects on psychological health, the company sees that announcing a move into a larger and completely new industrial complex will boost everyone’s morale.

The resurgence of the market drives all these changes. Cuisine Idéale works as much in Canada as in the United States, where demand is quite strong. According to data from the National Kitchen and Bath Association (NKBA), consumers are willing to combine several renovation projects with more high-end products than lower-end products because they have saved during the quarantine.

“With its major expansion and consolidation project, Cuisine Idéale will accelerate its transition to Industry 4.0, already started a few years ago. Therefore, gaining in productivity and competitiveness in a highly competitive market. The family business is an inspiring example of sustainability in the Sherbrooke manufacturing sector,” said Nathalie Prince, Director – Business Services for the Advanced Manufacturing key sector at Sherbrooke Innopole.

Cuisine Idéale would like to thank its entire team, its partners, the City of Sherbrooke and Sherbrooke Innopole for their continued support throughout this project.

The CCDA Award for Excellence in Apprenticeship Education

Back for another round: Spindle Repair 101