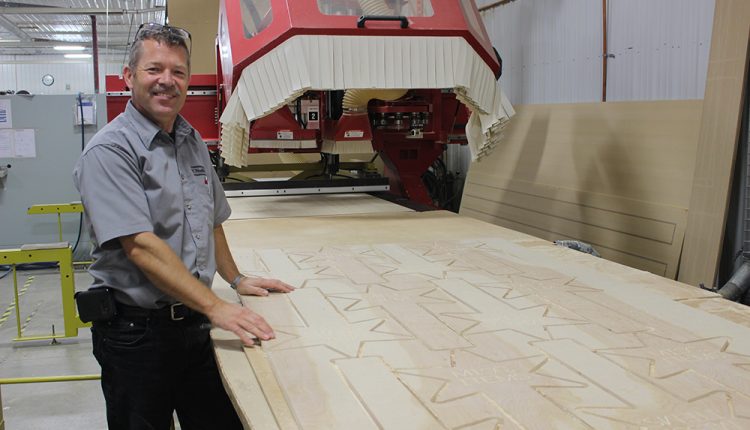 The weather may be warm now, but in that autumn snowstorm on a dark, early morning, an iffy GPS has led to me into the wrong driveway, but luckily my destination is just next door. The sign for F.C. WoodWorks is visible through the frosty windshield, even if the iPhone is telling me to drive further away.

Rick Mostert, president, of the Winnipeg, Man.-based custom cabinet and millwork shop answers the door and welcomes me in. We can’t talk yet, because a contractor rings just as we sit down.

The impression I get eavesdropping one side of the conversation is confirmed by Mostert. “We’re dealing with a lot of components in a building on this project,” he says. “Not just cabinets, but wall paneling, elevator corridors. I’ve got a meeting in a couple of hours with the ownership group and the contractor.”

Working with contractors more often than not, F.C. WoodWorks is often in consultation on multi-million-dollar projects. With 30 years of experience, Mostert’s skills as an estimator are always being tested. “We’re trying to figure out how we’re going to do this. How we’re going to pare it down a little bit and we have some pretty good ideas. There is a lot at stake here — we’re talking millions of dollars in one project. It’s considered over budget, so now you have to do budget engineering, which is always a challenge.” 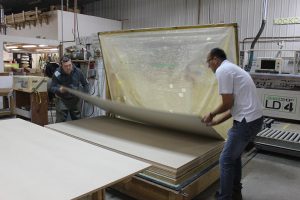 Mostert and his company come from humble beginnings, as many small businesses do, and confesses he knew nothing about millwork at the beginning. “I was in the construction industry and did a lot of framing and house renovations when I was a kid. When I was 21, I moved up to interior finishing like casings, doors and mouldings,” Mostert says.

Not impressed by the fellow he was working for, “I decided it wasn’t the life for me. “My father-in-law ran a fruit and vegetable store called Vick’s Fruit Market. He got me a job at the wholesaler where he bought a lot of his stuff. They needed a driver to deliver to the restaurants, cafeterias and hotels.”

After a couple of years, Mostert started to teach himself cabinetry on the side and studied the hardcover series of Fine Woodworking magazine available in the late 1980s and early 1990s. He worked in the neighbour’s garage that had a gravel floor. “The old story, right? It was an old lady’s who never used it, so I put a wood stove in there and that was my heat. I started building displays for my father-in-law’s store.”

Mostert started handing out his business cards to all of the customers he encountered while he was still making deliveries. One commission piece was for a chef, he recalls. “It was almost like a briefcase — multiple levels where he put all of his knives in. I carved his name in there.” Little projects like that one, then a kitchen or a bookshelf, kept Mostert going as he got his cabinetry “side-business” started. “That was when my wife and I were in our first home where we had children. Then we moved to a home that was a little bigger and had a big yard.”

This property also had a small, single- car garage which he was able to sell to clear space. “A guy came in with a semi-trailer,” Mostert says, “jacked it up and hauled it away. I built my first shop there. That was just under a thousand square feet. It was bigger than my house at that time.”

Mostert purchased a small CNC boring machine in 1988 and later, in 2007, acquired a large nesting machine. He would be working in the shop at nights and weekends, with a typical first delivery call at 5 a.m. He would do his hospitality run and be home around 3 or 4 o’clock. “I’d have something to eat and go into the shop until 11 at night. I did that for two years.” 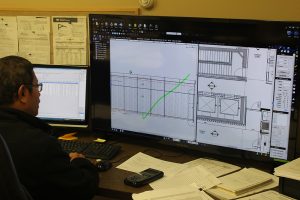 Suddenly the drivers at the company he was working at decided to go union. “I said, ‘that’s it, I’m out of here.” Mostert started working on his own full time and soon he was so busy even the 1,000 sq. ft. shop was too small. The decision for F.C. WoodWorks to go commercial in 1993 and for Mostert to build a proper, 3,000 sq. ft. shop on his own proved to be problematic.

“I built everything myself except for electrical. I ended up killing my business because I was too busy building my shop.

“My father-in-law gave me a bit of money to get me started there. At the time, I helped a big construction firm on a project the millworker had gone bankrupt on — through the bond I helped him.”

Initially, F.C. WoodWorks did a combination of residential and commercial projecs and hired its first employee in 1994. “From there we kind of grew by one employee per year,” says Mostert. “We’re at 20 now and I don’t know that I want to grow a lot bigger. It is definitely a handson business.”

For F.C. WoodWorks to be successful, there is a never-ending education process between his company, contractors, vendors, architects and clients, according to Mostert. He begins by noting that contractors need to learn more about who their customer is, so his shop can respond appropriately. “What quality level are they going to go to? What would he consider acceptable or allowable and what is he willing to spend? Often what we get is that they want to design a Taj Mahal to get their name on it, but the owner is saying I can’t afford that.”

When the owner of a project can’t pay for it, “we’re in trouble.” So, Mostert tries to see what his company can do to bring down costs. “It’s a lot of work.”

When a project is valued at anywhere from $1 to $4 million, it takes three weeks to bid, according to Mostert.

“Then you have another week or two of paring it down to bring it under budget. We go in there and we talk about value then.

“Sure, we can bring things down to a level, but do you want to bring it down step to another level and the value is not there?”

Mostert distinguishes between the owner-based residential condominium market and the rental market. 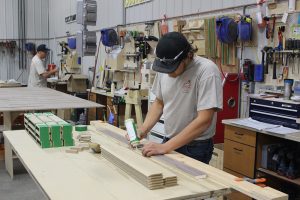 “You go to rental and that’s a different world. You don’t own it, so you don’t care. Now it has to be stronger, tougher, better.” As a member of AWMAC (Architectural Woodwork Manufacturers Association of Canada), “we provide a commercial build cabinet that can withstand that abuse. Of course, it costs more. Now it’s up to me to try and educate the owner and show the differences and why there are differences. I can guarantee you my cabinets will last 5, 10, 15, 20 years.”

Mostert knows that the company has repeat customers that have come back to him because of helping the owner make a smart decision. “You can go cheaper but it’s going to be cheaper quality.”

Mostert uses the example of a large office building his company worked on. “We show up there with all of the millwork and we take our measurements and humidity is 65 percent.

“We said, ‘Sorry we can’t install our millwork.’ You know how that goes, right? The contractor is like ‘What? I’ve got a deadline.’ I said, ‘I can help you — but sign here.’” 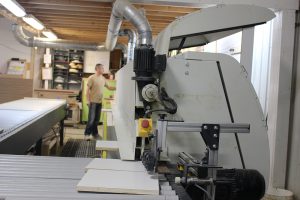 The humidity was reduced to 45 percent, but it put the project three weeks behind. “But now we know our product is in the right environment. We’re not going to get a phone call in three months when the Winnipeg dry comes in and sucks the moisture out of the building and everything starts falling apart. We condition our millwork to the environment three days prior to installation, because every building environment is different.”

The Guaranteed Inspection Service (GIS) arms-length program through AWMAC, where work is inspected by an independent inspector, can provide peace of mind for builders, according to Mostert. “Yeah, you’re going to pay maybe 1 percent more. But you’re getting a shop training inspection, a prototype inspection and a final inspection.

“What we see when a GIS is specified is that the bids are within 5 percent as opposed to 20 percent or more. A big difference because they know they can’t cheat you.”
The AWMAC website spells out what a GIS agreement means in writing: The Guarantee will cover replacing, reworking and/or refinishing to make good any defects in architectural woodwork due to faulty workmanship or defective materials supplied by the Manufacturer, which appear during the two-year period following the date of substantial completion. 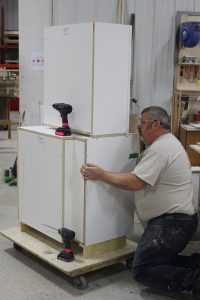 Mostert notes that defects most often appear during this time frame. “Plus, the nice thing with GIS is that now the owner gets a national guarantee,” he says.

“So now if I go out of business and something goes wrong, the (AWMAC) chapter has to pay for it. If the chapter can’t pay for it, then national pays for it. So, the owner is covered.”

When confronted with the prospect of competing with the Ikeas of the world, Mostert understands that generational differences are in play. “Our generation has that better philosophy. What is this new generation thinking? Maybe we need to adjust our thinking.

“I don’t know if I can dumb this down and go that route. It’s not what we’re about. We’re about quality, integrity, service, craftsmanship. Our business card even says so. Our reputation is as such as well. I guess you may have to consider that you’re more and more a niche market. It is what it is.”

Graphic strides: What you see is what you get

The Canadian Aesthetic: Fun and High-Performing