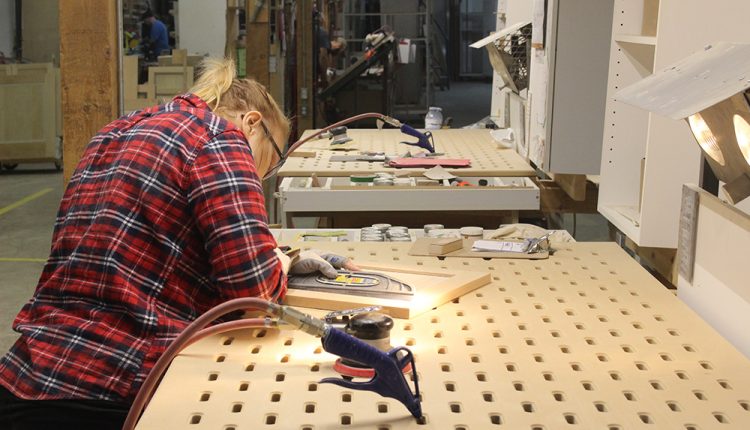 Glenwood: Personality and a plan

“THEY SAY THE KITCHEN IS THE HEART OF THE HOME,” the slogan goes,
“we give it personality.”

Glenwood Kitchen in Shediac, N.B., takes its slogan further to say it provides “kitchens with personality.”

Robert Belliveau, general manager at Glenwood Kitchen notes that the original business started by his father and uncle, Armand and Emil Belliveau, didn’t get its start manufacturing cabinets for the heart of the home. The company began in 1973 in the building supply business. “They were bringing in kitchen cabinets from the U.S. on rail cars,” says Belliveau, “and were selling those.”

When Canadian currency began to drop against the U.S. dollar in 1978, management decided to start manufacturing cabinets to control costs. “It took off from there, beginning with a few employees,” says Belliveau. “Nine expansions and 100-plus employees later, this is where we are today.”

The brother founders sold Glenwood Kitchen to the McKenna family in 2002, according to Belliveau, with James McKenna now the owner.

“Growing up, it was important for my father that when I went to school, I worked a little bit in the plant,” says Belliveau.

“I worked in basically every department in the plant to understand the whole manufacturing process before I was moved up to the office. In management, it is hard to manage when you don’t know what you’re managing!”

So, Belliveau spent all his summers learning the ropes in different departments. “Once I got out of school,” he says, “I worked a bit more in the plant and then I moved up into the office to learn that part of the business, and then moved into management. When I finished high school, I went through a lot of night courses for accounting, computers and business. Basically, this is where my schooling came from.”

Glenwood Kitchen products are distributed throughout the Maritimes, the New England and New York states, Alberta, Saint-Pierre and Miquelon, and Bermuda. To support its dealer network and to maintain quality for consumers, Belliveau had to put on his learning cap once more.

“Five years ago, we hired a consulting company to help us out with lean manufacturing,” says Belliveau. “We realized it was going to take about that long before we could get through all of the plant. We are at year four of the implementation and there are still some changes to do — continuous improvement never stops.”

The lean path has been very good for Glenwood Kitchen, according to Belliveau. “The people we were working with were excellent; they got on the floor and they put their elbows in, in the sense that they worked with the people and helped them.

“Lean is not what these guys knew (about building cabinets), but they helped bring the best out of the employees. It helped them to be creative. We honestly think and know that the people who don’t go through these processes aren’t going to be in business long — unless they are really smart and figured it all out themselves.”

The changes in markets and manufacturing today are happening faster and faster, he notes, and companies need to learn to adapt. “You’ve got to have a change champion, someone assigned to look at that,” says Belliveau.

“When you have a change champion, you will always look at the process. If not, workers have a tendency to go back to the old habits, so you have got to pull them back in.

“As soon as you get busy, or not as busy, you tend to always want
to go back to the old habits.”

“Our retailers are the ones who meet with the architects and the engineers or the interior decorators. They work on the drawings and everything gets sent to us and we build to those specs. Trends and designs change, but Maritimers are maybe slower to react than some places.”

“In general, we can keep up with any changes we think are coming,” he adds, “but sometimes we don’t want to be the first ones in the market. But if we see that the trend is starting to get hot, we do have it for the end user. We definitely try to keep up with the quality over and above the standard, let’s say.”

Beyond its retailer network, Glenwood also sells to a few manufactured (modular) home companies that represent close to 20 percent of its business. Belliveau explains that sales are fairly constant throughout the year, with January, February and March being the slowest months.

“In September, October, November you are a little busier,” says Belliveau. “Everyone starts new construction around here when the frost gets out of the ground.”

With a staff of 115, Glenwood has many different skill levels to bring to the floor, according to Belliveau. He has noticed the positive working environment there has led to a high retention rate.

“There are people here that have been with us for a long, long time,” he says. “We have a lot of family members. In one case, there are three generations with four sisters, three brothers, fathers, children. That tells you a lot.”

The company is fairly automated, in Belliveau’s estimation, and there is always more to be automated.

“All of our machines that can, have a return conveyor on it. But there are some things where automation just doesn’t cut it. For example, there is certain hand sanding that automation doesn’t accomplish what we are looking for in quality.”

Belliveau admits that it is difficult to replace people depending on the skill level for a given application. “If it’s a sprayer you are looking for or if it is a custom craftsman who is more than capable with his hands to do these custom things that no machine can do, it is hard.”

A local college has provided Glenwood a few workers over the years, but the wood program shut down at one point and that source evaporated. Belliveau believes the program is supposed to restart next year and is encouraged to see that stream open up again.

In the last year the company has added to its skill set from foreign workers who have come to the area, in particular from the Philippines and from Brazil. “We also get some people from British Columbia coming down here because the way of life there is just too expensive, especially real estate.”

Belliveau thinks it is important to look out for the environment, beyond what lean practices do for the bottom line. “We are managing our offcuts through an inventory management software system called Cut Right. It cuts down our waste and is definitely worth the investment. Everything is connected and all programming for the CNCs is done upstairs through software such as 2020 for design and manufacturing.

The company is also in the process of implementing imos, specialist software for the furniture and interiors industry. The CAD/CAM software component of Imos aids design, manufacturing and distribution processes, but the Imos platform also combines multiple processes, including online E-commerce, design and analysis, automation of production facilities, and the integration of existing IT solutions.

“Our vision is to get a little more automated every year,” says Belliveau. “We are always trying to look at the ten-year plan to see what the next move is going to do to affect the move after that.

“We want to bring in more machinery but also look at the processes and see if we can change without involving machinery. That is where lean comes in.”