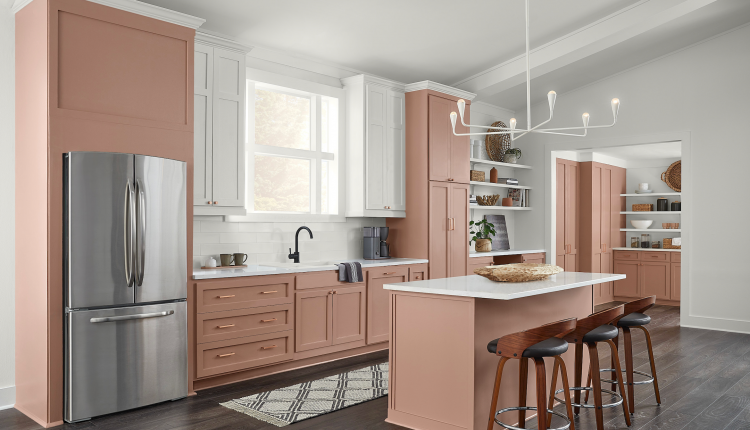 One of the things I look forward to in fall (other than the leaves changing colour) is finding out the on-trend hues for the coming year. Almost all the major paint manufacturers reveal their predictions for what will be in style and, resultantly, shape the residential market. Here’s a breakdown of five companies’ choice for colour of the year and supporting palette that encapsulates the current climate. The overarching theme (for the most part) is it’s time for neutrals to move over – colour is going to have a moment.

Beloved paint brand Benjamin Moore has chosen a show-stopping red-orange, Raspberry Blush, that is sure to enliven any surrounding. The coral-tinged vivacious colour is unapologetic in its boldness as it encourages a confident colour statement. The company cites people’s desire to bring colour back into the home and step outside their comfort zone to express themselves for the selection. The rest of the palette includes a range of saturated tones varying from a deep, inky blue to a sultry teal, to more rich chocolate and cinnamon hues.

Similar to Benjamin Moore, Sherwin-Williams’ pick has a pink undertone but where the two paints differ is in their intensity. Redend Point (image 1) is a calming blush-beige that delivers enveloping warmth that instantly makes you feel at home. A modern twist on mauve, the soft blushing beige is supported by other red undertone colours in the palette, including Hushed Auburn, Carnelian and Malted Milk. 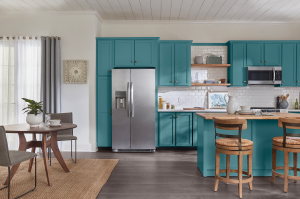 The company behind popular paint brands Dulux and Glidden earmarked red’s complementary colour as the go-to – the second consecutive year it has pegged a shade of green reflecting its continued global dominance (image 2). Compared to last year’s choice, Olive Sprig, which is a desaturated soft green, 2023’s Vining Ivy is a striking jewel-toned hue that lands between a woodsy forest green and a blue-green teal. Vining Ivy pairs well with the 45 coordinating colours in the palette, which is dominated by sea, stone, mineral and soil tones.

Sico
Also a PPG brand, Sico unsurprisingly went with a blue-green hue, too, albeit a different paint colour. Robust and refined, with an energizing yet grounding vibe, Melt Water intertwines bold blue and calming green to create a captivating colour symbolic of deep water. Paired together, these two undertones create an ultra-rich, uber-trendy colour that blends well with contemporary designs or adds an elegant pop to traditional decor. Among the other hues unveiled by Sico are an equally striking deep greenish-gray, forest green, muted terracotta and coppery brown.

Bucking the colour trend is Behr whose Blank Canvas nabbed the paint company’s top spot in its forecast. Offering just what the name implies, a blank slate, the welcoming warm white serves as a foundation for an array of decor styles. This white easily harmonizes with a wide range of hues, including neutrals, earth tones and pastels, pairs beautifully with black for a dramatic impact as well as with bright accents like green or cobalt blue.

Clare Tattersall is an interior designer and decorator in Toronto, and the editor of Canada’s floor covering magazine, Coverings.