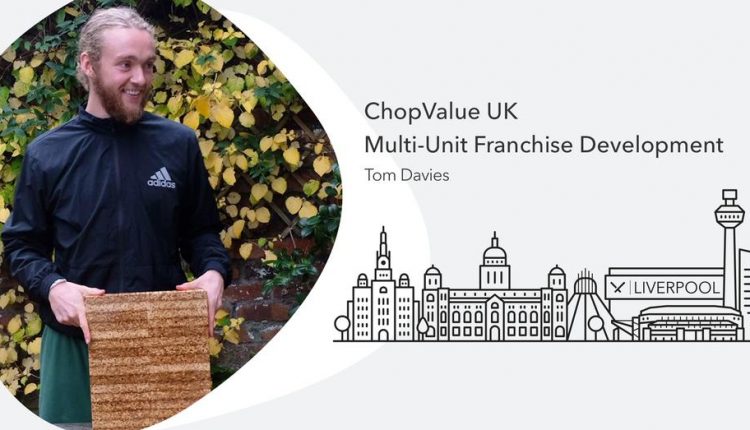 ChopValue, the world’s first circular economy franchise that manufactures sustainable solutions engineered from recycled chopsticks, recently announced a multi-unit development deal for the United Kingdom. The Vancouver-based company’s first master franchise in Europe fuels the next step in ChopValue’s international footprint following the recent announcements of their US and Asia Microfactory locations.

ChopValue UK will be brought to life with the local vision of Tom Davies, the youngest player in Everton FC’s history to captain the team. Football may have put Davies in the spotlight, but it has always been important for him to transcend his image as an athlete by using his platform to advocate on additional topics that matter to him. Growing up, he noticed and became frustrated about the amount of waste around him, eventually becoming a deep-seated desire to be part of the solution. Davies began to study the topic more seriously and came across the concept of a circular economy, which led him to discover ChopValue and meet the company’s founder and CEO, Felix Böck. Davies and Böck clicked instantly with their shared goals of developing solutions for the excessive waste in society. They exchanged ideas, Böck learned about the potential of ChopValue in the UK, and Davies went home with a plan and a ChopValue cutting board (which notably passed his mom’s “red beet stain test”). Having confidence in the innovative engineered material and its solution, Davies was inspired to bring ChopValue’s Microfactory concept to the UK.

“People feel they can’t make an impact as an individual, but I want to change this belief,” says Davies. “With ChopValue, we’re making it simple to educate consumers on the tangible difference we can create together. The UK is a relatively small island with significant landfill issues, which means diverting waste is an important first step. Recycled products are more than just a solution to one of the world’s top environmental problems; they provide a sustainable future in a world with a growing population but limited natural resources. To me, the circular concept of ChopValue showcases how we meet the current needs of our population without compromising the ability to do the same for future generations.” Davies’s sentiment aligns with the pledge from 100+ leaders at the COP26 to end deforestation by 2030 and ChopValue’s solution to wooden products without cutting down a single tree.

ChopValue UK will be a Community Interest Company, developing multiple locations around the UK and Ireland in the next several years. Davies is eager to open the initial Microfactory in his hometown of Liverpool to serve as the flagship location and his commitment to educating others about closing the loop, which is of great importance to him. This Microfactory also aligns with his motivation to give back to his community by creating employment opportunities and donating funds to causes that address critical issues within the city.

“Listening to Tom speak about his very own interpretation of ChopValue’s concept, I was inspired by his dedication to making a difference in his community and what it would mean for him to bring the expansion as CIC to the UK,” said Böck. “It’s powerful to see natural leaders like Tom gearing up to influence change towards a circular economy as the new norm. I am excited to work with him and his team to lead by example, changing the way we think about waste as wasted resources in the most simple way: one chopstick at a time.”

ChopValue UK’s expansion will empower communities and enable small business owners to be part of the positive impact. Their first location will open in early 2022, laying the foundation for a circular economy movement.

The World Economic Forum forecasts the circular economy to be a $4.5 trillion industry by 2030. ChopValue is the world’s first circular economy franchise, designing and manufacturing products using an innovative, high-performance material engineered entirely from recycled chopsticks. Since its founding in 2016, ChopValue’s “urban harvesting” approach has saved over 38 million chopsticks from landfills, turning them into beautiful and sustainable products for the home and office. Their compelling vision to redefine the term “waste” to “resource” has garnered the attention of top-tier media outlets such as Business Insider, BBC, The Guardian, and Forbes.

With ChopValue’s global network of corporate and franchise Microfactories, the company sources, manufactures, distributes, and employs within local communities. They are expanding with like-minded and purpose-driven partners to redefine waste to resource, one chopstick at a time. ChopValue is actively seeking single and multi-unit franchise development partners who want to lead the change in their community within the US states of CA, FL, HI, NY and TX. The international expansion opportunities for their first-of-its-kind circular concept includes Australia, EU, MENA region, Japan, Korea, Taiwan, Hong Kong, and the SEA region.