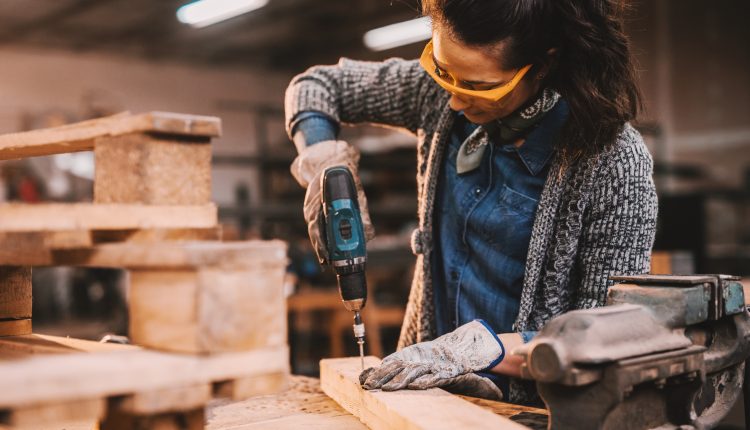 Change is not easy. And women entering the male-dominated manufacturing and construction industries know that better than most. Women are still facing systemic barriers to successful careers, representing only 4.5% of the skilled trades, and that number has barely changed in decades.

Women and Indigenous people are leaving the industry because they face discrimination or racism, said Irene Kerr during a BC Centre for Women in the Trades’ Women Build BC conference.

The president and CEO of BC Infrastructure Benefits Inc. was one of several speakers on an industry panel exploring challenges and best practices for recruiting and retaining women in the skilled trades.

“We’ve developed a program aimed at taking action against discrimination and racism on the jobsite, and to foster a more respectful work culture,” said Kerr. “We call the program respectful onsite initiative. The acronym ROI is intentional because we need to invest in people if we’re going to have a chance at change.”

The crown corporation also has a priority hiring policy and site representatives – all tools used to assist, increase and sustain diversity on job sites.

“Never before has a union accepted within their collective agreement a priority hire mechanism – it’s unheard of, but they’re doing so. That tells me their leadership knows that it’s time for a change,” she said, noting out of the 205 employees they’ve deployed on current public infrastructure projects, 15-23% are women.

Catherine Roome, president and lead executive officer at Technical Safety BC, shared good examples of how implementing diversity policies is not always enough and require follow-up to ensure they are being carried out on the ground.

“Change is hard even when you’re leading an organization and trying to create these pathways to ensure we have talented people move into the organization,” she said. “I think part of our responsibility as leaders is to keep checking that they are working and having the impact that we want.”

With the demand for skilled labour at an all-time high, there is a critical need for the industry to move forward collectively in meaningful ways to increase the number of women and other under-represented groups.

“It’s the challenge of change. It’s not easy. Along the way, there’s resistance, and there are misconceptions that need to be overcome,” said Kerr. “The other thing is everybody wants to see immediate results. But I think we have to recognize it’s a journey. It’s a marathon, not a sprint. We have to be very deliberate with our commitment.”

The pandemic has also raised challenges with disproportionately working women, causing what economists call the “she-cession.” Various labour reports show the number of women employed has declined significantly compared to men in the last year.

“The pandemic has really enabled a new look at innovative practices about supporting people but also painted a stark picture about the [gender] gap and how much it’s widening in certain communities,” said Roome. “The pandemic [has] obviously adversely affected women, people of colour far more than any other demographic.”

Role models, diversity training, and mentoring opportunities were all cited as ways forward. Roome advised that women need to look for partners and allies and speak up (text, call, email) when they encounter barriers or obstacles.

Kerr agreed, stressing: “you have people who want to break through the walls with you.”

Driving change also means having the right company culture, which comes from the top, and leaders must be “relentless in having the will to change the culture.”

“We need to make inclusion a priority,” stated Kerr. “We’re very quick to invest in technologies and materials, and we should advance the business. But we also need to invest in the people and have the patience to stay with the effort and watch it pay back.”

A psychologically safe workplace begins with a feeling of belonging, and language plays an essential role in signaling an organization’s openness to diversity and inclusion.

“Do we call it ‘manpower’ or ‘workforce’ or ‘team’? A lot of times, people don’t see themselves in an organization if the language doesn’t resonate with them,” said Rebecca Kragnes, Indigenous business relations manager at Bird Construction.

Kragnes cited safety as an example of what the industry is capable of achieving if the commitment is there, which can be similarly applied to recruiting women.

“So twenty-five years ago, safety was new and a challenge to implement all the safety protocols on our sites. We should be taking the same efforts and focus on supporting diversity and inclusion as we do on safety. If we committed to that in the same way we’ve committed to safety in 20 years, we would be at 50% [women in construction],” she says.

Kerr expressed her optimism by saying: “If one woman – tradesperson – brings along another woman, then so on, that would change the look of the trades…and give a woman a meaningful and lucrative career. To me, that is the human legacy of construction and what we’re trying to do. We have to be deliberate about change and stay with it.”