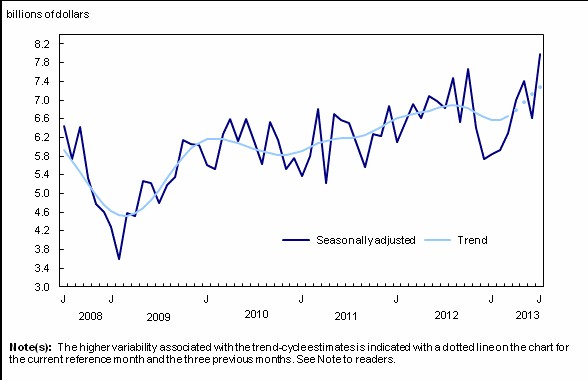 According to Statistics Canada, contractors took out building permits worth $8.0 billion in July, up 20.7 percent from June. The total value of building permits continued to trend upward on the strength of six gains in seven months.

The increase in July came mainly from higher construction intentions for commercial buildings in Ontario, Alberta and Quebec.

In the non-residential sector, the total value of building permits rose 45.5 percent to $3.9 billion in July. Ontario, Quebec and Alberta accounted for most of the increase. Decreases were recorded in four provinces, led by New Brunswick.

Following a 12.8 percent decline in June, the total value of permits in the residential sector increased 4.1 percent to $4.1 billion in July. The value of residential building permits was up in five provinces, led largely by Quebec, followed by Alberta and Ontario. British Columbia, Saskatchewan and Nova Scotia accounted for most of the declines in July.