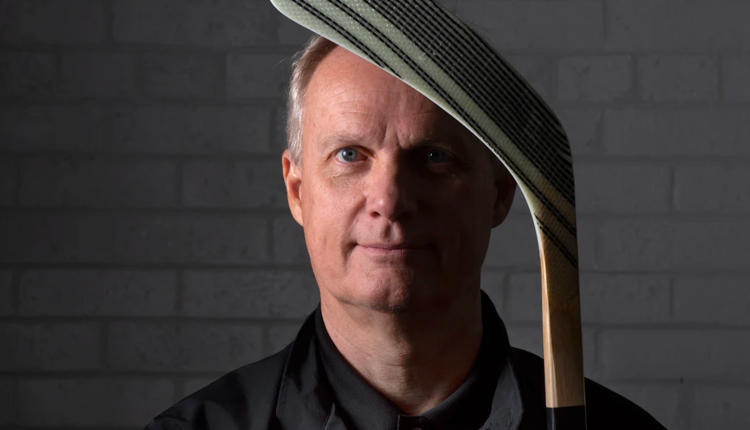 It’s been 133 years and Heritage Hockey Sticks, a company whose beginnings date back to 30 years before the National Hockey League (NHL), is still making its wooden hockey sticks in its bid to keep Canada’s national sport affordable. 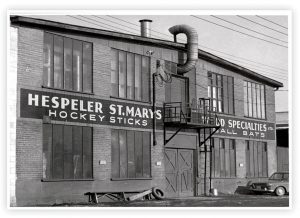 The company’s original plant in the former southern Ontario town of Hespeler was one of Canada’s oldest continuous manufacturing operations manufactured this sports equipment from 1887 to 2021.

The company, which is still in business today, was formed when stick manufacturers from several southwestern Ontario communities pooled their knowledge and began to work together in the same building in Hespeler during the 1930s.

Fast forward almost three-quarters of a century – and several changes of ownership under brands like Cooper and Nike Bauer – and the operation becomes an employee-owned business in 2004.

He picks up Heritage Wood Specialties from Mark Fackoury for an undisclosed amount in April, 2019.

A hockey business entrepreneur whose resume includes acquiring Bauer Hockey from Nike in 2008 and a close – but unsuccessful – attempt at buying the Montreal Canadiens in 2009, Roustan adds Heritage to his Christian and Torspo equipment brands.

He also owns The Hockey News, one of the sports’ most popular news outlets.

“I think I’ve touched more pieces of the hockey business than most people I’ve come across,” he has reportedly said.

A fan of the sport from an early age, Roustan tarted playing hockey when he was still only a three-year-old boy in the 1960s.

That passion for hockey transformed his life, leading to later acquire companies in the hockey space through his venture capital firm, Roustan Capital.

“(Heritage Hockey Sticks) is the only factory in Canada that makes hockey sticks,” Roustan reportedly told the Toronto Star.

“What’s  really important from a Canadian heritage point of view is that our game is supported in Canada and that we can make these products in Canada,”

The businessman picked up Heritage Hockey Sticks after realizing in 2008 when he was sitting at the chairman of the board Bauer Hockey that most hockey equipment is now manufactured in Asia.

“And once you lose the trade you can’t get it back.”

The serial entrepreneur is adamant that the skill needed to make quality hockey sticks must be passed down from one generation to the next.

In 2021, the manufacturer of hockey sticks made a big move.

His dad, Walter Gretzky, has been a cornerstone of the Heritage Hockey Sticks plant for decades.

He often visited the factory in Cambridge and would always leave with hockey sticks in hand.
The decision to move the company to Brantford was heavily influenced Roustan’s wish to be close to Walter Gretzky’s home so that the sport’s most well-known dad could visit more often.

But that never happened.

Walter Gretzky unfortunately passed away last year at the age of 82 before the project could be completed.

“We like the history of the building, we like how old the building is and the tradition of making wooden hockey sticks here,” Roustan Hockey’s general manager Bo Crawford reportedly told CTV News. “But, on the other hand, it is old. It’s a little inefficient.”

The 52-year-old woodworker was building kitchen cabinets for a company that went bankrupt and needed to find a new job when he started working at the Cambridge factory.

“It was going to be temporary because I wanted to get back into kitchens,” he said.

Thirty years later, he’s still making hockey sticks. During that time, he’s made them for NHL greats like Eric Lindros and Wendel Clark.

Crawford calls that “the cool factor.”

Heritage Hockey Sticks’ new home on Spalding Drive in Brantford is three times the size of the Cambridge location, with 75,000 square feet of space.

Canadian-made, wooden sticks are more affordable than those made with space-age materials

The move comes on the heels of a deal with Canadian retailing juggernaut Canadian Tire that approached Roustan in 2019 about selling more Canadian made products and then inked a deal with Heritage Hockey Sticks in 2020. 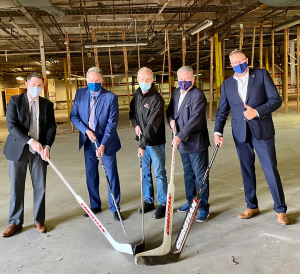 The company’s wooden hockey sticks are made of multi-ply birch or incredibly strong aircraft veneer, often referred by the acronym ACV, rather than the more expensive materials used by most other manufacturers of these products.

Throughout the years, the cost of the game has soared.

Playing elite-level hockey in Toronto, even for children, can cost up to $10,000 per season, with sticks like the CCM Ribcor Trigger 6 Pro, made of nanolite carbon, retailing at about $370.

“If I were starting out to play hockey now, my parents wouldn’t have been able to afford to put me in the sport,” NHLer  “Jumbo Joe Thornton reportedly told The New York Times. “That’s just the reality of it.”

Fighting that elitism and rising costs in the sport with affordable wooden sticks is all part of Roustan’s vision.

“Our mission is to grow the game of hockey through our efforts of making and supplying sticks at price points that are more affordable,” states the Heritage Hockey Sticks website.

With his storied stick brand, factory and hockey magazine Roustan is proud of his company’s made-in-Canada origins.