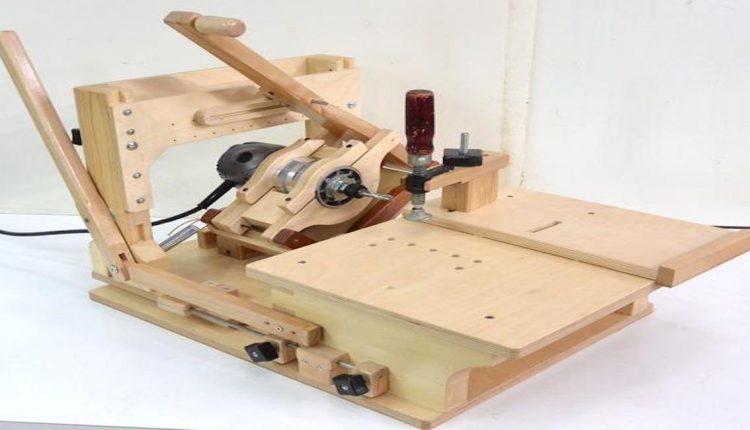 Matthias Wandel is a New Brunswick-based woodworking YouTuber with 1.68 million subscribers. When asked if he describes himself as a craftsman, artist, content creator, or something else, he wasn’t entirely sure of the answer.

What he makes can hardly be described as useless; he makes his own woodworking tools out of wood. He started building machines when he couldn’t find the right tool for the job. Often he’d need to use multiple tools to achieve the result he wanted or finish off some of the details by hand. Sometimes, it’s a matter of modifying existing tools, but other times it requires an outright invention to get the job done.

He grew up working with his father’s European tools, which could easily make mortise and tenon joints. But when he started buying his own equipment, he couldn’t find an equivalent, so he built a tenon jig himself. Over the years, he refined his designs and built more tools.

Despite studying engineering at Waterloo, he’s learned almost entirely by doing, having worked regularly in the shop since he was ten years old. Now he designs and builds tools, quite a feat of engineering beyond what he learned in university. One of his most popular build videos is his Building the Pantorouter video, a condensed version of his nine-part Pantorouter Build Series.

The pantorouter is a precision woodworking machine used for mortise and tenon, simple angle, and compound angle joinery. He can also achieve dovetail and box joints, depending on the template he uses. He makes it look easy, and his explanations are technical enough to satisfy woodworking experts but simple enough for a layperson to understand and enjoy.

Wandel is a YouTube veteran and has been on the site since early 2007. Over the years, his videos have evolved from showcasing his final products in action to breaking down the build process. While his early marble machines are fun to watch, they become even more impressive when the viewer can see the work put into building the tools that build these machines.

When building his tools, Wandel works mainly with 2X4s because it’s much less expensive than hardwood and works just as well if chosen carefully. He also tends toward baltic birch plywood, because he finds it steadier to work with than regular spruce plywood.

Besides his homemade tools, his shop’s most commonly used machines are his table saw and his drill press. He’s tried making a table saw, but ultimately decided nothing beats a cast-iron commercial model. As for the drill press, he explains why this isn’t a good candidate for a project on his website, woodgears.ca.

“The cheapest way to get the parts to build a drill press is to buy a new drill press and take the parts from it,” writes Wandel. “But then, you could just use the drill press as it is. Hand drills are not rigid enough to be suitable, and a quality hand drill that might be suitable will cost more than a cheap small drill press.”

While metal may be the only option for some tools, he’s found that the majority of the time, he can create the tool for the job himself out of wood. He has no interest in buying or building a CNC or using a 3D printer.

“I’ve not yet come across a problem where I can’t solve it with the means I already have,” he writes on his website about this specialized equipment.

Wood was an easy choice in terms of a medium for his work. Not only did he have access to the knowledge and tools through his father, but it’s efficient to use in terms of time and cost. He describes how many of the makable items in his home come from wood, and so it only makes sense.

“It’s a practical material for usable items,” he explains. “I suppose I could learn to blacksmith, but I think the only usable household items I could make would be a knife or a fire poker.”

Most of the things he builds stay in his home; his custom-made tools are not for sale, at least not in the traditional sense. Instead, he has the plans and specs for his tools available for purchase on his website, so while his viewers can’t buy his products, they can buy the instructions to make their own if they’re up for the challenge. He says his real products are his videos and the information on his website.

“My ‘day job’ is editing video, writing for the website, running the website, answering emails. That takes up the bulk of my time, so it’s as if woodworking is just a hobby,” he explains on his FAQ page. “I only spend on average about one day a week in the shop total, and when I’m in the shop, I’m often filming.”

And what can we expect to see from Wandel next? He has a few projects on his tool bench, but is currently putting some time into updating his website.