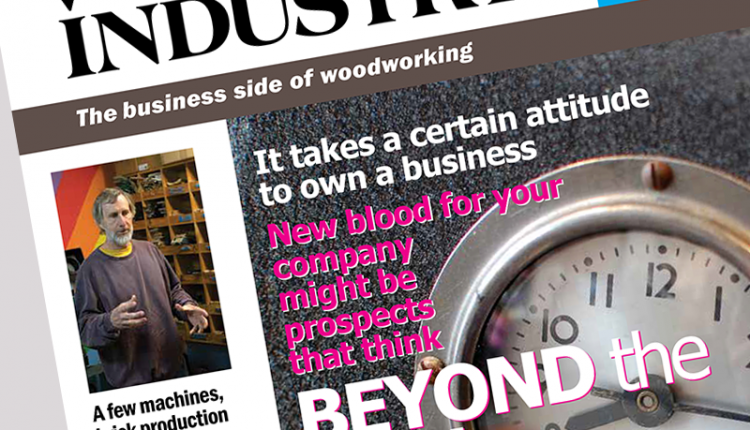 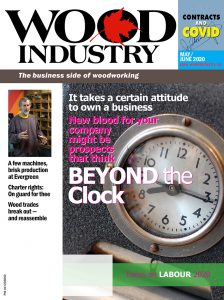 I was present when an assistant editor in our department got promoted to associate, and received oversight of one (1) subordinate. “This is great,” he said! “I have always wanted somebody I could push around.” I remember feeling sorry for the subordinate, and confident the neo-Nero would not last. I was right. Unfortunately, the targeted subordinate did not stay, either. Maybe he’s a business owner out there, somewhere.

Which brings us to you. How has your life been so far? Did you start out in business because you wanted to own a factory in the wood industry? Did you run out of options and decide to invest a few hundred thousand in a trial business? Maybe you wanted flexible hours, or a chance to balance work and family.

According to Statistics Canada, the chances are that you may be the erstwhile subordinate, above, couldn’t take it and your ultimate goal in life became being your own boss. (OK. We all know nobody is his or her own boss, but you know what they’re saying.) Statcan says being your own boss is the top reason for being self-employed, at 34 percent. The second-most cited reason was that the nature of the job requires it — dentists, physicians, farmers — at 15 percent. Way down at the bottom, with only three percent, are the people that are self-employed because of more money and unlimited income. The report goes on to say that in 2018, 2.9 million Canadians were self-employed, up from 1.2 million in 1976.

Business owners want to be their own boss

There is a trick in the StatCan report. The report covers “self-employed Canadians,” and rates being one’s own boss as the top reason for self-employment. However, the word “boss” carries the inference of having people for whom you are responsible and who are accountable to you. Clearly, many forms of self-employment are one-person shows, including dentists, physicians, farmers and so on, so there is a difference between being self-employed and being an employer.

Let’s assume you are not going it alone. Many of our readers are, in fact, one-employee shops, with the one being themselves. Most have more employees than just themselves.

You may be among the ones that are employers so they can push people around. Those employers likely have an unhappy work environment, are under the constant threat of lawsuit and have more difficulty than most in finding and keeping employees. Some might describe them as part of the problem, and a handicap to the industry. 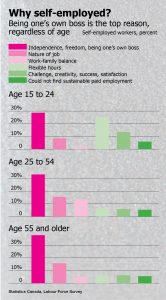 In manufacturing, it is more common to see business owners as employers, although not necessarily. It is quite possible with modern technology to have a one-person production system that rivals much larger shops. However, it is not accurate to analyze manufacturers with the entire group of business owners to get a sense of proportion.

Manufacturing, itself, appears to be on the upswing in Canada, following a long period of steady decline. Everybody accepts that manufacturing has been on the decline since the late 1990s and before. The contributing factors typically cited are offshore competition for orders, but a contributing factor has been domestic competition for work in other sectors, on the one hand, and an unwillingness among young Canadians to do manufacturing work.

The unwillingness of young Canadians to work in manufacturing has been exacerbated by the government, itself, in cutting back on skills-related education in secondary schools and in marketing college programs focused more on their popularity in the media than in a bona fide need in the employment marketplace. Typical examples include an oversupply of graduates in forestry and medtech programs, both the subjects of multiple television fictions, and an undersupply of graduates in “the trades,” which rarely get portrayed as positive.

Without going into an analysis, the suicide rate among men is approximately 300 percent that of women, so we can hypothesize that manufacturing jobs may play a positive role in the health and safety of undereducated men.

Wood Industry has previously discussed the concept of hiring uneducated, underprivileged or disadvantaged people into manufacturing. In short, some of these people are very motivated to get and keep a job, or to turn things around after a series of bad luck. Potential resources include treatments centres, halfway houses, probation offices and such on-line resources as Indeed or Monster, or through your local newspapers.

It is no secret that manufacturing jobs outpace the supply of apparent recruits. The industry created an advisory board in the ‘90s that, in turn, created funding for the University of British Columbia’s Centre for Advanced Wood Processing. However, the output of the programs created there is generally hired by the primary side in B.C.

Many colleges across Canada also have industry-specific programs for secondary wood-products manufacturing, and those graduates are in high demand and command a good salary. However, those are skilled graduates and skilled jobs, and historically the output has been well below industry demand, creating competition for skilled workers in the industry, with virtually no output of rank-and- file workers for the sector.

One often-referred-to potential resource for workers is among Canada’s immigrant populations. However, the immigrant populations divide-out into subcategories with separate demands, capacities and interests. For example, some have a work permit, a study permit or both, some have no pre-admission work experience, some have another type of work permit and some are asylum-seekers. Within each of those categories, each applicant may or may not have previous work experience.

However, among the categories of potential employees, the most desirable candidates have expectations. They came to Canada for a better life. For example, according to Statistics Canada, immigrants’ wages increase in proportion to the years since admission to Canada, and, for some, their wages catch up with those of the overall Canadian population. In one study, the median wage for immigrants admitted in 2007 increased from $20,400 in 2008 to $33,500 in 2017 — and increase of 64 percent.

Another germane fact is that the average age of workers in manufacturing is increasing – a circumstance nobody needs a study to confirm.

Taking it all into consideration, it appears our industry associates continue to drop the ball in terms of marketing. It is possible to identify a target demographic and to inform that demographic about careers in manufacturing. Not everybody needs a university education, and many of those that have one decide not to use it.

Given the nature and volume of our immigrant populations, and given their expectations of a better life in Canada, the lure of being a business owner may be our best card. We already established that very few people seek out self-employment as a road to riches, the desire to be free to make one’s own mistakes trumping that motive dozens of times over.

It’s fair to say there will be an increased demand for Canadian-made wood products in the near- and intermediate- term future. The biggest reason for this may be the lack of ability on the parts of China and the EU to compete in North America, needing to apply resources to repair issues in their own countries.

If you need workers, you may find you are your own best salesman, and you may find your best resources will be your own future partners, and even competitors. You may find them in the want-ads or a co-op, but you may also find them in a halfway house, a church, temple, gurdwara or mosque. Or they may hang out at your city parks. We all started out somewhere.