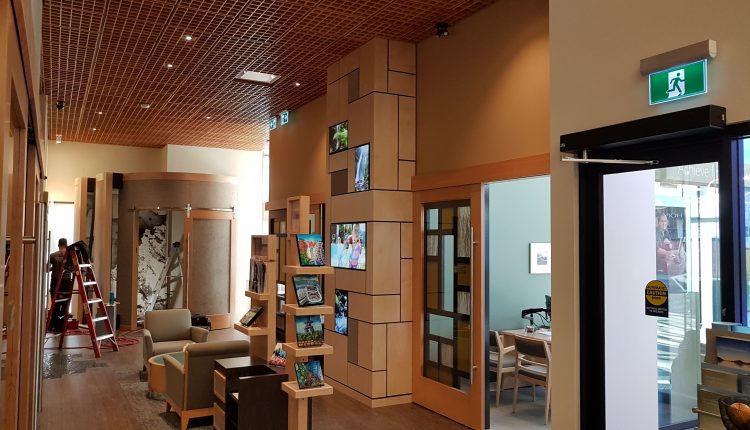 An eye for style and dedication to craftsmanship earned Beckville Woodcrafts top honours at the Architectural Woodwork Manufacturers Association of Canada (AWMAC) BC 30th Awards of Excellence. The millwork company earned the Ed Russell Award for Overall Quality and Service in a Small Commercial Project and Gold Servicer in a Small Commercial Project for its eye-catching work on the BlueShore Financial Spa Pender Branch project. 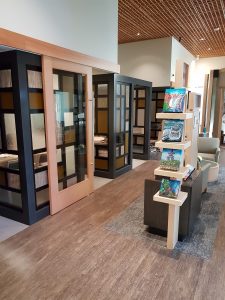 “It’s always amazing to be recognized by your colleagues and peers and to be honoured this way by AWMAC,” says Frank Beck, President of Beckville and former AWMAC president.

Notably, it also included the addition of a curved, 35-foot Mondorian-style “bridge” spanning the ceiling of the high-end commercial space. The expansive feature, which houses the branch’s sprinkler heads and electrical infrastructure, is lined with maple panels and highlighted with backlit onyx.

“That woodworking bridge was one of the biggest challenges,” says Beck. “This is a massive bridge that spans the building that had to be seismically and structurally engineered to hold itself and be fastened to the ceiling, but not to the walls.”

Overall, the project put Beckville Woodscraft’s decades of experience to the test. Nevertheless, Beck says it was a challenge the team is proud to have taken on. 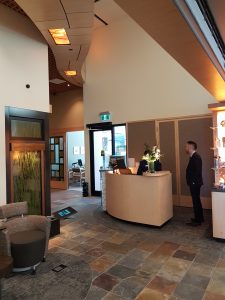 “Proud is an understatement,” he says. “One of the things that I love about our industry and our trade is that we are probably the most visual of any trade. We’re able to walk into spaces like BlueShore Financial’s Pender Branch and see the work we’ve done and the impact it’s making.”

Building on a legacy

Beckville’s latest industry award follows years of success within the BC market. The firm was founded in the 1980s by Beck’s father, Neil Beck, who played a lead role in training Beck for the trade. A decade later, the two became business partners and started building the company up. After his father retired in 2011, Beck led the construction of a new, 15,000 sq. ft. facility near Maple Ridge’s Golden Ears Bridge, where Beckville has been headquartered ever since.

Today, Beck continues to focus his team on delivering woodwork for a range of commercial products. The key to the company’s ongoing success, he says, is an unwavering commitment to producing top-notch products through a blend of traditional handcraftsmanship and cutting-edge millwork.

“We’ve really embraced technology here, right from our drafting and CNC equipment, to how we cut our panels,” said Beck. “The number one thing we try to do is get inside the heads of our customers and constantly explore ways of providing them a better product.” 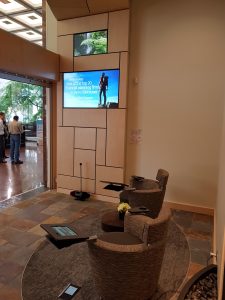 Cutting-edge approach notwithstanding, Beck adds that it’s the company’s emphasis on building sturdy client relationships that also makes the difference.

“I’m a lifelong learner,” he continues. “I like to spend my free time learning about new woodworking techniques and technologies. I’m always asking, ‘Is there a better way?’ ‘A faster way?’ ‘What products can I use to get a better result?’ or, ‘How can we bring more artistry or style to what we do?’

This philosophy has served Beckville well over the decades. And while the company’s workforce, supply chain, and overall operations have no doubt been impacted by the pandemic, Beck says it’s the company’s long-standing relationships and well-won reputation that keeps his family’s vision alive.