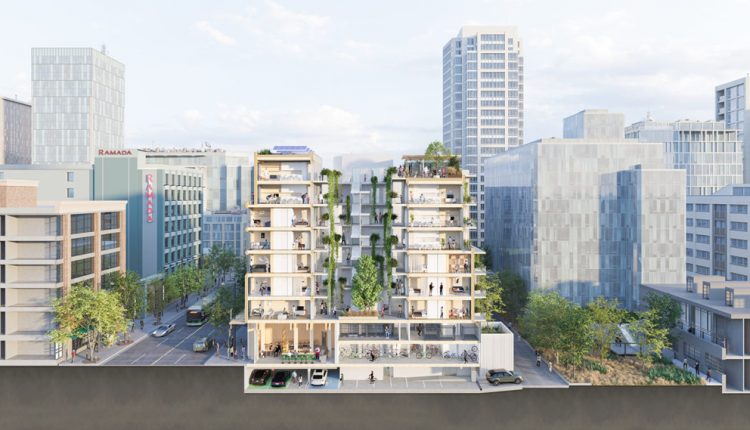 The second intake of the Province’s Mass Timber Demonstration Program continues to expand BC’s expertise in advancing wood construction while boosting local economies and the province’s competitive advantage. From a multi-purpose civic space to a taller timber residence pioneering prefabricated Passive House technologies, these five projects show what is possible with mass timber.

The learnings gleaned from these projects will benefit the sector broadly and will:

The Monad Granville Building is a rental, mixed-use nine-storey development in an infill lot in Vancouver’s downtown. It is the city’s first prefabricated Passive House mass timber residential midrise.

The project serves as a model for prefabricated mass timber construction and Passive House design standards that could be replicated in future urban housing. The building will be designed to achieve net-zero energy readiness with a path toward carbon neutrality.

Mass timber and Passive House certification will combine for the first time in the West Kootenay region of BC through the construction of The Confluence. This multi-purpose civic space will support local tourism, economic development, and Indigenous programming.

The design team will use an advanced building envelope engineered to Passive House standards to reduce the facility’s energy consumption by 80% compared to conventional construction.

The project’s ample use of CLT—comprising the walls and roof along with interior features, such as cantilevered stairs and textured partition walls—takes advantage of wood’s natural thermal benefits while storing carbon for the life of the building.

The project demonstrates how thoughtful design, offsite prefabrication, and mass timber can help maximize the use of small industrial sites.

L’Alliance Française de Vancouver (AFV)— located in the South Granville neighbourhood and serving as a community hub for French-language culture and events—will more than triple its programming space with an innovative, eco-aware and community-friendly building that showcases an exposed mass timber design.

The project will feature a mass timber superstructure—the timber components will be left exposed to the interior and include CLT decking and glulam beams and columns. Increasing timber will be a BC-first for an educational building designed for larger occupant gatherings.

It’s estimated that prefabricated panels could cut construction time by 25% creating significant savings for the project and resulting in 90% less construction traffic to the site.

Once completed, the large-scale roof structure will serve as an industry example of highly efficient timber construction, showcasing the availability and affordability of mass timber.