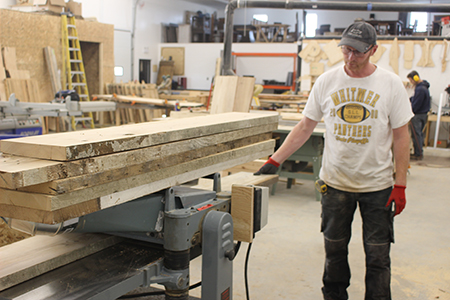 Wooden antiques are not always hidden away in upscale shops and grandparents’ homes. 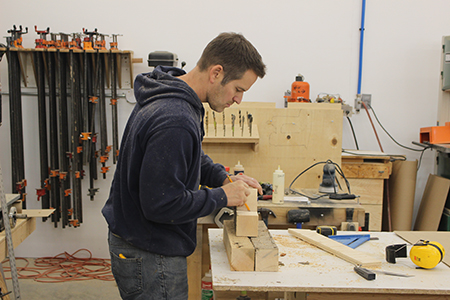 Sometimes they hide in plain sight, littering rural roads across Canada and the U.S., those once-functional buildings that helped settlers put down stakes across the continent.

For antique restorer Blayne Wyton, the dilapidated barns he saw driving with his young family across Wisconsin and Illinois inspired him to change careers and start a new kind of restoration business.

“It was August 2008 that I came up with the idea of Prairie Barnwood,” says Wyton, referring to his current company based in Morden, Man. The company knocks downs disused barns, mostly in Ontario, and reclaims the wood from walls, floors and beams to produce made-to-order furniture through its showroom and website.

Wyton grew up in Edmonton, Alta., and worked in one of the family businesses. “My grandfather owned a few different businesses. The one that I remember working in when I was around 12 years old in the evenings and weekends was manufacturing nylon tow ropes for the oil fields.

“Later, I got into refinishing antiques as well as working at the rope factory.” He also met his Manitoba-born wife in 1999 and was soon off to an auction in Winnipeg to purchases antiques for his fledgling restoration business.

“The furniture was less money here than it was in Edmonton. I started buying furniture and hauling it to Edmonton and refinishing it.”

The couple moved to Manitoba in 2001 and Wyton worked for a Honda dealership for a year selling cars before starting Windsor Furniture, a furniture refinishing and restoration company. “I had that company for 12 years, then I got into custom kitchens for about 3 years.”

During the fateful U.S. family vacation, Wyton says “they were all sleeping in the back of the van and I saw these big old beautiful barns. This thought kind of came into my mind to rip down a barn, so as we are driving I’m kind of thinking ‘what I could do with it.’”

With a history of furniture restoration and admiration the Morris and Stickley style of furniture, Wyton was on his way with Prairie Barnwood. “In restoring antiques, I was able to reconstruct furniture the way it was done a hundred years ago.”

While the family was still on its two-week vacation Wyton put an ad in the local paper back in Winkler, Man. “We ripped down our first barn in October of 2008 in Rosengarden, about 8 miles south of Winkler.”

With the one employee at the time, the two took about a month pull down the entire barn, each day taking down a bit more. “We did it fairly crudely because we really didn’t know how to do it and didn’t know what to keep. We came back to our shop here in Morden and one night I built a Mission style hall table.

“My landlord at the time said ‘that is beautiful, you should build a dining table.’ Then over the next couple of nights I built a dining table. It is known as our timber frame table now on our website. I built it with all of the original joinery — the mortise and tenon joints. Kind of like a post and beam barn in a sense.”

Prairie Barnwood took a couple of years to get going, but it started to gain some traction as the business was still refinishing furniture and building some kitchens. “It was 2010 that I decided to take the jump and just do barn wood. I focused with it online and later attended our first trade show at the Fall Home Show in Edmonton in 2012.”

The company had three employees at that time and worked steadily for a month to have furniture to sell at the show. “I left for that trade show on a Wednesday with a truck and trailer full of furniture and $500 in the bank. I paid $3,500 for this booth. I remember driving 14 hours to Edmonton thinking ‘this is it. It’s all on the line.’ We went to that show and I think that we did a month’s worth of sales in one weekend.” The business continued to do shows for a couple of more years, but now has more of an online marketing focus and an Edmonton operation run by Wyton’s sister. “She is helping me now with sales in Edmonton and customer relations.”

With a growing business, the company has just moved into a new 5,000 square foot shop with a showroom at the front and 16-foot ceilings. “There are eight of us who work here full time,” says Wyton. “We were in the previous spot for nine years and it was a larger building — 6,000 square feet — but was an old chicken barn.”

Although the chicken barn was converted it into a workshop, the company began to find it difficult to operate because of the eight-foot ceilings. “There were posts every ten feet,” says Wyton, “the doors on it were the old swinging barn doors and in the winter, ice would jam them up.”

Moving to a modern building has made life for the company much more civilized and made completing projects more efficient. “We can bring forklifts in and it is warm and bright.”

One recent project completion belongs to a customer in Winnipeg who just purchased a house and wanted it furnished by Prairie Barnwood. “We have been able to redo the whole house, furnish it and then put it up for sale. It will be the first Prairie Barnwood show home.”

Wyton no longer dismantles the barns personally, having found skilled Mennonite crews that complete the work. Often the main support beams of the structure in Ontario are 12 x 12. “We slice them up into boards and then we put them through a moulder. The wide planks from the beams are maple, oak or ash.” Some reclaimed pine and hemlock beams have come out of the harbour in Toronto, Ont., and had kind of a green hue to the wood, says Wyton. “There are a few customers who have a Toronto harbour floor now.” 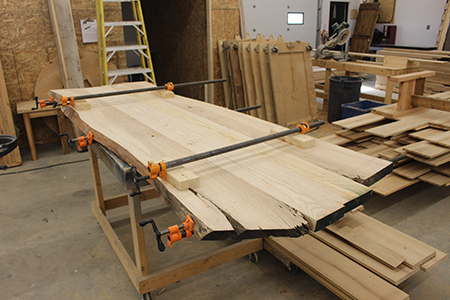 Staff at Prairie Barnwood are artisans more than they are just employees, according to Wyton. “They have to be very patient with me,” he laughs. “They also have to be very patient with the wood. Sometimes you have to pick through a lot of wood to find the right board to build a table out of. It takes somebody with a certain art form to build these pieces, including sanding them.

“When people start here I will say to them ‘think of a story.’ If this is a bench, maybe somebody sat on it with a cane outside during the 1900s and he knocked the cane at it every day. So there is a little bit of an indent where the cane touched the bench.”

Although each piece is built specifically for the customer and is primarily sold online, the company’s business model harkens back to the catalog shopping practices of a century ago. “Timothy Eaton’s (a Canadian department store chain) in the early 1900s would send salespeople out door to door and they had the Eaton’s catalogue. They would sell barns, schools, community centres and houses. There were also all kinds of furniture in the catalogue. It’s funny how I have kind of modeled that in Prairie Barnwood — because each piece is built for you, what I find is best is if we come right to your home. We sit down at your kitchen table and we bring samples and pictures.

“We sit in your home and measure the piece out. We pick out the kind of wood, the colour, the texture and the size. then we handcraft it for you. The online presence kind of gives people a chance to view what we can do, as well as research as to whether they want a rustic looking piece of furniture from like a Wayfair or whether they want a handcrafted piece of barn wood furniture from us.”

Typical customers look on the website, call into the office and make an appointment. “I have flown to Calgary to meet with customers in their homes,” says Wyton. “I will fly there for the day and set up three or four appointments and go and meet people in their homes.” The company has even flown a representative to Churchill, Man., to outfit tundra buggies that go out onto the ice for tourists to look at the polar bears. “It’s more a one on one relationship trying to understand what you as the customer want,” says Wyton, “then we are able to create it.

“The furthest we have shipped a piece was a dining table to a customer in Vancouver. He got it and put it in a sea container and shipped it to Norway. And one of the New Jersey Devils has a dining table from us.”

A challenge working with reclaimed wood is the safety issue. “If you don’t de-nail the boards properly you can catch a nail in the saw and that becomes a huge hazard to the employee.” So the company is proactive and laser-checks the wood before it sees its first saw, not just for nails but also barbed wire and the occasional bullet. “They can also get sucked into a dust collector,” he adds. “It is a huge explosion hazard.”

Preparing the wood for processing also include kiln drying, a concept that was foreign to Wyton at the outset of Prairie Barnwood. When he ripped down his first barn and brought the wood in, he thought the wood was dry and good to go. “Our first year we built ten or twelve projects for customers. They called me back the second year and said our doors are warping and twisting. I didn’t know the wood had to be kiln dried.”

But a problem persisted through the second year of operations because he didn’t know that the barn wood had to be dried to the correct temperature level. “Our third year we rebuilt everything from our second year. Even though we kiln dried it to get rid of the moisture, we didn’t dry it hot enough to get rid of the bugs. It took three or four years just to learn how to work with 100-year-old barn board.”

Wyton feels that the entrepreneurial gene is both a blessing and a curse, but is happy his 89-year-old grandfather is around to see his success. “I think that is pretty exciting for him to see the seeds that he had sown years ago come to fruition,” he says. And although it has different owners now, “his rope company is still going in Edmonton.”

Software success: production is not magic