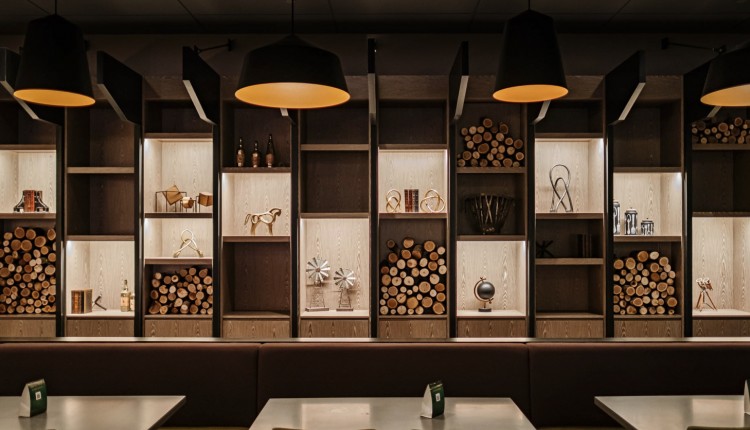 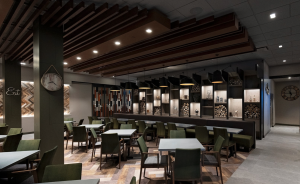 The winner of the Small commercial project award was North Forty Fine Furniture for the Union Station Restaurant + Bar project. This project incorporated custom millwork into an existing historical structure. Constructed in 1911-12, Union Station brought the Canadian Pacific Railway and the Canadian Northern Railway together under one roof. A major hub of both western Canada’s railway system and the booming city growing around it, the building was designated to exude both classical elegance and bold optimism for the future. Today, the new Union Station Restaurant + Bar pays homage to that legacy.

The millwork is stunning, blending many different wood species. There is a continuous front-facing feature wall that starts on the face of an existing wall, becomes self-supporting, angles, and ends at two columns with a cantilevered jagged solid wood countertop running through. Glass and metal panels are incorporated throughout this feature wall, a work of art!

North Forty is a locally owned, custom commercial millwork shop located near Regina. The company began by producing custom furniture but transitioned shortly after focusing exclusively on the commercial millwork side. The designer for the project was Kasian Architecture and the general contractor was PCL. 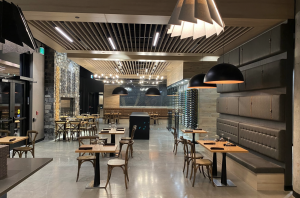 The winner of the Large commercial project was Hy-Grade Millwork for their Whitecap Hotel project. The Dakota Dunes Resort is located on the traditional Dakota Unceded Territory; Dakota Dunes Resort is Saskatoon’s first full-service resort experience. Offering guests an authentic Indigenous experience while providing the highest quality of entertainment and tranquility, the wide range of services and amenities are sure to leave guests feeling relaxed, energized, and inspired. The enormous project included everything from the boardrooms, to dining rooms, to guest rooms. 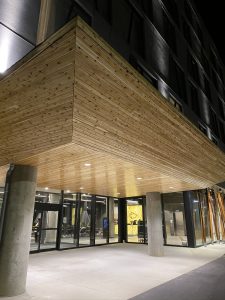 Floors two to five of this hotel were quite similar, with roughly 30 rooms per floor, varying in size, but mirrored each other in quality. As you transcend down the staircase from the rooms, you enter into an entirely different level of design, from the cedar on the canopy to the backlit 3Form acrylic that integrates into the main part of the desk. Down the hall, you have a gift shop, restaurant, and a stunning dining room filled with high-end finishes. Seventy feet of angled wall paneling lead you from the hotel to the casino — a unique and very beautiful hotel.

This project was also the winner of the Kerry Depape Award of excellence. The judges chose this award out of all the nominations submitted to the AWMAC 6th Annual Awards Show. Kerry DePape was an instrumental part of AWMAC both at the Saskatchewan Chapter level and with AWMAC National. He was instrumental in writing the North American Architectural Woodwork Standards Manual. This award should exemplify the quality and integrity that Kerry stood for and believed in. 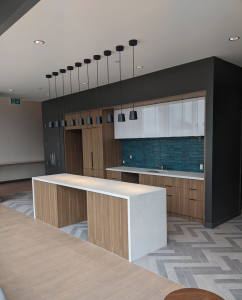 Hy-Grade Millwork is one of Western Canada’s premier solid wood component manufacturers. They began in 1927 as an architectural millwork and sash and door manufacturer. Over the past 80 years, Hy-Grade has invested in equipment technology that enables them to diversify their product offerings and move forward with the current building trends. The designer for the project was aodbt architecture + interior design, the general contractor was Ledcor Construction, and the installer was Cyprus Construction.

The winner of the GIS award was also Hy-Grade Millwork, this time for their Riverlanding Nutrien Tower Base Building. The 18-storey tower is being built with an eye to the future, exceeding global standards for sustainability, safety, and technology. From the ground up, Nutrien Tower will be an environmentally responsible, energy-efficient building, with developers targeting LEED Gold Certification. The top nine floors will house Nutrien’s executive leadership and corporate teams. Modern and flexible spaces will support our large and growing Potash, Procurement, Finance, Information Technology, Human Resources, Legal, Sales, and Sustainability teams in Saskatchewan. Hy-Grade’s work is featured in the lobby, kitchens, and rooftop amenities.

A stunning element of the project is the rich French Walnut reception desk clad in stone tile. The 18th floor boasts a large pergola made out of Red Balau hardwood from across the seas. Multiple floors, each with a custom French walnut cabinet and mirror for the bathroom. The 18th floor consists of aluminum laminate on ceilings and walls and 2” wide rift-cut white oak.

The ceiling of the project also won the Special Feature award. This enormous feature is a wave-like grid that covers the entire ceiling. This feature ceiling has over 235 pieces ranging from 6’ to 4’ in width and from 6.5’ to 8’, and over 230 brackets and air cables were used to hang this ceiling. This ceiling literally went up piece by piece, 34’ in the air. For both the base building and the ceiling, the designer was Gibbs Gage Architects, the general contractor was Ledcor Construction, and the installer was Keyway Contracting. 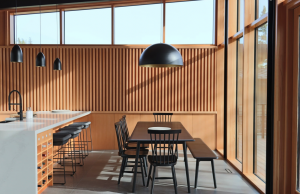 The winner of the Residential project was LINN Millwork for their Kapasiwin Cabin project. There is extensive millwork throughout the home, from built-in furniture, panel walls, cabinetry, and closets. LINN’s touch can be seen in every room, from the kitchen to the bathrooms, living room, and bedrooms. The Kapasiwin Cabin capitalizes on Douglas Fir and colored Lacquer MDF Cabinets, customized bunk beds, and king bed with integrated headboards and side tables, including electrical. The kitchen consists of built-in appliances with bulkhead cabinets; lining everything up to fit seamlessly and fit into the existing structures was complicated, but the results were amazing. 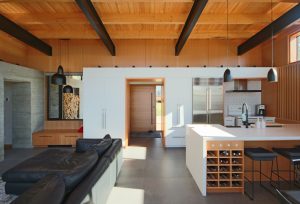 The project was so successful that it also won the People’s choice award. This award is chosen by everybody, manufacturer members, supplier members, architects, interior designers, general contractors, and other design community members.

LINN Millwork was incorporated in January 1990 by Rick Koehn. Over the years, the small shop started to specialize in commercial millwork and established a solid clientele. In 1997, LINN Millwork moved into a 12,000 square foot building and invested in high-quality, precision machinery. Today LINN strives to provide custom commercial millwork to the growing Saskatoon market. The designer for the project was Oxbow Architecture and the general contractor was Dan Watt Construction.

Congratulations to all the winners!