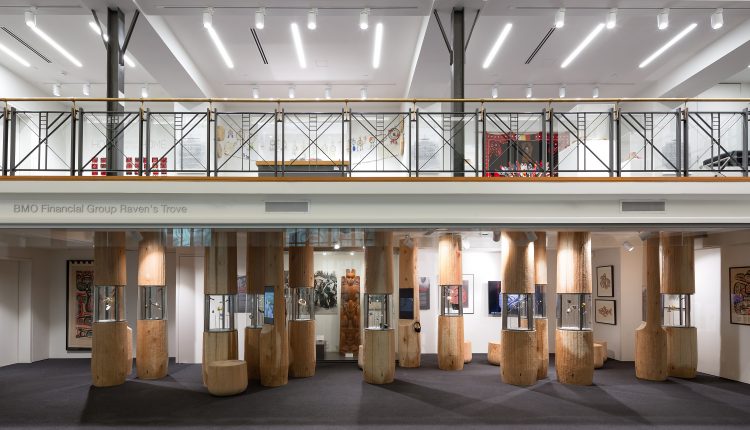 The redesigning of the Raven’s Trove at the Bill Reid Gallery of Northwest Coast Art in downtown Vancouver was a near-perfect project for my studio: requiring all my talents and skills as a creative, industrial designer, woodworker, project manager, and complex problem solver. In 2018, I was asked to submit a proposal to redesign the small but important space. The brief was, in short, to create a permanent exhibit space to safely house and display several dozen priceless jewelry pieces by the Canadian icon and master Haida carver Bill Reid (1920-1998).

Although I was delighted to have won the opportunity, I recognised there would be significant challenges: not least to elevate artwork from a community that I didn’t belong to and has been misrepresented repeatedly over the last 200 years. I knew from past work that a strong and meaningful initial concept would be the key, resulting in a meaningful space that would celebrate the importance of Bill Reid’s artwork without overshadowing or undervaluing it. 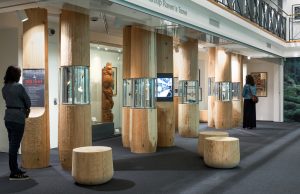 The concept took shape after I learned that the Haida have long believed that a generous indigenous band member, after death, would return as a Cedar tree, so they could continue to serve their community. The gallery was founded as a testament to Bill Reid’s work and his commitment to supporting future local indigenous artists. After learning this, it felt too poetic not to use the cedar tree, and its strengths and limitations define the exhibit’s design.

After proposing three concepts and evaluating their merits, the solution was clear. The resulting concept was a simplified forest of cedar poles that receded when guests neared, allowing the jewelry to take centre stage. The “forest” would be made up of 10-20 poles, most with display cases at their centers, others with graphic panels or monitors sharing additional information with the guest. It would be simple and built using locally sourced materials by businesses and craftspeople with a history of helping their community and doing exceptional work.

The existing space would be open-concept, and the cases would have to be designed so that visitors could see all aspects of every piece as most are detailed on all sides. 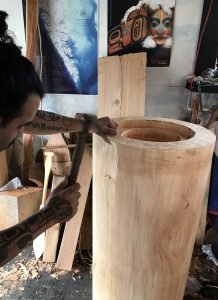 With the help of master Haida carver James Hart, the gallery’s curator Beth Carter, I carefully selected a dozen of BC’s finest craftspeople and professionals from Ladysmith to Gibson and many places in between to work with me to create the many complex parts of the exhibit. Now that the space is complete, I can’t imagine any other design solution with which I would be happier. I learned a great deal about Bill Reid and other local Northwest coast artists and how their work empowers a future generation of indigenous people to celebrate who they are. This project was also informed my own work, furthering my commitment to work locally with passionate and ethical people and businesses.

The design took shape over three months, requiring solutions to a myriad of complex challenges. One issue was how do you sandwich a glass case between two 600 Lbs logs and ensure the irreplaceable and delicate objects within are safe from theft, humidity, fire, and damage in the event of an earthquake? Additionally, the cases would have to house 52 jewelry pieces, each independently lit, easily accessed by staff, and capable of accommodating visitors of all ages and abilities.

I am an industrial designer by training and have been primarily a furniture designer and manufacturer for the past 20 years, a role that requires me to wear a variety of hats. This project was no different: I was responsible for every aspect of the project from concept to fruition, including redesigning the architectural elements within the Raven’s Trove; creating and managing the budget; designing engineering; and creating all the display cases, internal signage, and furniture; as well as their assembly and installation. 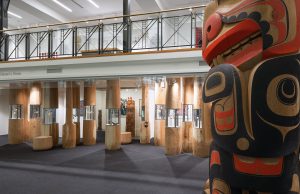 I found and worked with a dozen experts in glass-forming, electronics, lighting, security, indigenous carving, log turning, precision metalworking, artifact conservation, and seismic engineering to realize the design. However, the first obstacle was to find the clear western red cedar logs at a reasonable price.

After many visits to logging operations, I finally sourced eight western red cedar from logs that were two feet in diameter and forty feet long from central Vancouver Island. The owner of a small mill selectively logged telephone poles on their land with his father.

I then arranged for a small independent millwright to mill the logs to shape in a remote part of the sunshine coast. Over a couple of weeks, using a machine he modified specifically for the task, Dan Neufeld (a former mechanical engineer and millwright) turned, cut, and bored each truncated pole to a specified accuracy of +/- 3mm.

One of my favorite aspects of Haida wood carving is the surface texture. Haida carvers use hand tools called an adze for larger work. The blades of these tools are very sharp and slice through the wood fibers in such a way to cut wood shimmer. This undulating texture is unique to the adz and has an unmistakable human quality quite different from a sanded or machined surface. After consulting with Haida master carver James Hart (responsible for many of Bill Reid’s most impressive sculptures), I engaged Corey Bulpitt. Corey learned traditional Haida carving from Hart and several other indigenous master carvers who have led the resurgence of the previously fading art of Adzing following Reid’s lead. Corey was incredibly generous with his time and knowledge, and together we textured the surface using arguably the world’s oldest wood carving tools. What an honor. 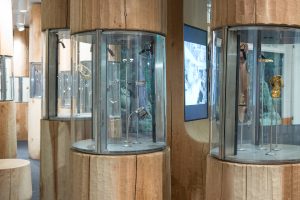 I designed 12 truncated stainless-steel cases to house the jewelry, with internal wiring and hardware for the security systems, future AV devices, and lighting, hidden behind stainless plates at the top and base and secured with magnets. All was hardwired to a central server through a hole in the top of each cedar pole, making it easy for staff to monitor and control the exhibit space. Each case was carefully engineered to carry the 600 lb log above and remain intact under seismic load. Using fiber tube lasers to cut the steel tubes and 1/2″ steel plates, we could meet the exacting tolerances the cases required to be assembled without issue.

The cases were each fitted with three removable custom curved glass panels. They were created in a small glass studio on the outskirts of Vancouver; each panel was cut, then slumped using a custom form, trimmed, and then hardened in a bath of molten salt to maintain a required tolerance of +/- 0.5mm. This technique was favoured over tempering, which can distort the glass. I designed an alarm system for each glass panel to secure the glass, allowing the curator to access and rearrange the jewelry easily.

The Raven’s Trove gallery is only one portion of the Bill Reid Gallery. All of which have been refinished with new exhibit spaces. Merrick architects and Scott construction were responsible for the rest of the space, which houses a wide variety of exceptional work from local indigenous artists. I urge you to visit the space if you have the opportunity to learn more about Bill Reid’s work and legacy.