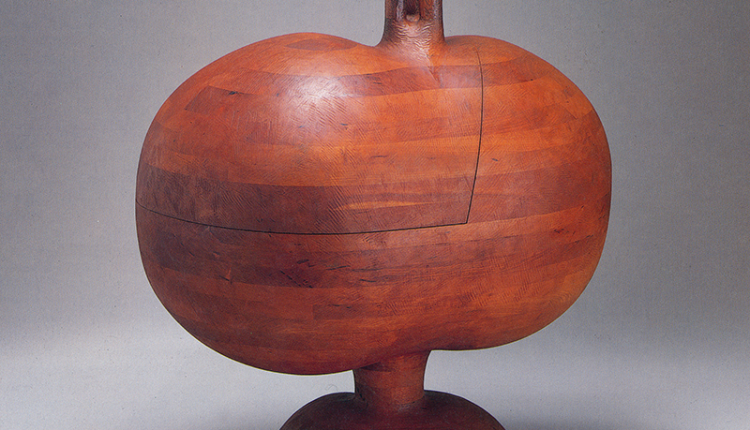 In the early ‘70s, there was a show called WoodenWorks at the Renwick Gallery, which is a part of the Smithsonian Institution in Washington D.C. Now we would describe it as a show of studio furniture, then emerging as a vital component of the Contemporary Crafts movement. Three of the five designers represented would go on to have an oversized influence on this emerging discipline. I was lucky enough to see the show, as an eager student and prospective studio furniture maker myself.

The oldest of these was George Nakashima (1905-1990). An American of Japanese ancestry, he was interred during the War, but then went on to make a major contribution to American culture anyway. He loved wood and did his best to reveal its natural beauty, working frequently with the flitches of wain-edged wood that we now call live-edge.

He travelled the world to find trees worthy of his work and then used them with great respect. It’s an indication of its cultural significance that his work sells at auction for much more than when he produced it. But what I find to be the most interesting is that within all the live-edge activity that we are experiencing, no one is doing it better and even rarely as well.

He developed a style and he remains the master of it. I subsequently was lucky enough to get to know him a bit, but found him to be a bit less than friendly. He deserved to be proud and the internment experience may have influenced his sociability.

Sam Maloof (1916-2009) worked in design in a number of ways before he found his destiny as a maker of exquisite furniture. His style was heavily influenced by Danish Modern, but he interpreted it in his own way, with a mastery of blended edges, evolving sections and graceful lines.

His work is entrancing to look at and lovely to touch. Not surprisingly, he has often been imitated — especially his signature rocking chair. What I find curious about that is that I haven’t seen one of these “works of homage” that wasn’t somehow clumsier or heavier-handed.

The master knew what he was doing and his imitators don’t quite. I also knew Sam a bit and he also could be arrogant. He came by that honestly and was, by all accounts also generous and magnanimous.

Wendell Castle (1932-2018) trained as an industrial designer before forsaking that for sculpture. And his furniture is certainly more sculpture than anything else. He was fantastically creative and had a powerful sense of form that was without peer. He was creative in every way, both visually and technically. He evolved many techniques, not because he was technically minded, but as routes to the expression of his creativity.

He would do what it took to get to where his imagination led him. He was hard to imitate, because to do so, you would need to be a master of form as well, and not many are, at least not in his league. Of the three, I knew him the best. Of course, he could be arrogant too.

I mention the arrogance because I think that these individuals were aware of the role they were playing and their worth. My observations are not critical, rather they are an acknowledgement of these men’s importance. It’s good that they knew it.

They played an outsized role in the flourishing of the studio furniture field that they helped create. They were pioneers and, to their credit, not subsequently equalled. It is in the nature of design that older designs are improved upon, gradually and sequentially.

In their case, this hasn’t happened. They defined their styles and their work remains the benchmark.

I was very impressed as a youth, and unlike what usually happens, I have retained my over-sized respect.

I was fortunate to get to know them and to experience the development of their oeuvre. They have passed on now, but their influence will cast a broad shadow for a long while yet. I’m happy to cheer for them.

Paul Epp is an emeritus professor at OCAD University, and former chair of its Industrial Design department.