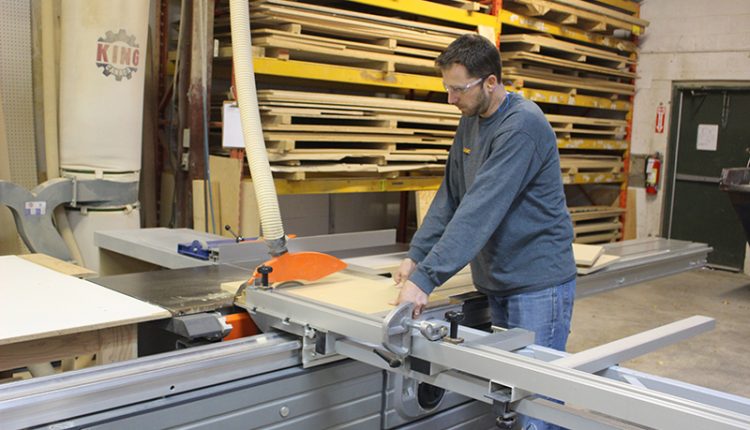 Another box builder? No.

Co-owners Randy Gunnink and Dan Nobel both have Red Seal Journeyman Certificates in Cabinet Making and have an easy way to remember just how long they’ve been in business together: “as long as Dan’s been married,” says Gunnink.

The combined expertise of the owners comes with more than just their time together and both being medal winners in the Manitoba Skills Competition. Gunnink has been in his trade since 1995, working in various cabinet shops in Canada and Australia, and is certified in Architectural CAD Technology.

Nobel has been in his trade since 1999 and takes care of the renovation and installation side of Mosaic Millwork, while Gunnink manages the shop. “We’re definitely both from hands-on backgrounds,” says Nobel, “and we are from the same community as well — I was working for Randy as foreman at my first shop.”

Mosaic Millwork was started off of the back of another company that went into receivership. “As a result, there was a large amount of equipment floating around that needed a new home and space,” according to Nobel. “We picked up the space in here — about the same as a double garage.” From there the company has grown to its current size of about 7,000 sq. ft., in part by maintaining a good relationship with the landlord. “As we grew, we just asked for more space,” says Nobel, “and were able to add as needed.” 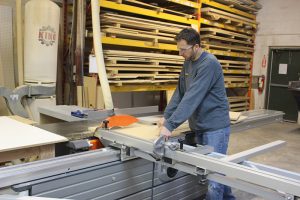 While their current works interests are the same, the co-owner’s backgrounds do differ. “My Dad couldn’t hold a hammer,” laughs Nobel. “I don’t know where I got it from.”

In contrast, Gunnink’s father was more hands-on. “He was in the construction industry for a number of years and did a lot of work at home,” says Gunnink.

The first employee hired at Mosaic was in 2006, about a year after the company started, coming all the way from Alberta. Finding suitable staff is a challenge, but Gunnink notes that he finds the most successful way is through recruiting agencies. “You can find very specific talent,” he says. “We tried the Kijiji route, but it comes with its own set of problems and challenges. Then everybody is applying, even if it’s as a dishwasher, janitor or taxi driver.”

Mosaic Millwork has also recruited from the summer placement program of the nearby Red River College wood processing course. “They are required to pick up part time work from a shop in the city,” says Nobel. “One student returned after he got his certificate and is now one of our employees. “It is always a challenge to decide if you want to hire unexperienced and train them or hire experienced — there’s a balance you have to strike.” 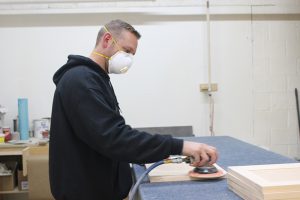 According to Nobel, Mosaic has always targeted the mid- to higher-end of the residential market, with about 10 percent of business coming from the commercial side of the market. “We are more interested in doing the unique stuff,” he says, “There are plenty of box builders out there — we are not interested in getting into their field.”

Mosaic started just as a millwork cabinet making company but has “morphed into a general contractor as well,” says Nobel, “just as a result of being able to better service our clients.” By taking care of everything, there is added value as the customer only has to shop in one place, he adds. “They get everything from design work, permits, everything up to the last screw in the cabinet. They really appreciate that.”

Over the time that Mosaic has been in business customer tastes have changed, a factor that has altered the product it creates. “We used to do much more stained wood,” says Gunnink. “Now we are getting into more glossy, solid colours, and some natural woods — but not as much.” The company also designs and supplies countertops, primarily quartz or stone countertops (fabricated by a third party), as opposed to laminates. 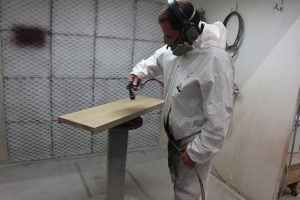 The company is mindful of health and safety on behalf of its employees, as well as government inspectors. “We have dust collectors and a heat recovery unit in our spray booths,” says Gunnink, “as well as air filtration systems for all of our sanding.”

Being in a residential neighbourhood, it also strives to have a low impact on the environment. “We make sure we take the necessary steps to be compliant and have never really had an issue,” Gunnink says. “And inspectors are pretty sticky. They come around often enough to keep us on our toes.

“We like to keep a nice clean work environment that helps as well for the
safety and happiness of our employees — there are six of us running around now.”

Juggling projects with a compact staff requires planning and good customer relations to ensure ongoing success for Mosaic Millwork. “We like to have two or three kitchen renovations going at a time,” says Nobel. Although kitchen renovations are still the best source of work for the company, it been doing a lot more bathrooms lately, he says. “A whole package deal can be a challenge. Some projects take three or four months, some a couple of weeks.”

Depending on the size of the projects, the company will complete four to 12 renovations per year, according to Gunnink. “People are definitely more knowledgeable now,” he says. “They know what’s out there and what they want.”

Occasionally, however, there is no avoiding “time-killing” projects, says Gunnink. “Once in a while they fall in your lap. ‘Discerning’ customers are what they are called.”

The big part of the company’s job is service — taking care of people. “Punctuality is a big part of it,” says Gunnink, “being where you say you are going to be. Taking care of our customers until the last screw is in the cabinet. The job you do is your advertising.

“You want to know they are going to refer you.”

Nobel adds, “there is a set of procedures we go through to get the job done right.”

Mosaic Millwork tends to partner more with interior designers than architects. “It has helped us understand what we are going to provide, especially with perspectives. The customer feels like they are in the space. You can’t get away with a simple line drawing anymore.”

Custom furniture has also emerged as part of the business, such as entertainment units, fireplaces, bunkbeds, tables and RV interior renovations, as well as wood paneling, stairs and railings.

“There isn’t too much we haven’t touched yet,” says Gunnink.