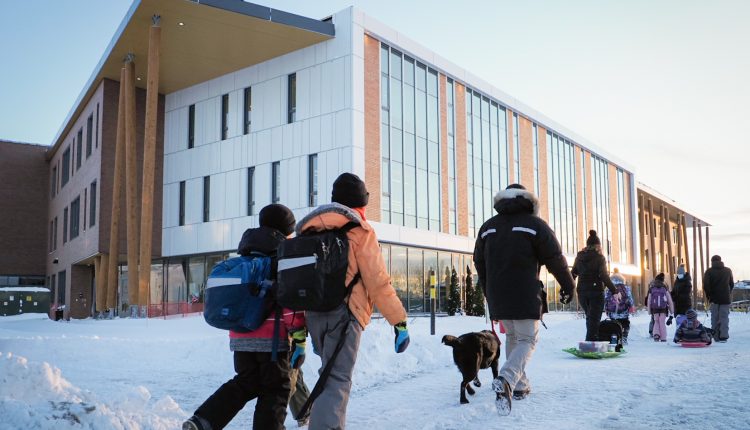 Just a few weeks ago, the 650 students of the new school in the Longueuil region discovered their new premises in the first three-storey school building to be built with a wooden structure in the country. This project was made possible thanks to an investment of more than $36 million, mainly from the Ministère de l’Éducation, but also from the Ville de Longueuil and the Ministère des Forêts, de la Faune et des Parcs.

From the beginning of the design process, a wooden structure was considered for the environment and student well-being, even though the code limited wooden construction to two floors for elementary schools. Believing in their project, the designers of the Vauquelin School chose to submit an alternative solution to the Régie du bâtiment du Québec (RBQ).

A preliminary study determined that an engineered wood structure consisting of joists and beams supporting wood slab floors could achieve a reduced overall building height while providing adequate room height compared to a school with a steel joist structure. The height of the school became beneficial to the design team. The engineers optimized the height by proposing systems that would free the classroom ceiling from any ventilation ducts, thus highlighting the wood structure. From a budgetary point of view, the choices made by the designers to reduce the height of the building contributed to reducing the exterior envelope surfaces, the size of the staircases, and the volume of ambient air to be treated, to name a few.

The design team was able to demonstrate, through fire modelling, that the proposed school layout incorporating a massive engineered wood structure was just as safe as if the structure was composed of non-combustible elements. The equivalent measure was prepared by Technorm in collaboration with the Centre de service scolaire and Leclerc architectes and funded by the Ministère des Forêts, de la Faune et des Parcs. The design team had to demonstrate that their three-storey solid wood proposal was just as safe as if the building were non-combustible.

This methodology resulted in 75% of the surface area exposed wood in the classroom ceilings and a 100% exposed wood ceiling gymnasium. In several places inside and outside the building, glulam posts and beams are also exposed. Students can see this innovative structure and benefit from its biophilic effects on their well-being and concentration.

The official opening of the new building will take place in spring 2022.

Katia Lavoie holds a bachelor’s degree in communications, with a journalism option, as well as a certificate in industrial relations from Université Laval. Currently, she is responsible for all Cecobois content and publications, including the infoBOIS newsletter and the Construire en bois journal.

NB Levels up in Automation and Innovative Solutions