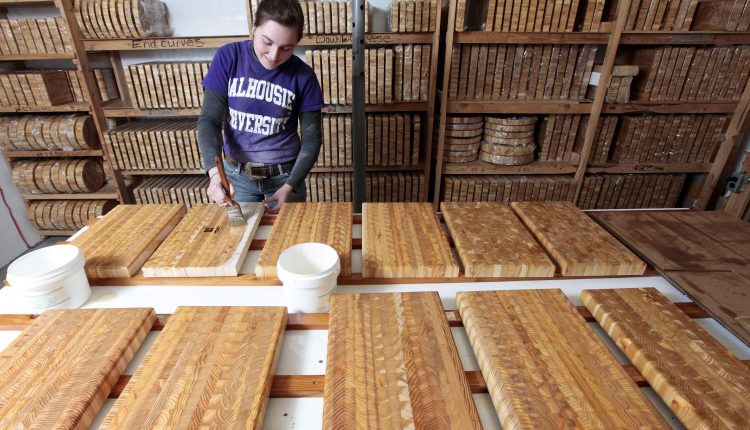 Looking back, it was the housewarming gift that kept on giving.

The year was 2004, and Don Beamish was about six months into his new job as General Manager at Larch Wood Enterprises, a sawmill, and flooring company based on the banks of Cape Breton Island’s Margaree River.

Owner and entrepreneur Ben Webster had purchased the 14,000-sq.-ft. facility from a bankrupt business the year before, and it didn’t take long for Beamish and his team of craftspeople and artisans to see that producing tongue-and-groove larch flooring—the only product they were making at the time—wasn’t going to sustain them. The search was on for new products to make and sell.

As fate would have it, Webster happened to be moving into his new home overlooking Cape Breton’s western shores at that time, and so Beamish and his staff created a cutting board as a housewarming present. It was only meant as a one-off, a way for the staff to wish their colleague well in his new home. But the look of it when it was finished inspired them to consider the possibilities. Now they sell at almost one hundred retailers across Canada, and over two hundred retailers across the United States.

When they were first starting up, they made three prototypes and sent them to local chefs for their thoughts; those expert testers came back with two enthusiastic thumbs up. Next stop: the 2005 Atlantic Craft Trade Show in Halifax. That show went surprisingly well,” says Beamish, and from there they were hitting the road attending wholesale and retail shows in Toronto, Montreal, New York City, Philadelphia, Orlando, Las Vegas—anywhere their truck would travel to get them in front of buyers with their handcrafted cutting boards.

Though the company started producing both end grain and edge grain boards, it chose to focus on end grain boards after a while. “We could see a beautiful pattern in the end grain,” Beamish explains, adding that not only does the end grain do a better job displaying the varied gradients of the tree’s growth, it’s also more durable with a density that better absorbs blade action and makes cutting easier on the wrist.

While Beamish and his team were busy hitting the road and signing up business partners like U.S. kitchenware retail chain Williams-Sonoma, the company was also transitioning to a hybrid production/retail operation, opening shops in nearby East Margaree and in Wolfville, a university town in Nova Scotia’s wine country that attracts tourists in search of fine wine, Nova Scotian hospitality and locally crafted items. Larch Wood also ramped up its online marketing, creating an Amazon store and launching its own multi-lingual retail website to attract customers from around the world.

That last decision proved to be a particularly good one in light of recent events. “Our web sales went up 500% [in 2020] over the previous year,” Beamish says, crediting that explosive growth to the fact that many of the people spending more time at home because of the pandemic were also spending more time cooking—making them the perfect market for Larch Wood’s cutting boards.

If this past year has taught Beamish and his team anything, it’s that opportunity can come when you least expect it, but that’s not to say you should sit at home waiting for it to happen.  Before the travel restrictions brought on the pandemic, Beamish—a man who carved his own path, moving from Ontario to the Maritimes at a time when folks in search of work tended to travel in the opposite direction—has wandered as far afield as China to meet with buyers (a decision that has so far led to eight years of solid sales in the world’s most populous nation). Today, all that travel and networking has paid off, with about 45% of the company’s sales coming from Canada and the rest from U.S. and international customers.

“They’ve always been easy to sell, frankly,” Beamish says when asked how his team approaches selling the boards to international buyers. “People are just attracted to them.”

Even so, he and his staff of about 20 full-time and seasonal workers aren’t resting on their laurels. While their cutting boards continue to be their top sellers, since 2012, Larch Wood has built on its exporting and marketing expertise to ship chopping blocks, stools, and custom countertops across Canada and abroad, with orders coming in from as far away as California and the Bahamas. (They still make flooring, though Beamish estimates that now accounts for about 5% of their revenue.)

Whatever the future might bring, Beamish feels his company is well-positioned to handle it. The tamarack and hackmatack wood comes from locally-owned woodlots and is harvested sustainably. Beamish doesn’t see any reason why that should change any time soon. A self-confessed “conservative” planner, he credits Larch Wood’s relatively smooth transition into an exporter of finely crafted goods to their deliberate desire to grow steadily as a “healthy holistic business” that puts its people and the environment ahead of profits.

That approach has not gone unnoticed by their friends and neighbours. Larch Wood has become an integral part of its surrounding community, with its boards proving a popular go-to gift idea for employees and local folks celebrating special occasions. And when the tourists come back to join them amid the natural beauty of the Cabot Trail, Beamish and his team will be there to greet them. Or maybe just his team; it all depends on how soon he can get back on the road.

“I’ve spent too much time in front of this computer,” he laughs while reminiscing about his road trip adventures. “I’ve made a lot of good friends on the road over the years. I’ve helped a lot of people, and they’ve helped me.”

The Beginner’s Guide to Flat Table CNC Machines Or, What to Expect When You’re Expecting a New CNC