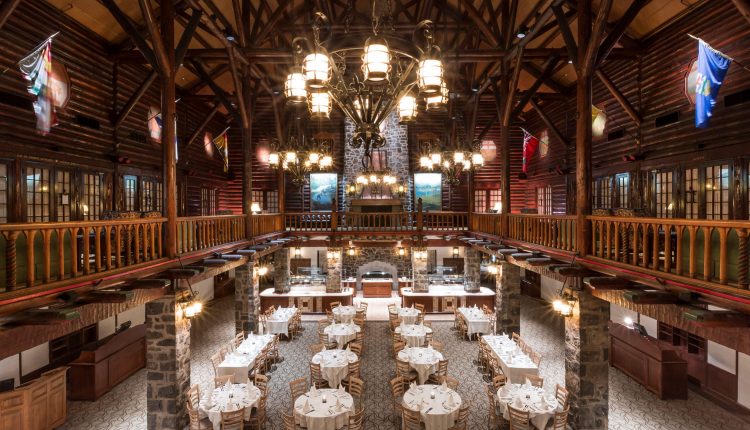 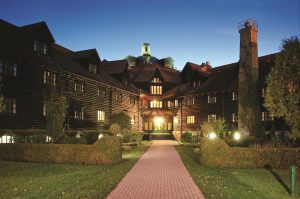 Opened in 1930, Le Château Montebello is a historical hotel and well-known Canadian landmark. The resort’s hotel building is a 4,000,000 cubic-foot wooden structure and is the largest log building in the world. The rustic-styled hotel contains 210 guest rooms and suites. Initially owned by the Canadian Pacific Railway Company, the building is considered one of Canada’s grand railway hotels. After its completion, the property was leased to the private Seigniory Club until 1970, when the Canadian Pacific Railway converted the property into a public resort and is now owned by the Fairmont chain. 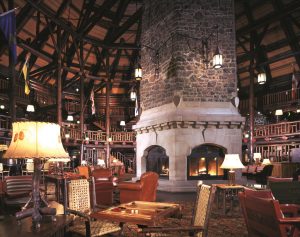 For over 90 years, the Château has been known for its rustic charm, superb architecture, and beautiful natural surroundings. The resort finds balance in preserving heritage by keeping the building as original as possible, keeping the logs mostly untouched, and focusing on tasteful refurbishment inside the building such as carpet, furniture, and accessories.

Montebello faces an interesting challenge in blending the mechanics of a 90-year-old building with modern processes. Moreover, an historic hotel’s maintenance and renovation costs can go up to double the average prices. 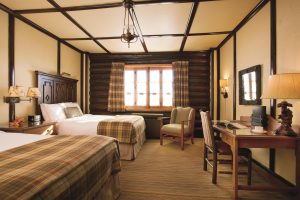 In 2018, the Château embarked on a year-long renovation process for half its guest rooms, totalling 102 newly refurbished rooms, including one brand new suite created by turning two guest rooms into a beautiful one-bedroom suite.

Combining clean modern lines with owned heritage antiques and accessories, the spaces in the hotel celebrate the local aesthetic and culture that exudes the evolution of Québécois life. Rich natural tones and finishes bring the rustic environment inside, which has always been a key part of Fairmont design. And, of course, well-thought touches of amenities and accessories relating to the sporting nature of the region keep the guests in touch with their special destination and unique experiences in Montebello. 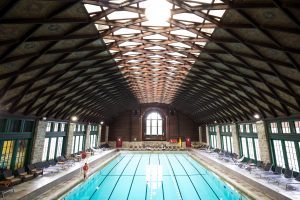 At the forefront of the renovation project is the wish to preserve and renovate this icon of the region’s heritage and ensure its continuity while adding a contemporary dimension that will enable it to meet the highest expectations. FRANK Architecture & Interiors was able to successfully help the resort transition to a modern style that remains respectful of the hotel’s history and essence. Also, in June 2009, the resort introduced a new conference facility. The free-standing addition is located at the east end of the resort and linked to the main building through an underground tunnel. The facility adds 6,000 square feet of much-needed meeting space to accommodate larger groups hosting meetings, conventions, and social functions at our historic hotel. In keeping with Château’s style and ambiance, the new facility was carefully planned with architects from ARCOP in Montréal to portray the unique wood exterior synonymous with this resort. 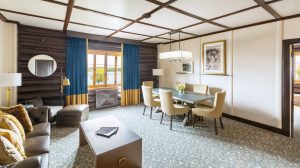 The most eye-catching aspect of the resort is definitely its unique architecture. The project was the dream of a Swiss-American named Harold Saddlemire, who was inspired by the châteaux of the Swiss Alps. A Finnish master-builder named Victor Nymark supervised the construction and woodworking teams, who were as many as 3,500 at the peak of construction. Artisans used 10,000 red-cedar logs to build the resort’s three main buildings, all cut and set by hand. In February of 1930, the site where the hotel now stands was a clearing in the woods. Just four months later, the massive cedar Château was complete: a building feat that captured the time’s popular imagination. Today, the resort is described as an authentic Canadian experience. With its six-faced fireplace, cozy chairs, atrium-like structure, and cozy ambiance, the main lobby is where guests come to relax and rejoice. It is sure to make them stop and stare, awakening their curiosity and wonder.

Hiring Co-ops? Ontario’s Co-operative Education Tax Credit is a Must